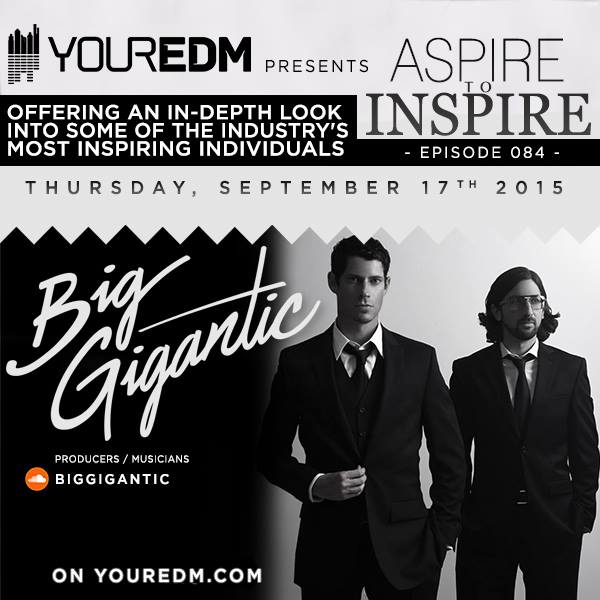 Back in August I had the opportunity to go to HARD Summer, one of Los Angeles’s most iconic festivals, regardless of genre.  One of the items on my agenda was to interview Colorado electro-jazz duo, Big Gigantic.  I found two guys who not only make some killer tunes, but two men who are very dedicated to making the world a better place and inspiring others to take action.

Most people want to make a difference in the world; however, many may not have the platform or means necessary to do this.  Fear not, because, you can start from scratch, achieve greatness, and make a difference in your community.  There’s no better example of this than Dominic Lalli and Jeremy Salken, aka Big Gigantic.  Ever since the Colorado natives have risen to prominence in the electronic music scene, they’ve used their position as a platform to help their community and make a positive impact on the world.

Best known for their rousing live shows (most notably their yearly Rowdytown show at the legendary Red Rocks Amphitheatre in their home state of Colorado) Big Gigantic makes their presence felt on stage and off.  Although the guys’ day-to-day lives are consumed by music and the grind of working in the industry, they maintain not only a positive attitude, but also a proactive approach to lending a helping hand.

One of the guys’ proudest accomplishments is their charity initiative, #ABigGiganticDifference.  Once Dom and Jeremy gathered a following, they knew that they could inspire their fans to do something that they love and give back to their community. As Jeremy puts it…

“It made sense. Once Big Gigantic was going, it was like, oh cool. Here’s a platform to be like, hey, you’re into us, and here’s what we’re into, giving back.  Here’s a way you can give back to people, and the Big Gigantic Difference kind of came up with our fans that were really into Big G, the music scene, and community.  And we wanted to take it a step further by encouraging them to be active in their communities in whatever capacity they could.”

These dedicated fans who take it to the next level are the Lil’ G’s.  You can find them at any Big G show and volunteering in their communities.  The Big G website describes the Lil’ G’s as such: “The Lil’ G’s are an inspiring group of individuals dedicated to enhancing the fan experience at Big Gigantic shows. While keeping good vibes flowing and doing their part to spread love and positivity within the music community, Lil’ G’s are creative, enthusiastic, passionate, reliable and giving.”

One of the requirements of being a Lil’ G is giving back to your community, and it’s through the Lil’ G events that fans can connect with the guys, other fans, and give back. As Dom said the guys are hippies at heart and they care about their community, a lot.

“We’ve always been about community and helping out others because we didn’t come from anything. We needed help, and people helped us out.”

The guys recently hosted a Lil’ G event over Labor Day Weekend working to restore the bike trails at Valmont Bike Park in Boulder.  Valmont is a 42-acre bike park with natural terrains for many riding styles.  It is a free park that is open to the public.  A perfect example of Dom and Jeremy and their highly dedicated fans finding a way to give back to the community they love.

Before Big Gigantic, Dom and Jeremy each volunteered for a non-profit called Conscious Alliance, a group that brings hunger relief to impoverished communities in Colorado. The guys still partner with Conscious Alliance through their Electric Family bracelets.

Dom and Jeremy were also some of the first artists to collaborate with Electric Family on their trademark bracelets that have proceeds benefitting various charitable organizations.  Big G has used these bracelets to continue support for the charity that started it all for them, Conscious Alliance.  Electric Family has bracelets supporting the charities and causes of multiple artists including Blasterjaxx, Zedd, DJ Snake, and Skrillex.

For Dom and Jeremy, there’s no cause too big or small.  Whether it is flood relief in the Centennial State or volunteering at a local food bank, Big G is always hands on in their efforts.  No small task, given their busy touring and recording schedules.  Despite all of this, the guys remain down to earth regarding both their music careers and philanthropic endeavors.

The guys said one of the most inspiring things they’ve experienced lately is running into fans at shows who are couples that came together after originally meeting at a Big G show.  Jeremy says that hearing stories like “We met at this show, and then we got engaged and now we’re married!” are really the most inspiring.

“I love meeting those people and just giving them a big hug, and being super-psyched for them.  It’s crazy that us playing music up there can be the cause of that.  Not thecau se, but help to assist in them finding each other.  That’s super inspiring.”

Jeremy had some great life advice on how he’s overcome any negativity or uncertainty that he’s encountered in life.  He really had no clue what he wanted to do when he came to Colorado, other than play music, and he was uncertain whom he would meet, but his positivity showed him the way.

“You can manifest your wildest dreams if you work your ass off and you also kind of, not only just work really hard, but work smart, and be open to things.  Things come to you in life that you’re subconsciously searching for.  Being aware of an opportunity or this thing or that thing, or even just making it happen…it’s possible, it happened for both of us.  Just being positive is huge when you get those hurdles and struggles, being able to cope with it, and get through it, and stay positive. Shitty stuff happens, but you get rewarded ten times more when you come back with a positive attitude and an open heart, and be the best version of yourself.”

How do two busy individuals such as Dom and Jeremy maintain any semblance of a personal life outside of music?  It’s not easy, but the guys credit their incredible friends, who always support them at their shows and occasionally meet up with them at the few shows Dom and Jeremy get a chance to check out as fans.  However, it’s right back to the music after that. The guys of Big G are highly dedicated to their craft.

Big G will be back home in Colorado when the fourth edition of Rowdytown returns to Red Rocks September 25th and 26th.  The guys will welcome some incredible guests including RL Grime, Thomas Jack, Snails, Jauz, and more.  It should be an epic weekend at an iconic venue.  They’ll be at KAABOO Festival in San Diego prior to their takeover of Red Rocks.  Immediately after that, the guys head to TomorrowWorld in Georgia.  That should make you “Get on Up.”