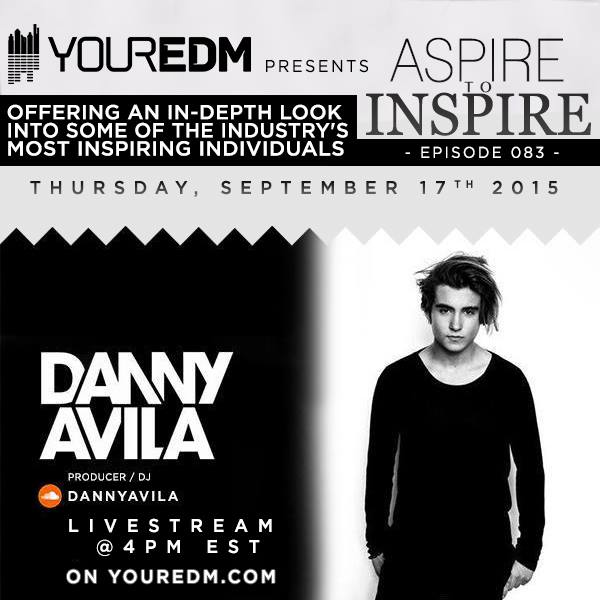 It takes a lot of strength, courage, ambition, and the right kind of sound to have success in the music world. Just think…it takes years for most DJs/producers to strike it big in this industry. For 20-year-old Danny Avila, however, his success has come a little quicker than most. Fortunately, he has had the perfect combination of support from veterans in the scene (who are now mentors), versatility in his productions and DJ sets, and a very successful radio show “Ready to Jump”. He may be young, but Danny is extremely dedicated and is ready to maintain his impact on the dance music community.

Danny Avila was destined for the life of a musician. He enjoys having fun, keeping an open-mind, and not taking life so seriously. He grew up in a small beach town in Marbella, Spain, and was raised playing the piano, violin, and guitar. Additionally, he was an avid wakeboarder. His entire life revolved around music and sports.

During Danny’s childhood, he spent his time listening to influential artists like Fedde le Grand, Mark Knight, and Funkagenda. After seeking inspiration from his favorite artists, he set out to learn how to DJ. So he browsed eBay, bought really simple CDJs, and watched tutorial after tutorial to excel at DJing. He eventually got invited to DJ his friends’ birthday parties and even won an award on a cruise ship at the mere age of 12.

When he was just 14 years old, he suffered a big injury and had to stop wakeboarding for six months. By the time he healed, he decided to pursue his more favorable passion and therefore, concentrated on making music. He admits to not really understanding what a DJ actually did to “kill it at a club” until he snuck into a Fedde le Grand show in 2009. Ever since that day, his perspective on life and how to be a good DJ completely changed. He moved to Madrid, Spain at 15 to do some soul-searching and to upstart his career as a DJ.

Setting out on the path to become successful in the music industry isn’t a life that most people choose and for good reason. Danny exclaims, “Of course the dream was always there to get bigger but I never really had the idea in my head that I wanted to become the #1 DJ… I just wanted to work as hard as possible.” As a lot of us know, obtaining success in this industry requires a lot of time spent inside with little-to-no social life. Naturally, his first year in Madrid was a trying one, as he would lock himself inside from time-to-time and would often get frustrated with his production skills.

Danny released his first few productions when he was just 16 years old. Ever since, he has collected a solid, supportive team to help take his career to another level. Success at a young age can be very exciting, but also daunting. Reminiscing to just a few years ago when he was 16 or 17, Danny explains that he was getting treated much differently. However, he believes that the standards and presumptions of age are changing.

His growth in age and maturity has also influenced his growth with music. Recently, his DJing style has been going through some significant, yet positive changes. He has realized the importance of taking individual audiences on a unique journey. Danny states, “I am trying to play a little bit differently. Not banger after banger. I like to go up and then down and then techy, to go on a journey.” As he has grown older and become more experienced, he has developed a complete understanding of music and what it takes to have longevity as an artist.

Danny enjoys taking fans’ advice and feedback into extreme consideration. “I really, really trust them [fans] and their feedback. They inspire me a lot because I value their opinion,” he states. Appreciating and listening to his fans has enabled him to endure the challenges of this industry and to continue on this musical journey. Even though it was difficult at times, he does not regret his decision to stay inside and work on music over having a social life. He is living the dream, and is completely happy and content that all his hard work has paid off and has had a greater purpose. Considering this prodigy is only 20 and killing it, this will not be the last time we hear or see the name Danny Avila.