This year’s Day Of The Dead festival might present some of the bigger set time conflicts that we’ve seen all year. The festival has been compacted and tightened to allow for a shorter duration – per the county’s new impositions – and that’s left some artists that we truly care about in conflicts. 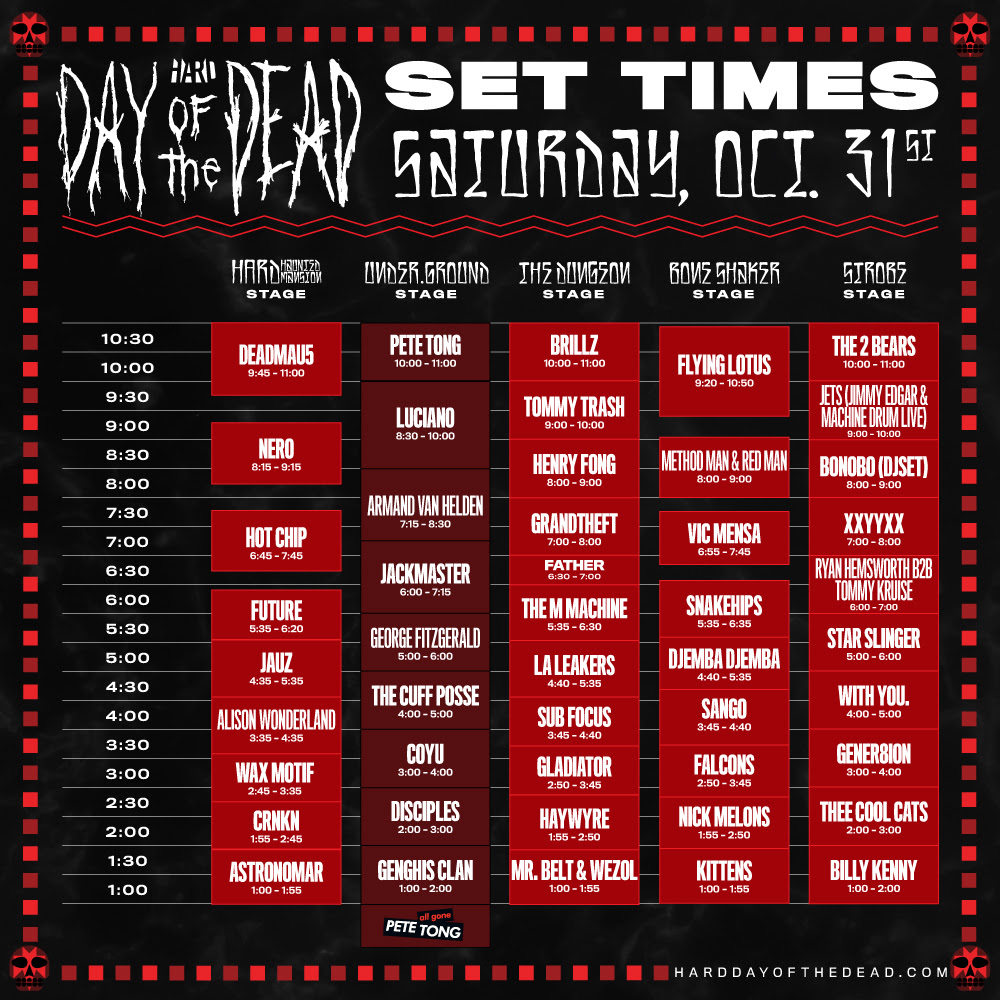 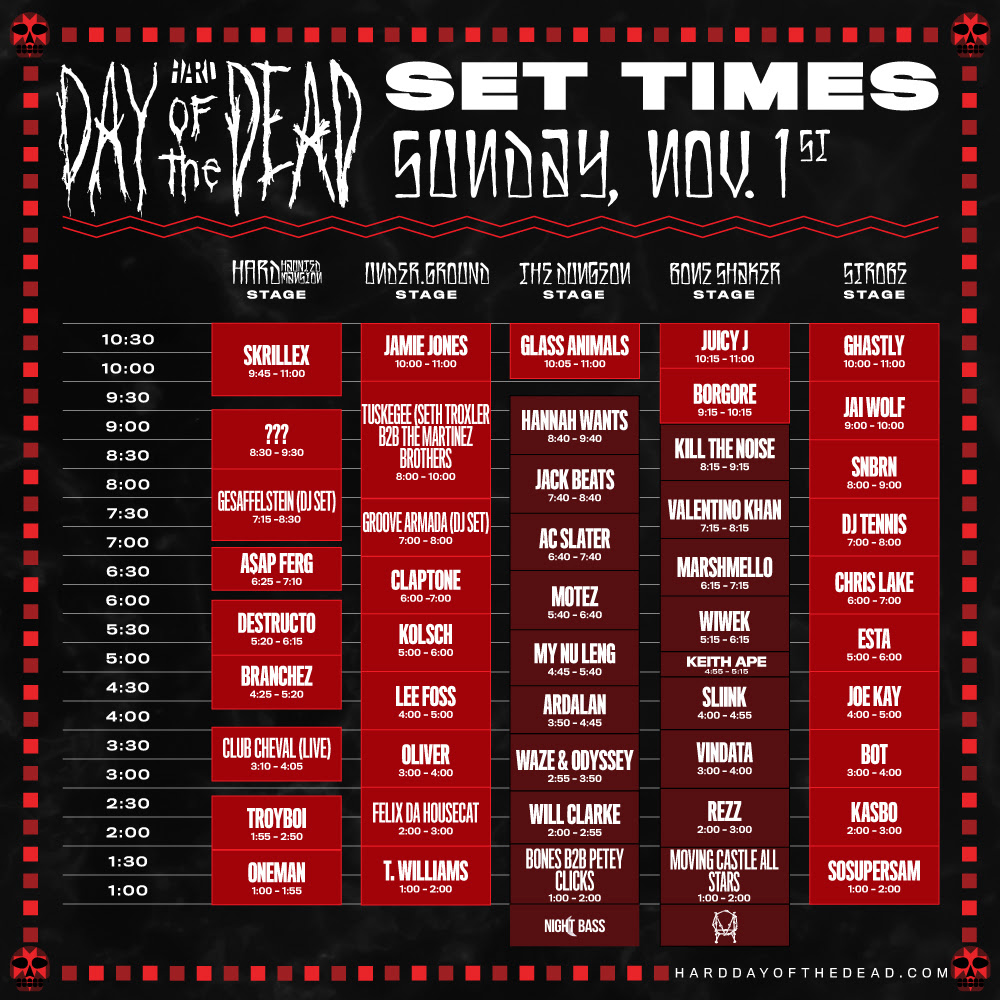 Let’s look at some of the biggest conflicts on the list, starting with Day 1. (Note: we won’t get to all of them.)

CRNKN’s set at HARD Summer was intense in the Purple Stage in the afternoon, heat filling the room and sweat beating down the backs of our necks. It was an awesome set, though even then, CRNKN conflicted with Dirtyphonics on the main stage.

This year, he’s up against Haywyre, the first artist to ever release an album through Monstercat and first-time HARD performer. His sensuous and sultry production should bode well for a festival crowd.

This one might be the hardest for me, personally. Alison Wonderland’s set at EDC Las Vegas this year almost left me in tears, but I’m a drum & bass fan at heart, and Sub Focus is a legend.

It’s especially disappointing that Sub Focus isn’t playing a bigger stage, considering his later set time and better stage when he played HARD Summer in 2014. His 3:45 set time is almost rude considering his tenure as a tastemaker and producer; however, his lack of new material this year has him below DJs like The M Machine, Tommy Trash, and Brillz who are later that night.

Both of these artists played the main stage at HARD Summer this year, and both played amazing sets. However, Jauz is only getting bigger and bigger, and will likely draw a bigger crowd. That isn’t to say that Djemba Djemba isn’t talented, because he absolutely is. Only if you would like a more intimate set with more shoulder room, I’d go with Djemba.

This is one of those conflicts where it’s completely up to personal preference. All of these DJ/producers are talented in their own right, and any of them would make for a fun set.

Deadmau5 vs Pete Tong vs Brillz vs Flying Lotus

Like… what? We’re supposed to choose? Good luck with this one, you’re on your own.

Troyboi vs Rezz vs Kasbo

Trap vs techno vs future. It’s a stylistic choice, but all are sure to be good times.

Troyboi has been on fire lately, and Rezz threw down an electrifying set at the Your EDM stage at TomorrowWorld on Sunday. I can honestly say I have no idea what a Kasbo festival set will be like, but that just only makes me more curious and eager to see him.

Oliver’s brand of stunning house versus Vindata, the new kids on the block at OWSLA. Again, both are sure to deliver stunning performances, and it all boils down to personal preference. My own vote will go toward Oliver – considering their numerous hit singles and incredible live presence, I’m very excited to catch them.

Good luck trying to catch all these sets at once, but you should. The A$AP crew has been a staple of HARD festivals for years now, and have always been welcomed with open arms. Claptone just released his debut album, which will be sure to influence his live set. Motez is another staple of HARD lineups, and has rarely disappointed.

Most will probably flock to Marshmello, the anonymous producer responsible for reigniting the anonymity craze in a post-Zhu era.

Still, Chris Lake is a contender in this epic festival-wide match up, and I hope that attendees are wise enough to give him a chance.

Gesaffelstein vs Jack Beats vs Valentino Khan/Kill The Noise

It’s hard to pass up a set from Gesaffelstein, especially on the main stage of HARD. However, with Jack Beats at The Dungeon and Kill The Noise following Valentino Khan on the OWSLA stage, this decision got a whole lot harder.

However, the still-unnamed mystery DJ following Gesaffelstein might be enough of a draw to get people to catch the end of the French DJ’s set. If you’re not interested in seeing who it is, it might be best to catch the first half of Gesaffelstein and then mosey on to wherever you want to be next.

Skrillex vs Glass Animals vs Ghastly

Who would have thought that in his debut HARD appearance, Ghastly would be closing out a stage? For the Arizona native, this is a huge moment, and I’m 100% positive that he’ll be bringing out friends like Dr. Fresch or Jauz to go B2B toward the end.

Skrillex is an obvious contender, situated on the main stage as always. Without his counterpart Diplo, with whom he’s played as Jack U at HARD Summer 2014 and HARD Summer 2015, I’m interested to see what he can throw out. If it’s anything like his DOTD 2013 set, you don’t want to miss out.

Glass Animals is DOTD’s answer to Summer’s Ratatat. The off-kilter and EDM-adjacent band plays an incredible diverse and wonderful set, and if you’re looking to wind down and avoid the bros at the main stage, then this is your best bet.

HARD Day of the Dead is STILL SELLING TICKETS and will take place October 31 – November 1 at the Pomona Fairplex.