Dubstep never died. And as Caspa said in my interview with him and Rusko, music works in cycles.

“When you say a genre has burst, that doesn’t mean it’s gone. Maybe trap comes in, or deep house comes in. Then that gets boring. Then drum n bass comes back,” he said. “Genres need time to breathe,” said Rusko.

Well, these two have given fans eight years of breathing room since their seminal mixtape Fabriclive 37, which some might argue made dubstep what it is today. Beyond the mix itself, tracks like “Jahova,” “Africa VIP,” “Mr Chips,” and “Cockney Thug” became anthems in the dubstep community because of these two artists.

Caspa & Rusko are also sometimes referred to as the progenitors of the brostep style (as much as you like to think it’s Skrillex, he only brought it to the mainstream). For a variety of reasons, including its funny name and harsh synthetic samples and sounds, dubstep has been the butt of jokes inside and outside the electronic music community for the past five years, at least. Yet ask any dubstep fan that has been a part of the community for more than a day, and he might tell you about the vast history of the genre, even within its short 10 year existence.

Caspa & Rusko exist in that history as figureheads and tastemakers. They came in at a time when dubstep didn’t quite know what it was, and created a spark that turned into a brush fire.

In the eight years since Fabriclive 37, Rusko has released two albums, five EPs, and multiple singles, and has collaborated with Cypress Hill. Caspa has released three albums and various other works, as well as heading his label Dub Police. In that time, the two rarely had a chance to interact outside of Twitter and online. However, recently, in just the past year, Rusko went back to the UK to visit family and, somehow, ended up in the studio with Caspa. What began as just seeing if they could make a track together ended up with an album’s worth of material and a desire to play it out. 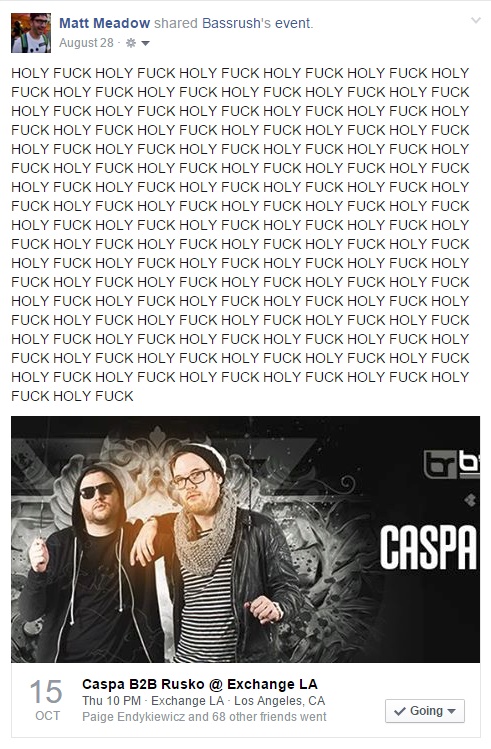 News of their first ever billed B2B show first surfaced on August 28th. I remember the date because I made a big fucking deal about.

Honestly, as a dubstep fan, I felt that it had the potential to be one of the biggest moments in dubstep, or at least in my own life as a fan.

Their SOLD OUT show at Exchange LA last Thursday was mind-bending. As they told me the night before, they played out most of their new material – even though no one really knew it. Even better, they played a lot of their classics including “Woo Boost” and Caspa’s remix of “Where’s My Money,” which he spun back, played Rihanna’s “BBHMM” and dropped it back into “Where’s My Money.” Rusko played his original “Everyday,” dropped it into the Netsky VIP, and then played the original Netsky remix. Caspa played his “I Remember” remix, for fuck’s sake.

Point is, it was a night to remember.

The day before they played, I was able to interview them both at Rusko’s home in Los Angeles.

So UKF’s first question to you was “Why now.” I want to ask you, why here? Why Los Angeles? Why not the UK?

Caspa: It’s not like we wanted to do it in Los Angeles…
Rusko: We only wanted to do one, that’s the first thing. But LA has been special for both of us.
Caspa: LA pushed us really hard in the beginning. Because it’s always been, if you smash it in LA, it makes waves. It makes a difference. But this show could have been in Denver, it could have been in London. It just so happened we talked to someone who got it, and pushed it, and that was Tony from Bassrush. There was no conscious decision… it just happened that way.
Rusko: The idea was to do one big show, then follow it up with all the music we’ve got ready. I think we’ve got 10 tracks ready. This show was a statement: We’re back.

It’s a great time, in the scope of dubstep, as far as where the genre is at right now. It’s a bit more mature.

Rusko: We could have done this years ago still, and it could have made somewhat of an impact. When we first did the Fabric mix, in dance music as a whole, there was a gap. And we saw that gap and we took it and went for it. And since then, it’s been full. Full. Full. Full. Full. Full. There’s been more than enough. And now, that gap is coming back… the time is right.
Caspa: And the UK sound of dubstep has been very American dominated the last few years. That UK sound has gone away a bit – it’s there. But…

Caspa: Right, and we’re looking to bring that flavor back in our own way. We’re approaching it the same was as before – go into the studio and have fun.

You’ve both released a lot of music in the time that you’ve been apart. Rusko, your last set of EPs, ! Pt. 1 and 2, were really experimental.

Rusko: Yeah, totally. Every track was a different tempo, that was the whole idea. And none of them were dubstep.

So that was mostly to clear your head…

Have any of your projects influenced what you’re doing currently?

Caspa: I think when we come together, we have a very particular sound. Rusko is very musical; I’m very dark, technical. So when we come together, we’ve got a very fun… it’s not too serious, not too easy, just really nice. And we’ve had 7 years off to perfect our styles.
Rusko: But we’ve been using a lot of the same sounds – synths, drum kits – but we’re processing them in a new way.

In terms of other influences, I’m paying attention to artists like Joker, Swindle from the UK. Do you feel an influence from artists creeping in?

Caspa: Any artist that says they weren’t influenced by another artist is lying. It’s good to keep in touch with what’s going on around you.
Rusko: There’s some UK grime right now that I’m really feeling. Some guy named J Beatz, and Dullah Beatz, as well. Grime, in the vocal world, is really huge in the UK right now. It’s always been big, but it’s emerging even more right now.

A lot of people in LA recognize it and want grime to come through.

Rusko: As far as influences, grime has been a big one. A lot of drum n’ bass and jungle too, a lot of ’90s music honestly. Our old tracks that we’ve done together were influenced by jungle and garage, years before dubstep came along.

Your last track, the Ivy Levan remix, that was drum n’ bass.

Rusko: Yeah, that was the only thing I’ve released in … about a year.

So that was something to keep people busy while you had all this going?

Rusko: Yeah yeah, basically. The Caspa & Rusko stuff has been my main focus recently. And it’s all pretty much in the 140.

With SFX nearing bankruptcy, a lot of people are talking about a “bubble burst.” Somehow, that has expanded beyond the industry and into discussions of genres. “Dubstep is dead” is another common phrase, but obviously, the two of you are bringing it back.

Caspa: You were opening every magazine and seeing “dubstep remix of this” or “dubstep remix of that.” Dubstep. Dubstep. Dubstep. It was too much. For fuck’s sake, shut the fuck up with dubstep. It gets on your nerves. Sometimes you need to go, “Oh yeah, dubstep, I’m a fan of that.” And then something happens… Caspa & Rusko release a tune, and we sell out Exchange, “Oh fuck, I forgot how strong it actually was.” That’s what we did the last time around, we did the same thing. It’s bumbling on for a long time then we come through and explode it.
Rusko: That was the gap I’m talking about. The gap was closed for so long, everything was so jampacked – there’s a gap again. People are ready for it.
Caspa: We’re bringing the UK sound. It’s not the American sound.

It’s exciting. Do you guys have a plan in mind for how you’re going to come back?

Caspa: Well we haven’t really gone anywhere, that’s the thing.
Rusko: We could literally, right now, release an album and do a tour. But we’re going to do one show. And one track. And follow it up with a few more tracks.
Caspa: We’re totally independent, we’re going to do it how we want to do it. We don’t have to conform to anything.

This is your first billed back to back set.

Caspa: Yeah. We did a small show in San Francisco back in 2007, but we’ve never done a proper show in the US. That was more of a freestyle.
Rusko: We could sell out a club, and play a bunch of our old classics back to back, but it wouldn’t feel nearly as satisfying as following that up with new music.

Dirtyphonics Celebrate Back to the Future Day With “Hoverboard” [Free Download]

Dirtyphonics Celebrate Back to the Future Day With "Hoverboard" [Free Download]