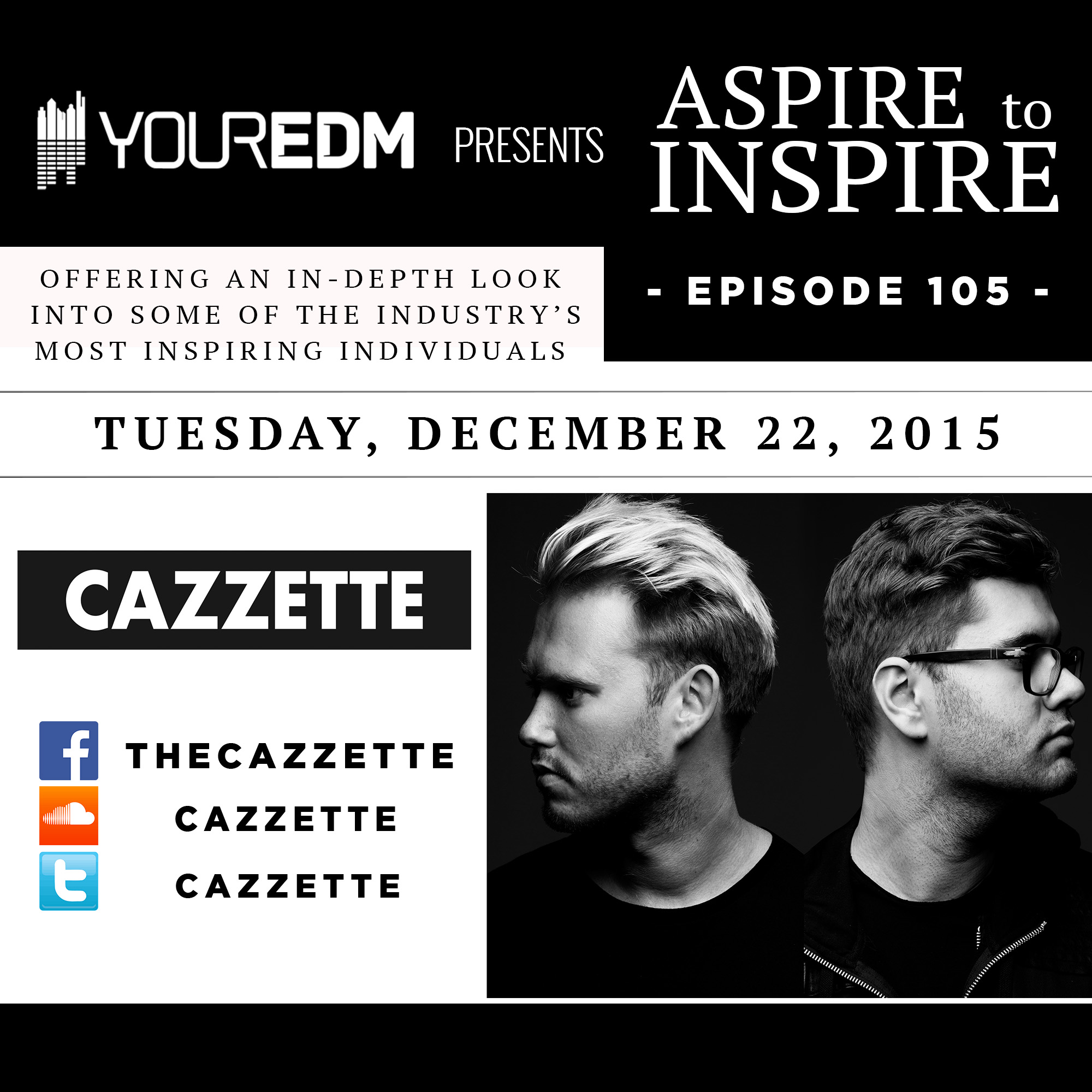 One of the most difficult obstacles an artist can face is to navigate between the demands of their fans and their own creativity. On this episode of Aspire to Inspire, Sebastian Furrer and Alexander Björklund of the Swedish Duo Cazzette, tell us exactly how much that can weigh on an artist’s career.

Neither Alexander nor Sebastian had their sights set on the music world when they were kids, but once they grew into their teen years, things began to change. Around the age of fifteen, Alexander started to develop a more serious interest for music; as he started to make more and more choices in his life that gravitated toward the music world, the idea of becoming an artist flourished.

Sebastian on the other hand, was focused more on the idea of a career that let him work on his own and without a boss. The ability to control his creative freedom was of the utmost importance. After a brief period of wanting to become a chef and own a restaurant, he shifted his path towards the music industry at the age of eighteen.

Thankfully, their parents were supportive of their dreams:

Alexander: “When we first started touring, I was actually living at home and my mom basically said to me, “Okay you’re touring now…you need to move out.” That was totally fair, though because they were just very nice and supportive throughout the whole thing. They let me live with them for a while. I’m a little bit older than Sebastian.”

Growing up and starting their careers in Stockholm, Sweden, there was not nearly as high of a concentration of artists as many may think. There were of course the bigger names coming from Sweden such as Swedish House Mafia and Avicii, but there weren’t many other DJs or producers at the time. While some may see that as a disadvantage in the sense that there were not a great deal of nearby influences, Alexander and Sebastian still saw their position as a positive one.

Alexander: “Despite having artists like Swedish House Mafia and Avicii, when we started out Stockholm wasn’t really that saturated of a market. Not that many people were DJing or producing at the time. The few people who were doing it, were doing it very well. The good thing is that Sweden is such a small country so it made me feel like…if they can do it, I can do it too because they didn’t live too far away from me. I knew that I had to put myself out there and start meeting people.”

The Swedish duo takes even the hardships that go hand in hand with working as a group with stride. The creativity of one person does not always mean that the other half of the operation will be on board with it. Alexander and Sebastian know this well and embrace it as part of the process. Having an open mind for each other’s opinions and understanding their chemistry allows them to work together so well.

Sebastian: “What is the point of having a duo if you can’t fight about something, you know? That’s just how partnerships work. If both of us were mellow, then it wouldn’t be that exciting. Usually we do agree on most things, but if we don’t…that’s fine too. I think at the end of the day it’s just about coming together with both of our opinions and making the best out of it.”

Keeping the balance between the happiness of their fans and the happiness of their craft, however, is not necessarily as smooth of a process. The two realize that as much as the fans loving their music is a wonderful feeling and that it hurts when they don’t, they are truly making music from their own hearts rather than catering to a demand. After all, it’s their music.

Sebastian: “At the end of the day, the most important thing is that we’re happy with our productions. If 30% of our fans love it and 70% hate it, then we should focus on the 30% who love it and believe in it. Of course it’s important to listen to feedback on our productions, especially with management, but other than that…if we like it then we go for it. It’s our lives. If people love our music then they can join us on this journey! Music would honestly be so much better if everyone just created songs for themselves, instead of for other people. Then that good, authentic music catches on and goes viral because people can relate to the emotion of that song.”

As artists often do, Alexander and Sebastian went through a period of struggle that they refer to as their “identity crisis.” Cazzette’s popularity grew at a rapid pace before hitting somewhat of a lull. As two young artists that did not necessarily know everything there is to know about the business of the music industry, it was certainly a stressful time that proposed a lot of questions for them. Looking back, however, Alexander sees the lull in their career as a necessary evil. Having learned so much from it, the two were able to get back on their feet and create the music that really meant something to them.

Sebastian: “You know how individuals mature so much between the ages of 18-35 or so? Well, I feel like that’s what happened for us in just three years. It was honestly so fast that we had to figure everything out. I used to just be a kid making music in school for fun, and then all of a sudden…I’m touring all over the world. We had to go from being teenagers to adults very quickly. We had to setup a company, hire lawyers, tour all over the world, learn new languages, etc. It was definitely a personal identity crisis for us as well. We didn’t really have time to think about what exactly we wanted. It was just very overwhelming. We eventually just took some down time to think about our identities and figured everything out.

Sebastian: “The people around us inspire us too like family, friends, people we’re working with in the studio, etc. If they bring out that fire in you, which you know you have somewhere deep inside of you, then it’s really powerful. You don’t just automatically have inspiration within you…there are people around us who fuel our inspiration and energy. We have to do the same for others.”

Having spent a total of 320 days traveling alone in roughly a year long period from half of 2012 to half of 2013, Alexander and Sebastian realized just how important it is to take a step back from time to time and think about the path in front of them and what they actually want to do. Whether they have moments of doubt in their career choice, stress from travel, or even creative differences, the good moments always bring them back to why they chose this career in the first place.