Miami Music Week is known for two things: 1) its unpredictability, and 2) its incredible music. Okay so there are probably more than just those two things but we’re gonna focus on these two just for now.

The amount of parties during this week-long period is quite simply staggering – we released a list of 123 parties at the beginning of the week, and the next day we had about 20 more (a phase two is coming). One of those parties is the Proximity x electroNOW (Spotify) collaboration, PLAYLiST MiAMi, Friday March 18 at the National Hotel.

Already announced are Audien, Destructo, Ephwurd, Ghastly, Hellberg, mugLiFE, Paris Blohm, Pierce Fulton, Tritonal, Vicetone, and ATTLAS b2b special gue5t, that we’ve already confirmed will be deadmau5 based on his bus tour “special gue5t.” All of these artists will be playing special back-to-back sets, and there are actually still plenty more secret guests to announce. This goes a long way to making it one of the most special parties during Ultra week and far beyond. Even better, the performances will be live streamed!

There are also four other secret performers, which you might be able to guess from the set list we found… But first, get your tickets here! 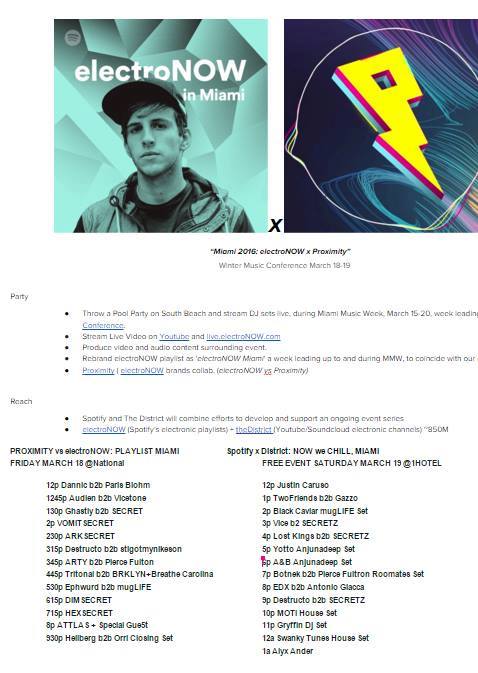 As you can see, plenty of b2b sets – but we want to direct your attention specifically to VOMITSECRET, ARKSECRET, DIMSECRET, and HEXSECRET. Some may be more obvious than others, but all are worthy and highly anticipated headliners.

As a hint to help you figure out who exactly these artists might be, we put together a little sampling of some music you might hear at the show. Enjoy!

Shaq Is Back With A Spin On His First Original Tune

DVNGLEz – Roll Up [Your EDM Records]

DVNGLEz - Roll Up [Your EDM Records]