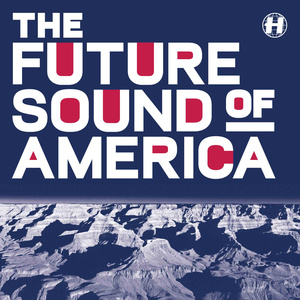 Back again with yet another timeless piece is one of America’s finest duos in collaboration with the brilliant Kid Hops, Quadrant + Iris. Stemmed from Hospital Record’s newest release entitled: Future Sounds Of America, the team presents an exclusive EP pioneered from American producers right here at home. It seems as though only yesterday we all shared witness to the complex beauty that was the 206 LP, an album of pure diverse bliss through Commercial Suicide. Now, they’ve returned with their track “Get It Back” featuring the exceptional vocals of Shaprece. In celebration, they’ve released a visual materialization of the tune- and we at Your EDM have had the opportunity to get a few words from the three themselves!

Hey all! Stoked to be having a chat with you all.How exciting is it to be apart of the revamp of one of the most respected Hospital series’s ever- but with an American touch?

Iris: Very exciting! We’re thrilled to even have been considered for this opportunity. Moreover it’s great to see a label as established and legendary as Hospital take a big interest in what the US has to offer right now. Through the events they’ve already thrown around the country right down to this forthcoming release.

Kid Hops: It’s incredibly exciting to be involved! The “Future Sound of…” series has played a pivotal role in bringing exciting talent and ideas to the world, and has always meant a lot to me personally. I still regularly turn to tunes from earlier editions, like Logistics’ “Together,” Commix’s “Bear Music” and “Rack It,” and Subwave’s “Stars Get Down” for inspiration while deejaying or in the studio.

Quadrant: It’s an honor to be involved in this project, not just because it’s a Hospital release and a continuation of a venerable series, but we’re also in the company of some amazingly talented artists.

Tell us a bit about the song you’ve got on the compilation, and what went into creating such an exceptional song with such a vibe to it.

Iris: This was a song we’d started awhile ago, but really only had about a minute of. We knew we had a special tune and were kind of waiting for the right moment to finally get around to finishing it. When Hospital approached us with their FSOA EP we knew it would be a perfect fit.

Kid Hops: Firstly, I’m thrilled you like the tune. Thanks for your kind words – I am happy you’re feelin’ it!

“Get It Back” was written specifically for Future Sound of America.

The song features Iris, Quadrant, and me – with our dear friend, and fellow Seattleite, Shaprece on vocals.
I first met Shaprece in 2010, when we performed on a bill together with Sir Mix-a-Lot.

She stunned me with her vocal performance, and that night we swore to get into the studio together. It took over 5 years to coordinate our schedules, but I’m thrilled it worked out! “Get It Back” is the fruit of that effort.

It was a joy working with Shaprece in the vocal sessions, and Iris and Quadrant and I had a blast working together on this tune.

I am happy the fun we had together comes through in the production.

Quadrant: One cool aspect of working with Shaprece – she’s *really* into doing tons of alternate takes, lines, and harmonies, so we had dozens of takes, ad libs, etc to work with. It was kind of daunting sifting through all the raw material and putting into place in the finished product, but I think it made a huge difference to the progression and vibe of the track.

After the massive success of your debut album “206” in which Kid Hops also played a role in, what’s next, and can hospital fans look forward to hearing more from you guys in the future?

Kid Hops: We have exciting new releases in the pipeline – but we cannot share details quite yet. With regards to future releases on Hospital – it’s always a joy to work with the Hospital team, and we’re always humbled when they show interest in our music!

Iris: Yes, for sure! We’ve actually been a little slow in the studio lately due to other works obligations, but we’re expecting that to change soon! There are quite a few tunes in the pipeline to be finished right now and many more to start.

Quadrant: I have a project with NC-17 forthcoming on Dispatch, but other than that we’re just trying to keep our heads down and make music we like.

How do you feel about the current state of drum and bass in America?

Iris: It’s a great time for DnB in the States right now. There’s so much diversity in the sound and events. It’s being featured at some of the biggest festivals in the US, both Hospital and Ram are putting up large scale tours for their artists, plus there’s a great market for smaller and more intimate events as well across the country. In our home town of Seattle alone we not only have a great set of local DJs, producers and club nights but we consistently have out of town talent coming through to play for us.

Kid Hops: The current state of D&B in the US is great! The sound is more diverse than it’s ever been, and there’s loads of talented and inspired DJs and producers. It’s a great time for D&B in the US, and all throughout North and South America.

Who are some of your inspirations when you jump into the studio?

Iris: I think we pull from a lot of different areas. We all listen to a variety of music styles and definitely not exclusively dnb. One of my favorite things is listening to what other musicians outside of dnb do and using that in our own work. Additionally, both Quadrant and I are classically trained musicians, so that’s always been a huge influence on us as well.

Kid Hops: I have a voracious appetite for music, across all styles. The styles that originally influenced jungle and drum & bass – reggae, dub, hip hop, jazz, house, Detroit techno – still heavily inspire me when I step into the studio today.

I love that drum & bass is always greater than the sum of its parts, and I love that it’s always evolving. I love this!!!

There are so many producers innovating right now. It’s an incredibly fertile, open-minded, and creative time in Drum & Bass. It’s very exciting – and very inspiring!

Quadrant: Inspiration in the studio is a weird thing. As the others mentioned, we all have pretty diverse musical tastes (especially Kyle) but when it comes down to starting an idea or staying engaged with what you’re working on, oftentimes it’s something small like a bass stab or a random musical sample that sparks an idea, and those moments build on each other until you’ve got the beginnings of a song. I got into Drum and Bass in the late 90s and early 2000s, so I’m still heavily influenced by the artists and motifs from that era… Fierce, Matrix, C4C, Klute, Konflict, etc. That’s still the blueprint that informs a lot of what I do, but through our collaborations other influences also bend things in one direction or another.

Lastly, anything else you’d like to add to the fans at Your EDM?

Iris: HUGE thank you to everyone who’s been buying our music and supporting us on this journey! It definitely wouldn’t be possible without you all!

Kid Hops: From the rainy northwest corner of the US, I’m sending big love & thanks to everyone worldwide for listening and dancing. Thank you!!!

Quadrant: Massive thanks for all the support, and buy copies of our records for all your friends!

Although I am a bit bias, it’s extremely inspiring to see Hospital Records giving American artists as talented as these the opportunity to grow and work with such an esteemed label. With the massive parties the crew is throwing stateside, along with releases like the aforementioned, who knows what will be in store for us in 2016.

You can purchase the release here: https://HospitalRecords.lnk.to/FSOApr