It’s official, Smirnoff‘s dedicated electronic music Sound Collective will be touching down in South Beach during the upcoming Miami Music Week for a free four-day, musical exploration through the inclusive power of the community. Coming as the their premiere U.S. launch, the collective will take over the The Gale Hotel alongside an extensive and diverse host of musical acts from all corners of the dance music spectrum from March 16 to 19. In a lineup released this week, the daytime and night schedules for each day divide the contributing artists between the hotel’s rooftop pool area and the nightclub.

Gorgon City, Kidnap Kid, Redlight and Justin Jay will kick things off Wednesday, March 16 with sets that span from 11 p.m. to 5 a.m. the following morning. The next day at The Pool, Zeds Dead, Destructo, Hunter Siegel and more will play until 7 p.m., when the party will return to the Nightclub to feature acts like Claptone and Tiga B2B Kenny Glasgow. March 18, Anna Lunoe, Boyz Noize B2B Totally Enormous Extinct Dinosaurs, What So Not, Sleepy Tom and more will begin the day upstairs, with MK, Sonny Fodera and Jonas Rathsman finishing below. Finally, Tokimonsta will play alongside the Discwoman crew and many others before Dirtybird hosts Justin Martin and friends on the Nightclub stage.

For partygoers 21 and up, free Smirnoff mixed drinks will be provided throughout the four days. For those who aren’t able to make it to The Gale, partner Mixmag will be livestreaming select performances via their Youtube channel.

So, whether you’ll be experiencing the festivities in Miami or sitting on your couch in sweatpants, make sure to check out Smirnoff Sound Collective’s takeover for one of the most diverse and inclusive line ups of the week! 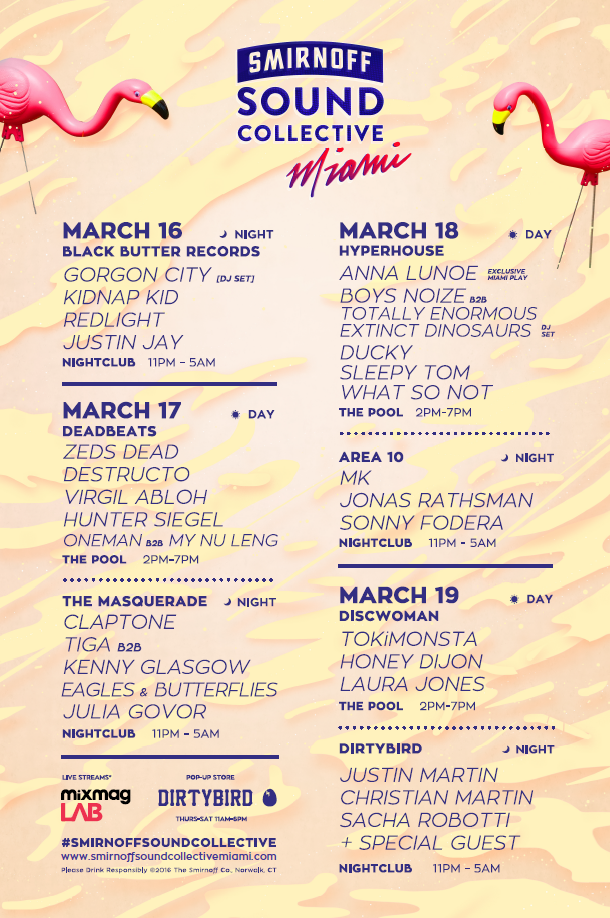