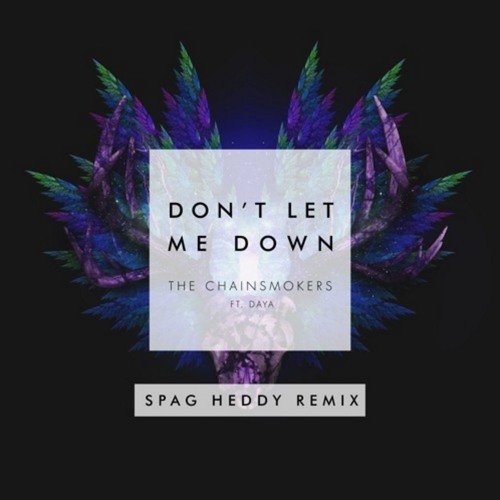 I’m sure dubstep was the last thing on your mind when you first heard The Chainsmokers’ most recent hit – “Don’t Let Me Down.” The instant classic has understandably incurred a slew of remixes, but the latest wub-laden masterwork from Spag Heddy could easily be my favorite.

The track opens with a bouncy percussion line that’s densely populated with gated claps and a punchy sub-bass. In comes everyone’s new favorite vocals, and the melody begins to seriously pick up in the vibe department. A filter sweep signals a sudden cutout of the drums, and a gradually unmuffling organ prepares you for the momentous build that’s about to come. Right on cue, the claps make a triumphant return, neatly layered over a group of tightly compressed snares. Daya calls out one last time to save her, and you are thrust into a world which probably never crossed your mind when you thought of The Chainsmokers.

To be completely honest, the drop is one of the heaviest I’ve heard in recent memory. It sounds like the lovechild of Virtual Riot and Barely Alive, with a little hint of Skrillex sprinkled over the secondary synths. The wubby screeches utterly floored me, and I’m pleasantly surprised such an intense drop could work with such mellow vocals. Check out the track below, and be sure to catch Spag on his current North American tour!