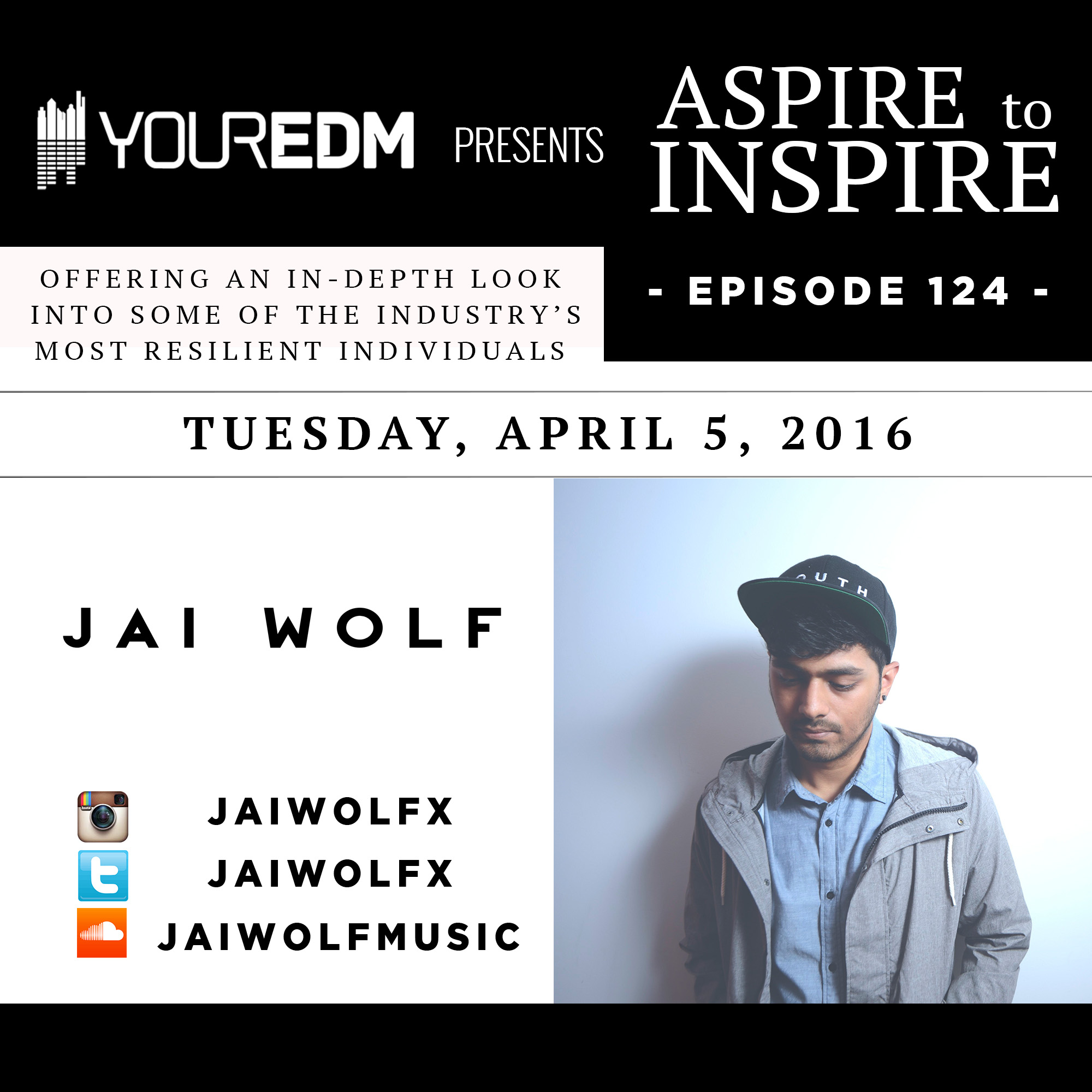 As electronic music evolves, new genres form, and new artists step into the spotlight; we hear all sorts of sounds that move us in so many different ways. For Sajeeb Saha, otherwise known as Jai Wolf, a career in music means sifting through as many sounds as one possibly can to mold his own style, leaving no stone unturned.

While many of the artists and individuals we have featured on the Aspire to Inspire series found their way into music after experimenting with other interests, Sajeeb has been involved in music his entire life.

“I actually grew up playing the violin— since I was five. I had a lot of solo performances on the violin and then also was in orchestra from elementary school to high school. I was really serious about it too. In high school I was an all-state violinist in New York and it was cool because my parents, although they put a lot of emphasis on math and science and education, they allowed me to be really creative artistically. My mom would always take me to violin lessons and let that side of me really flourish. There was a time when I thought that I would be doing that for the rest of my life – being in a professional orchestra or becoming a violin teacher. My music teachers inspired me. I was really into classical music growing up. I was always comfortable playing on stages too. I loved it, even as a child.”

It wasn’t until Sajeeb got older, however, that he started to familiarize himself with the electronic side of the music world. In high school Sajeeb was a huge fan of pop punk bands such as Blink 182, Green Day, and most of all Fall Out Boy. The more he felt the presence of electronica on albums like Kanye West’s 808s & Heartbreaks and Kid Cudi’s Man on the Moon, the more he was influenced to start taking his own abilities to the next level.

“When EDM started getting big in the States in 2010 I rejected it at first. I wasn’t really into house music. I liked dubstep a lot, though. It influenced my productions – I started making a lot of dubstep-oriented music between 2010 and 2013. That was the sound I was into for a while and then Jai Wolf came about two years ago when I realized that I didn’t really want to be boxed into the dubstep genre anymore. I stepped back and reevaluated what music meant to me and where I wanted to go from there. I knew that I didn’t want to be in a box for the next ten years. Jai Wolf was birthed through that idea of ‘what do I want to do’ and ‘what does music really mean to me.’ I realized that I wanted to go back to my roots, to what I really enjoy – Indie-electronic type music. This was happening when future bass was getting really big. I think artists like Lido, Waveracer, Cashmere Cat, and Flume — I’d say the four of them were pushing the sound. I started to see myself moving in that direction. From there the sound just evolved over the last two years until I found a place where I felt comfortable…that wasn’t necessarily mimicking other artists but occupying my own space. It was definitely a growth period for me from 2014 to 2016.”

There are many of us that know and love Jai Wolf’s breakthrough track “Indian Summer”, but it was actually his “Dollhouse” remix that made him realize he was exactly where he was supposed to be. After testing the waters of dubstep and heavy trap, Sajeeb began playing around with sounds that made him the happiest. A remix of Melanie Martinez’s “Dollhouse” was the result, followed by remixes of Odesza, Dirty South, and more. Feedback from fans was overwhelming. From then on the Jai Wolf sound began to shape itself into what we hear now in tracks like “Indian Summer”.

Getting to that point was no easy feat for Sajeeb. There were other less successful projects he pursued before Jai Wolf took off, which can easily discourage an artist.

“You shouldn’t have any sort of expectations if you’re making music. When I was really young it was so easy to get so excited seeing my heroes and think, oh I want to do that. I’ve been writing music for seven years. Jai Wolf is my fourth project, and it wasn’t until a year or two into Jai Wolf that things were really picking up. I think patience is something that takes a long time to learn and I’m still learning it today. I’m still thinking about what I’m going to be doing six months from now or a year from now, but I have to just take it day by day.

It’s a really big ladder to climb. I think for young producers, especially, it’s a journey but it is such a rewarding one if you continue on with it. I’ve seen so many people only try it out and then give up or they think it’s too hard and decide not to take the risk of climbing farther. It’s also true that the higher you climb the farther the fall. What I’ve learned is that if you keep going and keep putting in the time and the energy to really work on yourself artistically, it’s totally possible to get where you want to be. Just know that for different people it might be coming at different times. Just because your buddy is popping up faster than you are doesn’t mean that you should compare yourself to him/her. Don’t compare your journey with someone else. Everyone’s journey is different.”

Aside from the personal reward in creating something of your own and building a new sound, the connection Sajeeb has with his fans is on a level that not many are able to attain. There are so many different sounds within the electronic music industry that fit countless occasions, but Jai Wolf has brought an entirely new emotional experience to the table.

“It’s cool when I hear someone say that a song really resonates with them and makes them cry or if they come to a show and they’re in tears; that to me is really special. It just really shows how music can impact people and it’s really crazy to think that something I have personally written can affect someone like that. I’ve grown up listening to other people’s music and it has affected me, but to be on the other side of it and have the power to do it for others is really cool. I’m really lucky that I get to call this my career and do this every day.”

Sajeeb has been able to gather inspiration for his creations from a number of figures outside of music as well. With his family having come to the United States from Bangladesh, it was tough to see his race as well as other Indian cultures portrayed through certain stereotypes in the media. It was nice to finally see those stereotypes diminish when actors like Aziz Ansari on “Parks and Recreation” and Mindy Kaling on “The Office” started gaining notoriety. Being able to witness that shift in the entertainment industry has inspired Sajeeb to push it even further into the electronic music community.

“I think I could use my role in the music industry to inspire people out there of my own race to know that they don’t have to be doctors, engineers, or lawyers. I would love that. If they really want, they can have a career in entertainment. Music is so important because it’s a way of expressing yourself. You can express yourself without using words and it’s so cool. I’d love to be what Aziz Ansari was for me, for other people, so they know that it is totally possible.”