Chicago’s premier beachfront music and arts festival will be returning to Oakwood Beach this Fourth of July weekend for the event’s second annual installment of incredible indie and dance music acts. Last year, the festival saw unforgettable performances from Cashmere Cat, ZHU, Empire of the Sun, Passion Pit, Phantogram, Autograf and more on the sand-swept beaches of Lake Michigan. This time, the experience curated by React Presents looks to be an even more enticing and memorable one.

In an announcement released this morning, the first phase of Mamby’s 2016 line up was revealed. Headlining the festivities will be Australia’s Chet Faker alongside Milky Chance and Atmosphere. Chromeo, Animal Collective, Lupe Fiasco and Santigold will also be taking to the stage, while an entirely separate DJ Tent will house a diverse and interesting array of electronic acts.

Kaytranada, Lido, Gallant, Thomas Jack, Ryan Hemsworth and the city’s own Monte Booker will also be in attendance, bringing soulful and unique dance elements to the main stage.

Meanwhile, in the DJ Tent, artists Seth Troxler, Loco Dice, Black Coffee, Hannah Wants, The Black Madonna and many more will maintain the more upbeat side to the proceedings.

In addition to the long list of musical acts, Mamby on the Beach will be hosting a wide variety of art installations and activities for fans to enjoy between their favorite sets. Silent disco yoga, VIP lake access, a new and improved tiki bar, henna tattoos and a “living” installation will all be available to attendees.

In another exciting move this year, the festival will be also be converting its third area from its 2015 role as a local platform into a full-fledged stage. The Park Stage will now be located just south of the main beach in one of the city’s sprawling lakefront parks.

Check out the first phase of Mamby’s 2016 line up below, and click here to access general admission and VIP ticketing options. 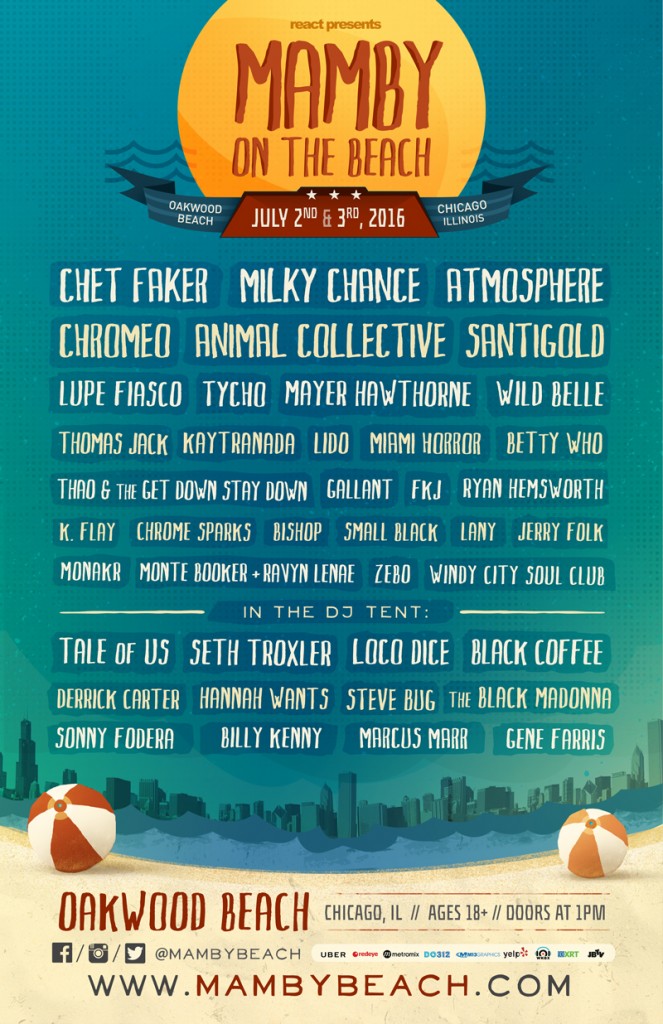