by Cody Smith
in Editorial, Events

Much like any other great music festival, the Movement Electronic Music Festival comes attached with a heap of after parties, pre-parties, and other connected events. This year, the party options are near endless, but Your EDM has helped nail down 14 essential events that we think are the best parties to check out during the weekend. From Friday, May 27 to Monday, May 30, these parties will be occurring at all the best Detroit clubs and venues. With some being promoted by Movement promoter Paxahau and others more grassroots in scope, the options are plenty. View our picks for our best parties of Movement weekend below: 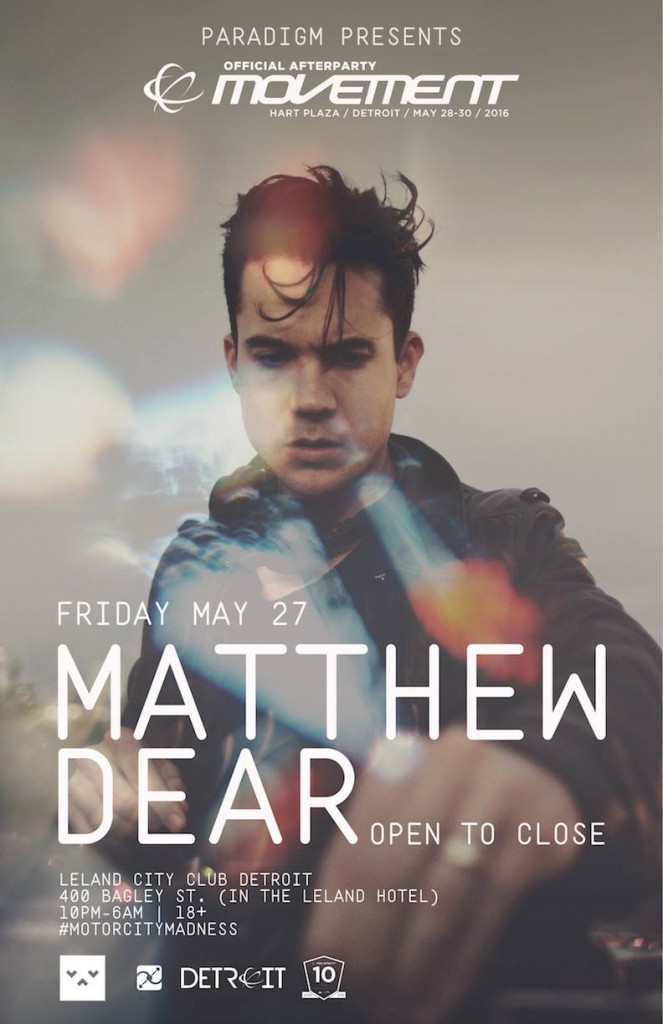 Only announced recently, this party at Leland City Club being put on by Chicago-based promoter Paradigm Events will serve as the perfect opening to the weekend. Headlining the event is Matthew Dear, honoring his hometown by playing a staggering open to close set set that runs nine hours. The combination of promoter, venue, and artist really suggests this event will be the perfect Movement opening party to attend. Tickets are currently $15 at Ticketfly, and the event runs from 10 p.m. to 6 a.m. 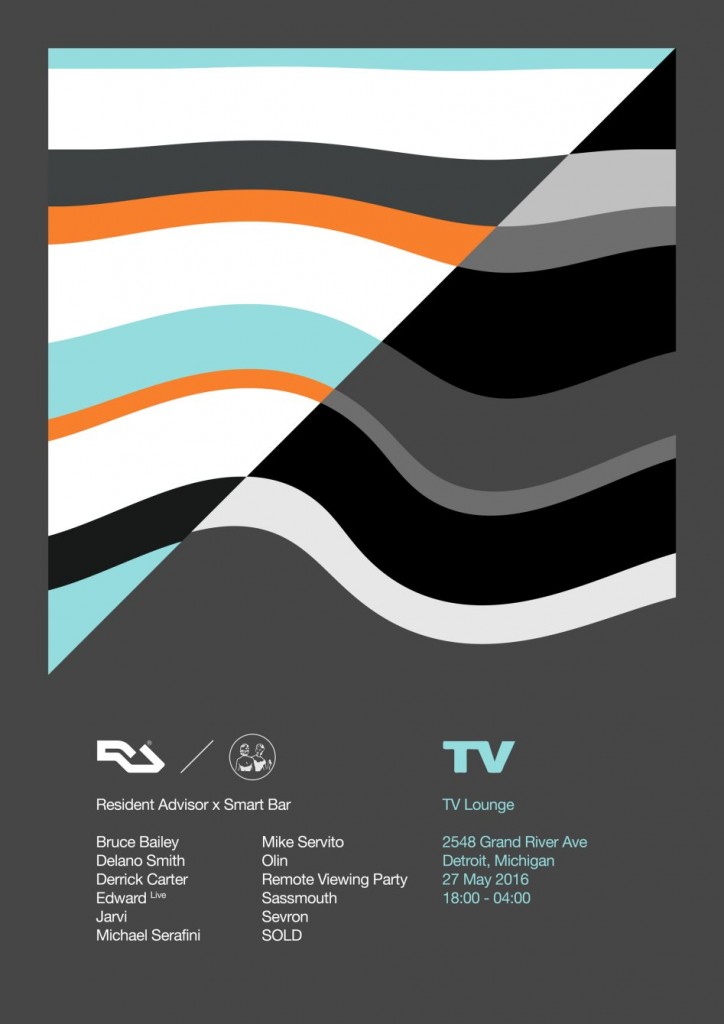 Chicago venue Smartbar and dance publication Resident Advisor team up again for an after party and BBQ at TV Lounge, featuring three rooms of great house and techno artists. Artists playing include Smartbar resident and Chicago legend Derrick Carter, a live set from Edward, Delano Smith, Bruce Bailey, and more. Tickets are currently $20 at Resident Advisor, and the event runs from 6 p.m. to 4 a.m. 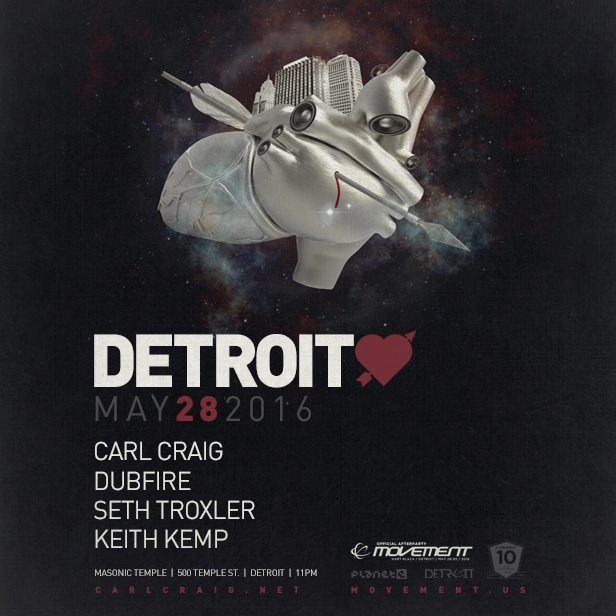 The Detroit Love party makes it way to the Masonic Temple after the first night of Movement, featuring four great artists. Carl Craig, Seth Troxler, and Keith Kemp, hailing from Detroit, comprise the lineup of hometown techno blood, while Dubfire plays a DJ set before unveiling his Live HYBRID set on Sunday night at Movement. Tickets are $30 at Flavorus, and the event runs from 11 p.m. to 4 p.m. 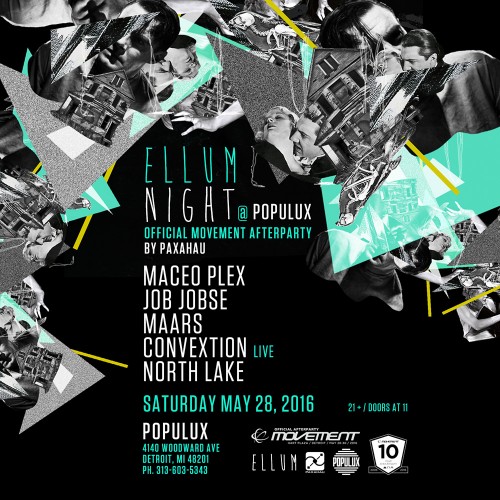 Shortly after his main stage set before Kraftwerk, Maceo Plex brings his own Ellum Records showcase to Poplux, featuring Ellum artists such as Job Jobse, Maars, Convextion, and North Lake. The set times have been posted on the official Facebook event as well, revealing that Maceo will go back-to-back with Maars late into the night. Tickets are $20 at Ticketweb, and the event runs from 11 p.m. to 4 a.m. 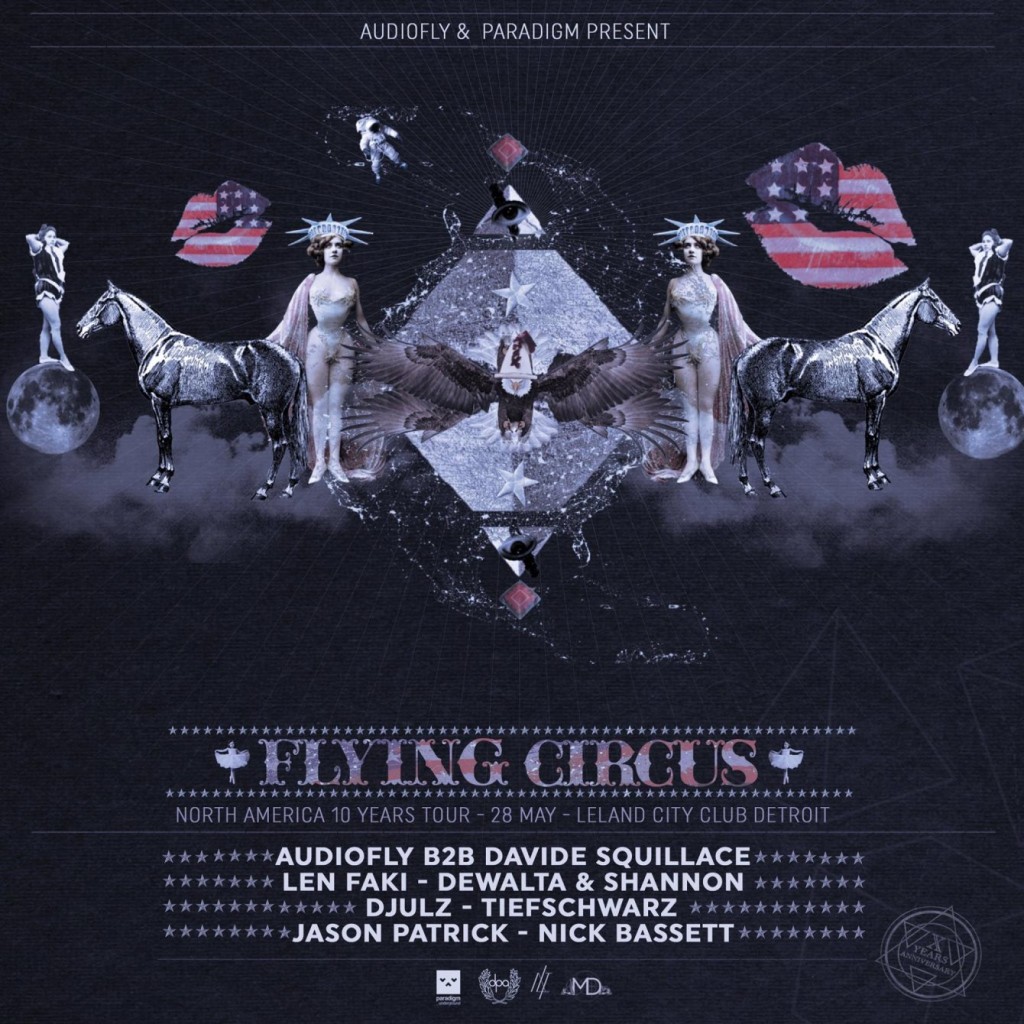 Paradigm returns to host another Movement after party, this party a piece of the Flying Circus tour set to hit the Leland Ballroom at the Leland City Club. The lineup was just recently announced, featuring Berghain resident Len Faki, a b2b between Flying Circus bosses Audiofly and Davide Squillace, D’Julz, and more. Tickets are $20 at Resident Advisor, and the event runs from 10 p.m. to 6 a.m.

With club and label head Moritz von Oswald in town, it only makes sense to have a party celebrating a whopping 25 years of the Tresor brand. Oswald headlines this party at the Tangent Gallery at the Hastings Street Ballroom, accompanied by artists like Terrence Dixon playing a live show, Mike Parker also playing a live set, and Regis. Tickets are currently sold out, but limited quantities will be available at the venue on the night of the show, and the event runs from 10 p.m. to 7 a.m. 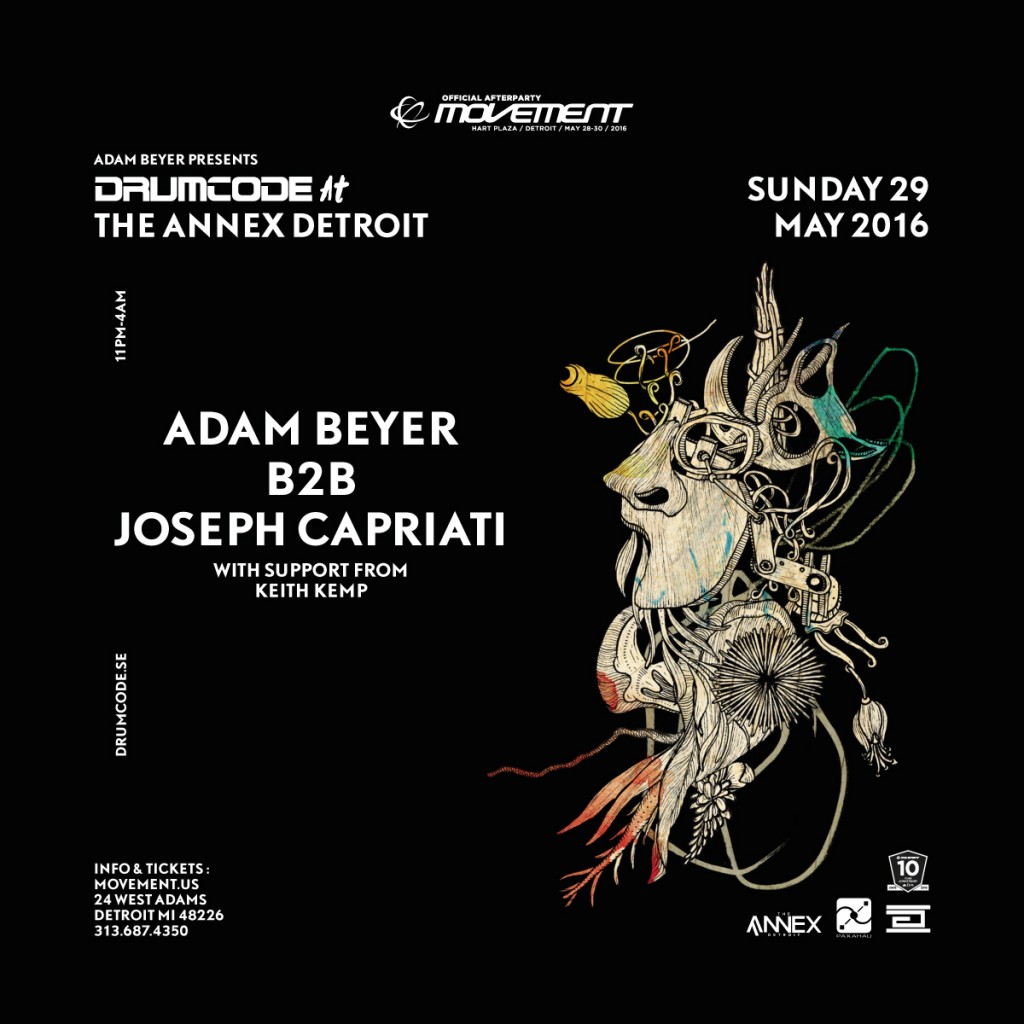 7. Drumcode at The Annex

Adam Beyer heads the first-ever Detroit Drumcode party inspired his Drumcode record label hours after his main stage set at Movement, playing a back-to-back set with fellow label hero Joseph Capriati. Keith Kemp also opens the show for support, and the entire affair will go down at The Annex venue all night long. Tickets are currently sold out online, but more may be available later, and the event runs from 11 p.m. to 4 a.m. 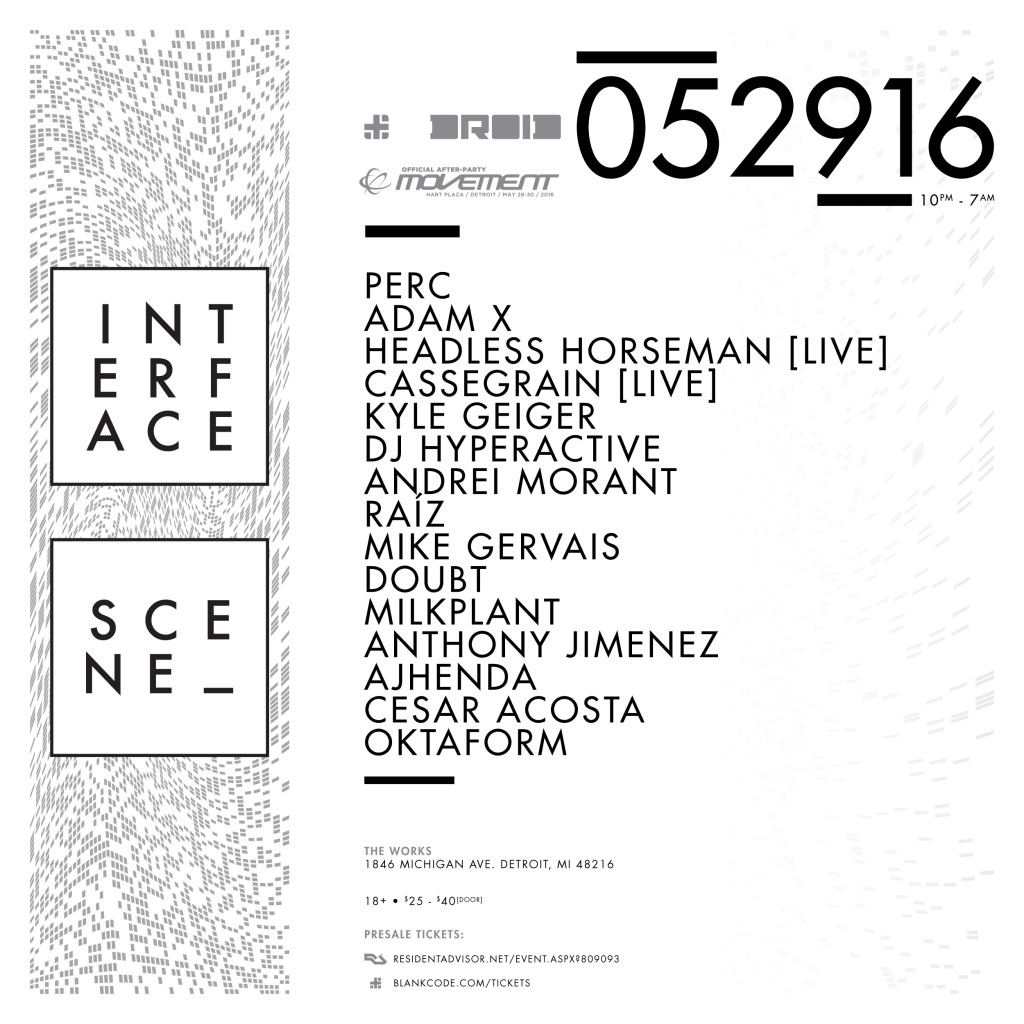 Techno heads, this one’s for you. Blank Code Records and Droid Behavior pair together for the fifth annual techno extravaganza at The Works, bringing rare U.S. performances from Perc, Adam X, Raiz, and Andrei Morant, and live sets from Headless Horseman and Cassegrain. Tickets are currently $35 at Resident Advisor, and the event runs from 10 p.m. to 7 a.m. 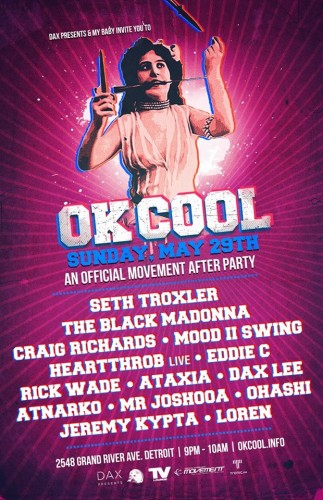 TV Lounge brings another great party, this time on Saturday night and featuring the likes of Seth Troxler, The Black Madonna, Craig Richards, a live set from Heartthrob, the Detroit debut of Mood II Swing, and many more. This party is simply called OK, Cool, and is celebrating its 4th year of amassing both Movement artists and local Detroit favorites for a fantastic evening. Tickets are currently $30 on Resident Advisor, and the event runs from 9 p.m. to 10 a.m. 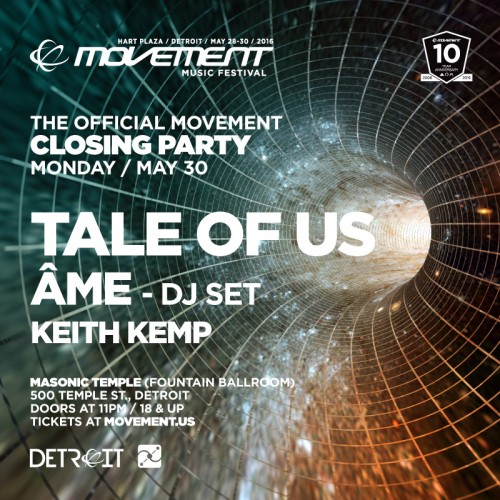 And here’s the official Movement party, fittingly pairing Tale of Us with the DJ half of Âme at the Fountain Ballroom within the Masonic Temple. Keith Kemp once again lands a big opening gig, and Tale of Us and Âme stay in town a day after their sets at Movement to present heart-stopping sets full of bigroom techno, techno, house, and unexpected genre shifts. Tickets are currently $20 at Flavorus, and the event runs from 11 p.m. to 4 a.m. 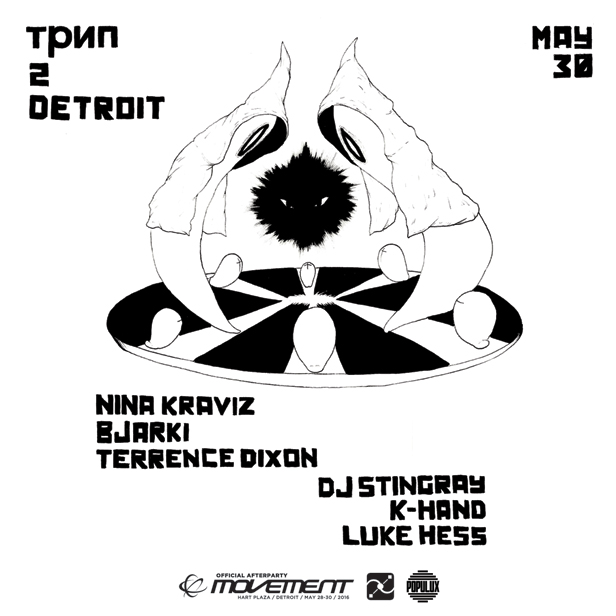 11. трип to Detroit at Poplux

Poplux scores another big party in the form of Nina Kraviz‘s label party for her record label трип. In tow are fellow трип superstar Bjarki, Terrence Dixon, a rare appearance from DJ Stingray, and others. Kraviz will be appearing shortly after her closing set at Movement’s Acid Showcase at the Underground stage, so expect some residual acid to hit the party. Tickets are currently $20 at Flavorus, and the event runs from 11 p.m. to 4 a.m.

12. Something Different at Marble Bar

Here’s an unexpected party featuring some unexpected heavy-hitters. Set to hit Marble Bar early Monday morning, Something Different is a first-time event featuring the legendary DJ Harvey playing a five-hour set as the sun comes up. If that’s not enough to sway you, Carl Craig, DJ Tennis, and others will be playing up to the event’s end. Tickets are currently $20 at Flavorus, and the event runs from 7 a.m. to 2 a.m. 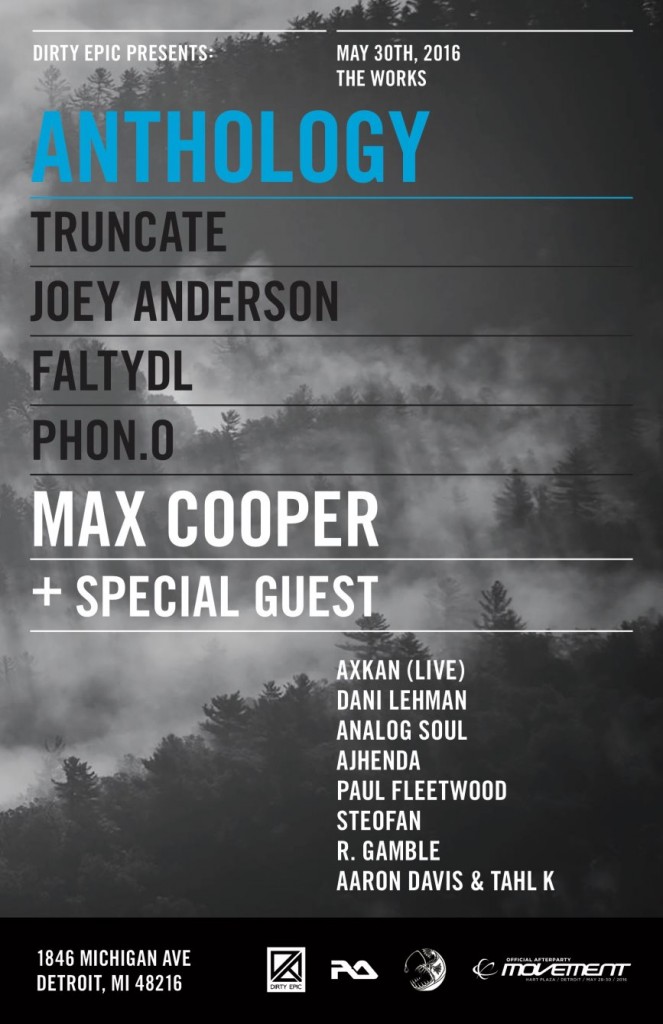 13. Anthology at The Works

Dirty Epic heads the fourth annual edition of the Anthology party, this time bringing a slew of talent for its closing party. Headlining is a very rare U.S. appearance from Max Cooper and a special guest, and sets from Truncate, Joey Anderson, and more round out the bill. This party at The Works is a staple at this point, and appeals to the techno and electronica fans. Tickets are currently $30 at Resident Advisor, and the event runs from 10 p.m. to 6 a.m. 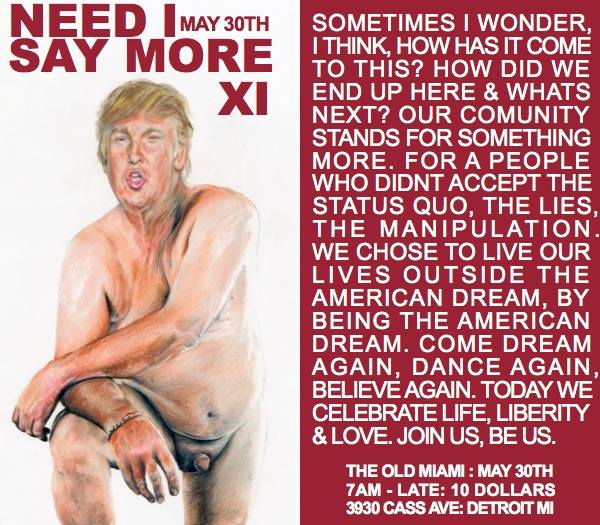 Almost as legendary as Movement itself, the Need I Say More party at The Old Miami has become known for its super secret sets and extended performances. Organized by record label Visionquest, past artists on the lineups have included Dixon, DJ Tennis, The Martinez Brothers, and more, so expect a lot of large-scale guests. The lineup won’t be revealed until the night before or the morning of the event, so keep your eyes and ears peeled. Tickets will be $10 at the door, and the event runs from 7 a.m. to whenever the event ends (seriously).

For more Movement action, check out our picks for the best artists to catch at the Movement Electronic Music Festival.