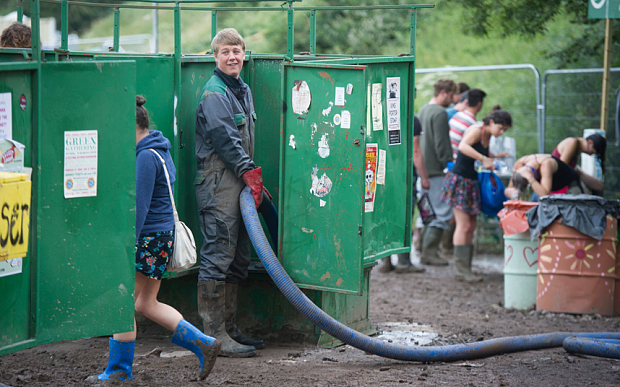 Glastonbury Festival is a serious beast. You may have heard of the famous UK festival for its insane music lineups, seen the Wellington boot craze, or perhaps you’ve gasped at the appalling amount of trash left behind in recent years. Now, to summon your gag reflex, Glastonbury is being fined for a sewage leak that killed 42 fish in 2014.

In 2014, thousands of gallons of human sewage seeped into a nearby stream, which killed some fish and harmed Whitelake River’s water quality. The festival pleaded guilty to speed up the legal proceedings and was fined $17,600 USD in addition to $27,900 USD in prosecution fees.

The district judge, Simon Cooper, commended the festival’s efforts to remedy the mishap, but the Environmental Agency wasn’t impressed, claiming the festival was unable to accommodate its rapid growth.

Glastonbury founder Michael Eavis has been hosting the festival on his own land since the inception of the event in 1970. Regarding the fine, he’s accepted full responsibility but isn’t happy with how they’ve been treated.

“It’s a great result and I think we were listened to fairly. I don’t really think it was necessary to get this far. We pleaded guilty to make it easier for them yet they still wanted to pursue this case.

I think it was a bit of a waste of time, to be honest with you. It wasn’t that serious a crime really. We did our very, very best when we found the leak – we really did all that we should have done within the timescale. This wasn’t really necessary. We should have been doing something else. We’re putting together the biggest show in the world in four weeks’ time.”