This article is authored by The Geek & Vrv.

We wanted Origami to have a nostalgic, delicate vibe that pulls from our past, while still working towards a future progression & evolution of The Geek x VRV’s sound.

Different countries, audiences and artists resonate with music on a human level. We’re always going to show love to those who inspired us and that’s something we can see with every artist on All Good Records. Live music, hip hop, funk, soul, jazz, whatever you want to call it, it’s always been about the music.

When Grant (GRiZ) first approached us, we were excited to bring something new with this record. That’s why we chose the name Origami, it’s the art of folding paper into all kinds of different designs. That’s where we wanted to go with our next EP, breaking down our core sound and creating something new & different.

Check out the music video for “Origami” for example, the story actually represents the creative process & artistic direction behind the EP. We wanted to have the cinematography include wild colors, animations, objects and really anything memorable help show fans the crazy process behind making Origami a reality.

“Coming Up” was one of the singles we’re most proud of. Featuring, singer Kellylee Evans who did such beautiful job.  Also we have Atom (of C2C) who helped lend his scratching talents to the beat too.

We’ve been had a blast performing the Origami EP in Europe the past month and can’t wait to bring our performance back to the United States.  So many special moments we’ve been waiting to save just for the North American shows.

Our US Tour starts in Los Angeles at Low End Theory on June 15th. You can catch us at 1015 Folsom the next day in San Francisco, Red Rocks, Knitting Factory and finally Electric Forest. It’s to be a big one with the rest of the crew and it’s safe to say that All Good Records is bringing a weekend of surprises to The Observatory stage. 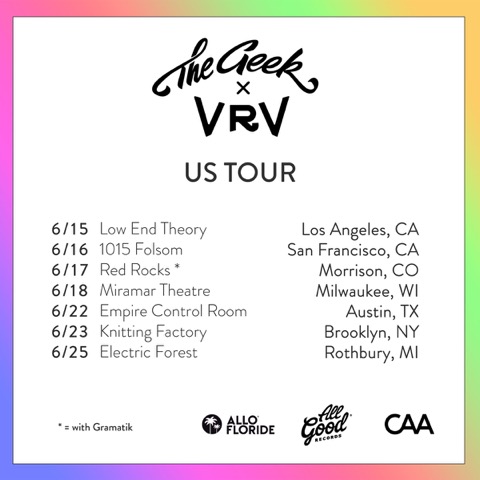 Since releasing Electric City last year, we’ve been looking to continue create our own recognizable sound from within Paris as well as the U.S. … Think of FKJ and Alina Baraz, Esta and Soulection, as well as groups such as Point Point & Club Cheval. We’re grateful to be joining our friends and peers at The Sound You Need Malta this August.

We wanted Origami to have a nostalgic, delicate vibe that pulls from our past, while still working towards a future progression & evolution of The Geek x VRV’s sound.