Yesterday’s video of Hippie Sabotage attacking security at What The Festival has gone semi-viral, with almost 400k views and two thousand shares off the initial post, with the majority of people on Facebook calling them out on their immature and unacceptable behavior.

In a statement to Williamette Week after the incident, they claimed, “It was an unfortunate event that placed us in an unsafe situation in the middle of our performance. We feel terrible that the fans didn’t get the full set, but we love performing for Portland and will be back.” All evidence in the video points to the contrary, and no evidence or testimony to the contrary except from Hippie Sabotage themselves has made its way into the public. It seems that rather than just take the hit and apologize, they’re continuing to make inflammatory remarks against What The Festival and their security, as well as “favoriting” tweets that supported their aggressive actions. 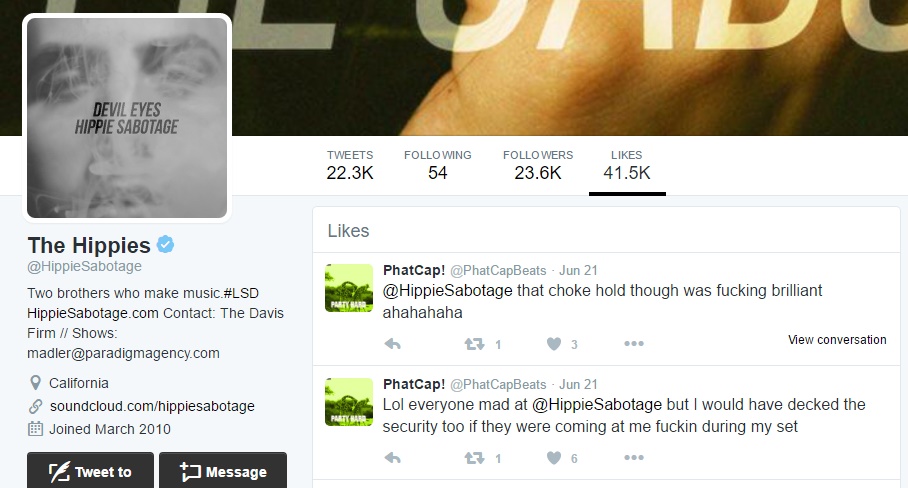 Tensions seemed to grow, however, once bass producer Ekali started getting involved on Twitter.

How high were you when you and your crew started a fist fight on stage at wtfestival and threw Mics into the pool? https://t.co/C1emcfdrke

Hippie Sabotage responded by taking to Periscope and live streaming obscenities and insults at Ekali and What The Festival, going so far as to call the latter “fucking garbage” and filled with “burned out tweekers,” and calling Ekali a “bitch ass motherfucker,” among other not-so-nice epithets.

Yo good vibes only @HippieSabotage 😂 also I'm not trying to "make a name off you" I have my own career. 👌🏻 pic.twitter.com/1DR28YzGOn

Too many promoters from areas all across the country have also shared the video and vowed to never support them again if they continue to act like children and only attempt to throw blame on others instead of taking the high road and actually owning up to their actions. However, their comments in the videos above would suggest that they are not planning on taking that road anytime soon.

Man Gets Arrested For Blaring His 80-Speaker Sound System

Get Ship Faced this July 3rd With Cazzette & Thomas Gold

Get Ship Faced this July 3rd With Cazzette & Thomas Gold