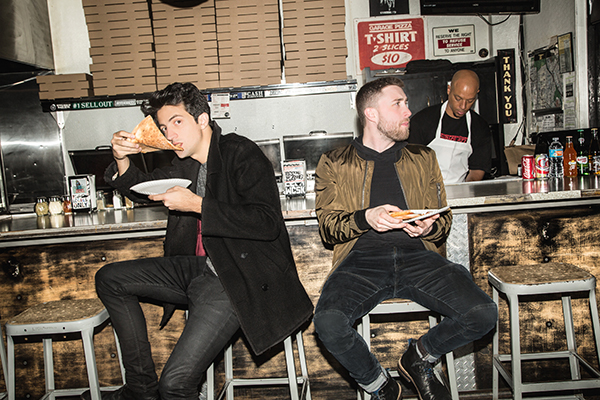 The man has been turning out more content this year than imaginably possible, whether it’s music, comedy or Snapchats, he’s busy at every turn. This time, he has remixed his good friends Phantoms, who you might know from their hilarious Snapchat mini-movies.

“Call My Name” has been making the rounds on its own, but a new infusion of flavor from Dillon Francis is sure to give it another substantial boost. The remix is the sort of genre-less fusion that has been gaining prevalence as of late, and we couldn’t be happier with the result. We don’t have to worry about what to call it or trouble ourselves with how to classify it, we just get to enjoy it.

So we’ve all seen you on Dillon’s Snapchat, how did that start out?

Dillon has been a really good friend of ours for a long time. We’ve always talked about making sketches and on a whim decided to do the first Snapchat story where he hires us to document his live show in Vegas, and we end up getting too drunk and just passing out by the end. The response was great, so we just kept collaborating and doing whatever we thought was funny. We all have way too much fun doing it.

How did the original name for “Call My Name” come about?

When we started writing the song with our friend Skylar, that was the first line that we started to sing during the chorus. It definitely started to allude to his relationship with his now fiancée Anna Camp, so we ended up basing the entire song around the idea of being head over heels for someone.

Who approached who about remixing it?

When we played Dillon a bunch of new originals early on, he really responded to that one. We asked him if he was interested in remixing it and luckily it worked out and he was able to. Even though he is a friend, it’s still an honor to have an incredible remix done by him and it’s really fun to watch the crowds react when he plays it out.

Are there any plans for an official collab with Dillon in the future?

As of now, there’s nothing set in stone, but you never know. Whether it’s Snapchat, music, or other stuff. Anything can happen.

If you’re digging the remix, get it below!