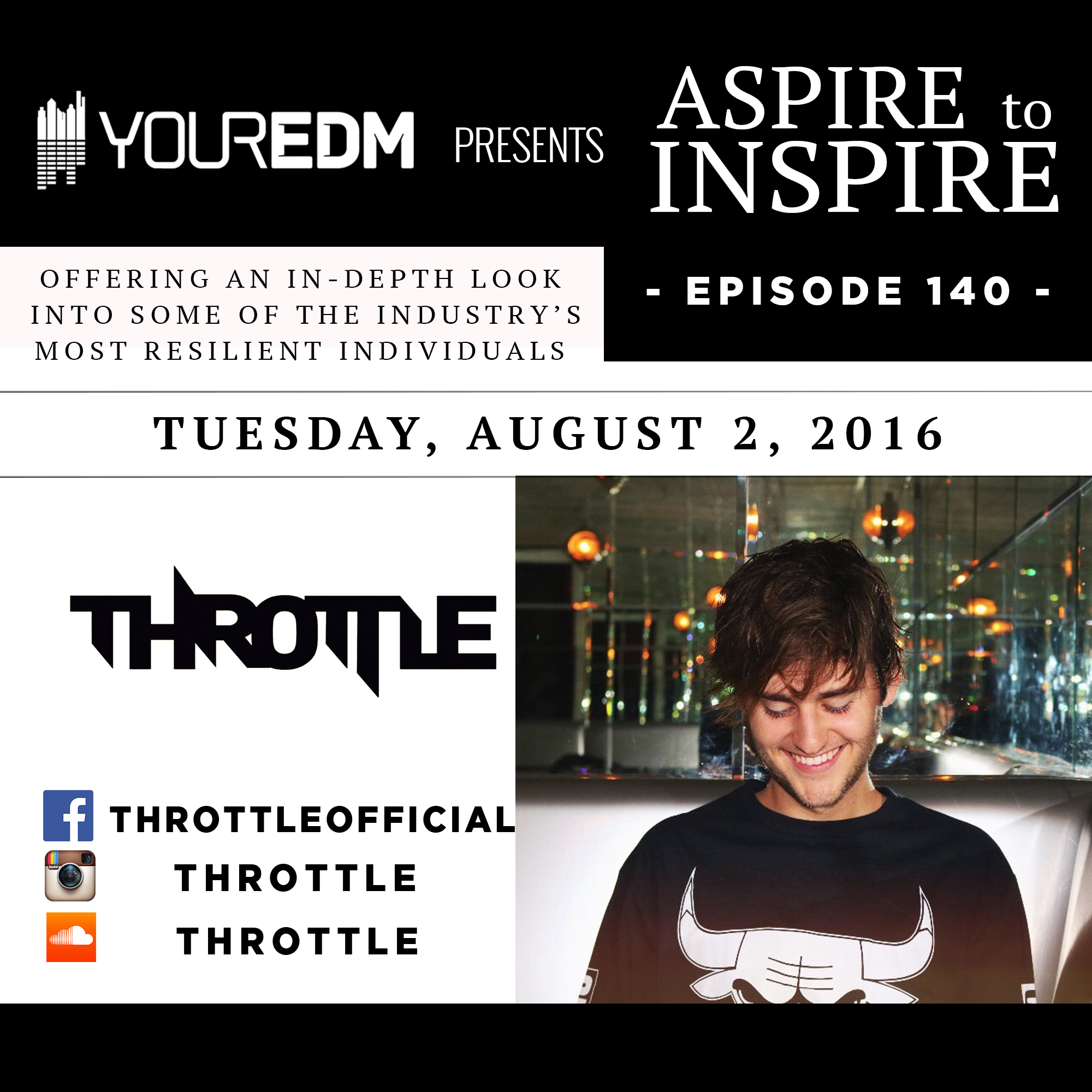 Music is the universal language. Everyone has a certain song that strikes a chord or that one artist you just can’t help but to swoon over.  Many people also grew up playing an instrument or taking voice lessons, however, very few people will actually pursue music as a career.  What happens when you’ve gone down the conventional path all your life, but you know you can’t just leave your passion at the wayside?  For one Australian named Robbie Bergin, he always followed a narrow path. He achieved good grades in school; however, he knew that he had to pursue the music career that could potentially await.  Thankfully for all of us, Robbie decided to pursue that dream and we now know his music under the moniker Throttle, including the smash hit “Moneymaker”, his remix of Earth, Wind, and Fire’s “September”, and his collaboration with Oliver Heldens, “Waiting.”

Robbie knew from a young age that he wanted to be a musician, however, he didn’t just have aspirations of being a DJ, he wanted to be like one of the biggest popstars on the planet – Justin Timberlake.  Although Robbie quickly realized he probably wasn’t going to be a Top 40 popstar, he could still bring live music to a DJ set, and his ultimate dream is to transition to the live music world.

“Well, my first show was Justin Timberlake, so my childhood dream was to be a performer in the Future Sex Love Sounds Tour. It had live horns, singers, dancers, and Justin Timberlake singing, dancing, playing the piano, of course…it was amazing.  About two or three years later I started DJing and then producing followed suit. Over the course of my career I want to gradually evolve from a DJ to a DJ/live-musician. I’d love to be singing and playing guitar but I guess that’s something I’ll have to take as it comes. It’s important to stay true to my dance music roots and not just forget all those fans and try to do something totally new.”

Robbie maintains a positive outlook no matter the circumstances. However, he has still gone through times where he didn’t feel like he was living life to the fullest. He has always worked extremely hard to maximize his output and shape his brand and sound, even when he just started out.  Robbie always did well in school and it wasn’t until his first year at college/university that he realized he wanted to make music full-time. Being the sharp guy that he was, though, he also knew that he had to craft and hone a unique sound and brand to go along with it as well.  For a full year, Robbie hunkered down and the musician known as Throttle emerged.

“I think the biggest struggle I’ve probably had was when I finished high school and had decided that I wanted to do music full-time. I did really well in school and was also producing music at the same time. It sounds like a luxury but it’s hard doing that for a year straight – working at home, trying to stay focused, and make as much as possible. And at that time I didn’t have enough momentum to go on the road for a whole year. That was a long year for me, but it was also the year I totally re-shaped my sound to a classier, disco-house sort of sound.  It’s the reason that things are taking off so quickly.”

It’s amazing how some clarity and direction in one’s career and life can lead to great happiness.  Throttle is a perfect example.  Armed with an idea and a purpose for his music, he is the living embodiment of his happy, upbeat disco-house sound.  Producers are like athletes, though. They can encounter hot and cold streaks, and it can be a struggle to regain traction after an extended period of productivity.  For Throttle, he says the ultimate inspiration comes from simply living life.  That’s where all the inspiration came from in the first place, right?

“I found that when I started making music I had all these ideas and I had so much inspiration that I channeled into my productions.  After a while I ran out of inspiration, because that inspiration came from 15 years of not making music and just living. So it’s important to keep finding inspiration not just from music, but also from all aspects of life. When you keep doing that, the ideas flow pretty constantly. I honestly never wanted to make music that was sad or heart wrenching. I hope that shows in the final product because I certainly have fun making it, and in turn, the hope is that it will create more happiness in our world as well.”

Although he’s taken the next step in his career and has become an international artist, the idea of fame and fandom remains something difficult to wrap his head around.  It’s incredibly humbling and inspiring for any artist to experience fan love, but it can be overwhelming, and there’s not really a class or tutorial for Dealing with Fame 101. Despite the juxtaposition, Throttle looks forward to seeing his fan base grow even more in the coming years.

“The idea of having fans is tough to comprehend for anyone I think. After my show in San Francisco at Audio on the Bay, I went out the front and had people asking for pictures.  It’s normal for most artists, but for me it was still crazy. I’m all the way from Australia and there are people who know my name and want to get a picture, which is pretty cool.  That’s started happening at all these different places and for me that’s fucking crazy.  The hope is that will keep getting bigger and bigger.”

With releases on Monstercat, Spinnin’, and Heldeep Records, and now an EDC performance under his belt, the future is bright for Throttle. As more and more fans look for more unique house sounds, artists who bring a unique musicality to the fold, like Throttle, will be more in demand.  Throttle is paving the way and leading by example. More people across the globe need to share his positive attitude and outlook. His sound is unique and singular, and will only help to break down more barriers.