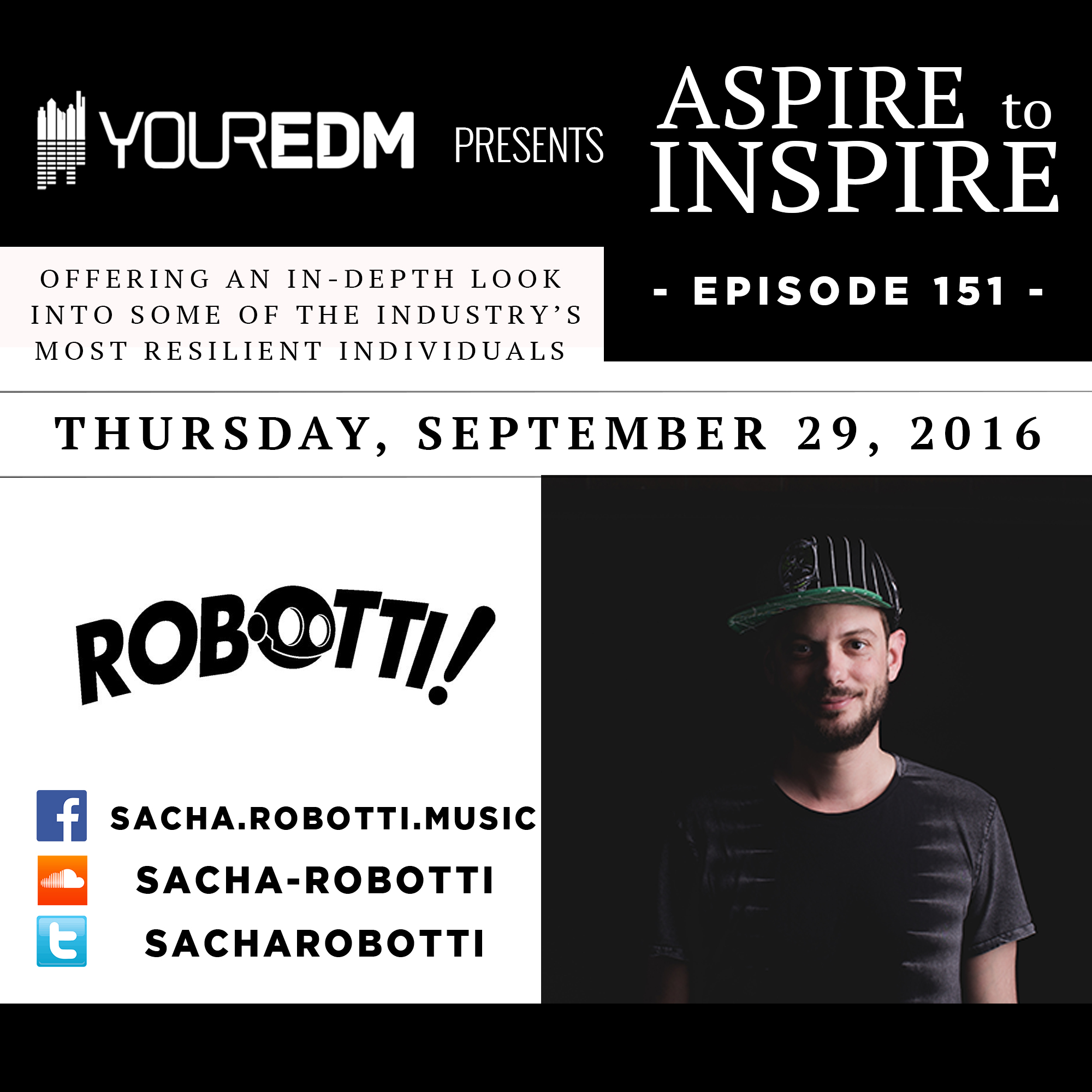 At a young age, Belgium born producer/DJ, Sacha Robotti was introduced to music thanks to his sister who took piano lessons. Robotti learned to play the cello instead, and had aspirations to one day play the instrument professionally. Music was not Robotti’s only interest, as he was also drawn to cars and considered car designer as a future profession. He even started looking for potential design schools to attend once he graduated high school. It seemed as if he had two great paths to choose from, with a promising and fulfilling career ahead.

At the age of 15 however, Robotti’s mother passed away, leaving a sour and emotional association with the cello. He escaped the stinging loss by attending underground raves and losing himself to electronic music. This helped with the slow healing process and inserted positive energy into his life. Robotti grew fond of this type of music, but never seriously considered a career could stem from it. Instead, his cousin influenced him to start studying architecture at 18 years old. As he dove into his architecture career, years later he was working in Afghanistan on the customs border wall — it was not a fulfilling job. He instead looked forward to coming home each night, where he would listen and produce music on his computer. This is what he truly felt passionate about, and finally, a light bulb went off inside his head.

Robotti decided to follow his newly found passion of producing electronic music. His new life goal was to become a full-time producer/DJ, and subsequently applied for an acoustic communication degree at a sound design school. Attending school was the only way his family would accept such a huge and risky life change for him. He was quickly accepted and jet set off to his new adventure in Berlin. At the school, he was taught by Karl Bartos, formerly Kraftwerk, and gained invaluable experience. Upon graduating, Robotti successfully released an album under the Berlin DJ duo alias, Robosonic. His long, tireless road of hard work was starting to pay off and he began to gain recognition within the industry. Just the beginning, his music career was on track and seemed poised for success.

With success, comes pain — literally. While he was 15 years old, Robotti suffered a serious injury where he broke two vertebrates. Now years later, he was still having trouble with his back, and experienced the excruciating pain of slipped disks. He could not sit, walk, or lay without feeling a paralyzing sting. He was at a point in his life where music was the only way he could make money. So, he continued playing shows with crazy amounts of pain. He would play sitting down to mitigate the sensation, and was not going to let anything get in between him and his love for music. Even after the doctor told him he would never walk again, Robotti did not let that deter him. Six painful months later, he was walking pain-free thanks to a combination of pilates, acupuncture, and pure will power.

Robotti’s outlook on life is what has gotten him through these trying times. He strives to be the best possible version of himself and always tries to look at things from a positive perspective. His “never say die” attitude has shaped him into the person he is today, and is a huge part of his success. His goal is to make people’s lives better through his music and help them forget about their problems for a few hours.

After grinding through a debilitating injury, it’s safe to say that 2016 has been the year of Sacha Robotti. After moving from Berlin to Los Angeles earlier in the year, his year has been nothing short of sensational. Notable appearances include Coachella, Lightning in a Bottle, Burning Man, and Nocturnal Wonderland. He credits his move from Berlin to Los Angeles as the catalyst for his success.

Throughout his life, Robotti experienced hardships that shaped and molded him for the better. His competitive nature and pure will gives him fuel every single day to keep going. He lets his positive personality shine through his music, and produces because of his genuine love for electronic music. Always remember to follow your true passion and never let anything bring you down.