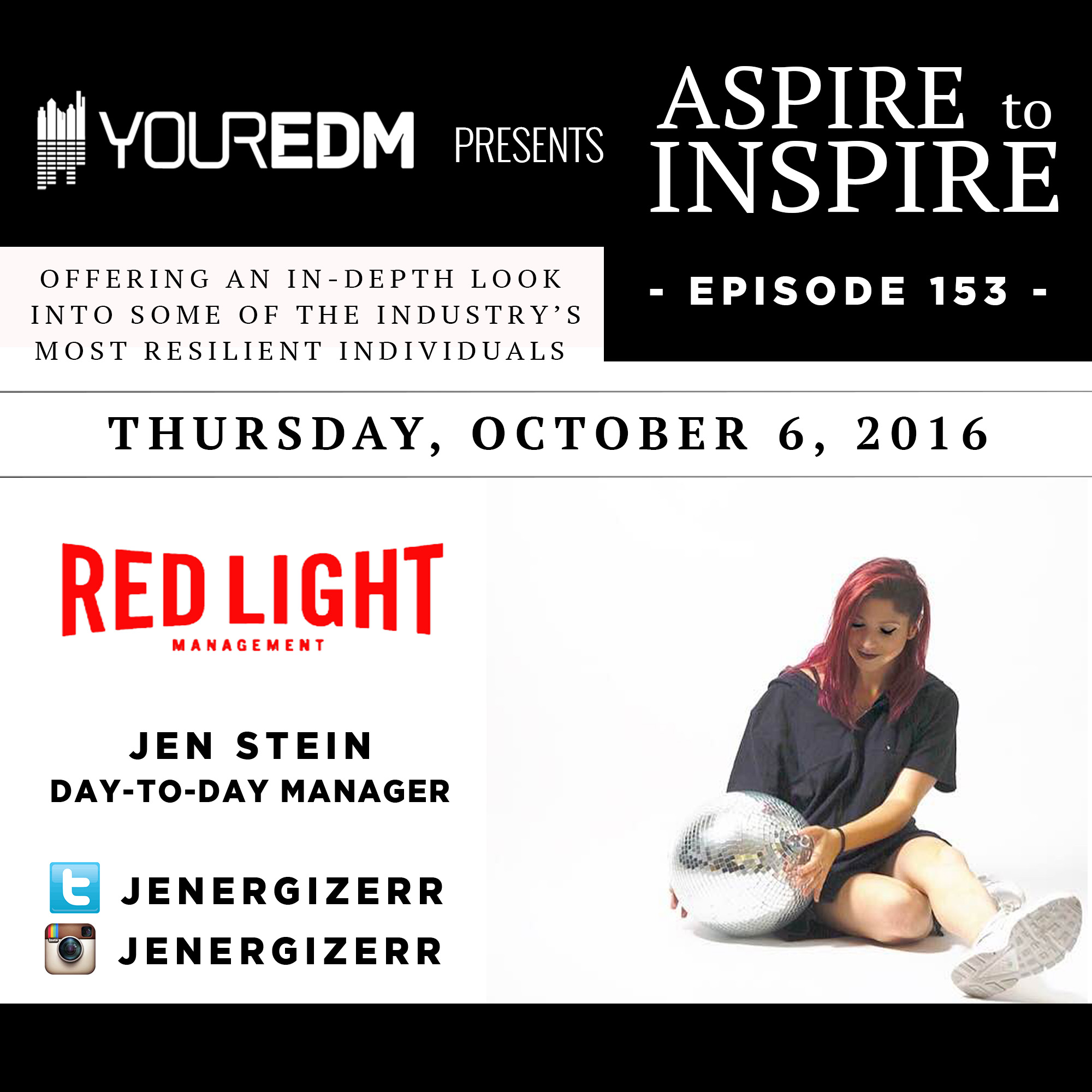 Some people know exactly what they want to be when they grow up. They plan out their lives in detailed schedules and follow along as if there is no other way to go about it. Then there are others who, although they may not have a specific plan, experience something that triggers inspiration and they build their lives around the energy of that experience. For Jen Stein, Day-to-Day Manager at Red Light Management, that experience was music.

Growing up, Jen was drawn to the high energy of sports and music. The concept of something that could unite people so strongly was infectious, as she later found herself majoring in sports management at The University of Michigan. Starting out as a promoter, she did everything she could to expose others to the magnetic effect that artists and their music had on her. She went from door to door in the dorms playing YouTube videos to random people, and emailed out her personal cell number to basically the whole school in efforts to make it easier for consumers to buy tickets. Jen had a knack for the music business right off the bat, as she consistently sold every ticket she was given to distribute.

“I always knew I wanted to be involved in something creative, but it has definitely evolved. I actually went to college to study sports management. I wanted to work in live events where both music and sports are involved. Growing up I frequented places such as the Verizon Center in DC, where I saw both sporting events and concerts. At that age I thought it was all intertwined. The more I got into it, however, I realized that they are two completely separate sectors of the entertainment industry. I think the energy that unites people together as sports fans or music fans is very similar. I just kind of fell into working in music, though. I actually interned in both sports and music throughout college, and even after graduation I still wasn’t 100% sure which industry I would start out in.”

Even though Jen has put the time in and created a name for herself in the music industry, there are times that it all still feels like a dream. Having recently visited her alma mater—this time accompanied by an artist she works with—it was a strange feeling to walk the grounds and not recognize the people anymore, even stranger to give advice about the real world in a class that she took not too long ago.

One of the most important lessons Jen learned during her time as a college student was how to work well within groups, and accepting that when the groups of students changed, your role in the group may change.

“My whole major was based off of group projects. The same hundred students would get grouped into five or six people. You would likely work with people again, and depending on the dynamics of the group you would need to adjust your role. You can’t always be the leader; you have to contribute in the way that will be most helpful to the group.”

She also learned many things that pertained to patience and determination. While many of her friends and fellow students seemed to land solid post-grad job offers starting their junior year, it was a bit nerve-wracking to not know what the future held. Choosing to follow the path that we believe will ultimately make us the happiest, isn’t always the clearest route.

“The majority of my friends and classmates at The University of Michigan were looking to work in finance, consulting, or advertising. Everyone had a job offer after internships junior year, but with entertainment it doesn’t work like that. I had been talking to a ton of companies, but didn’t understand why I had to wait until graduation for an offer (it makes sense now, so if you are still in school don’t stress!). So in efforts to land a full-time job, I ended up creating opportunities for myself. Red Light Management was actually my first ‘informational interview’ on a trip to Los Angeles. I started interning the next day. Saying yes to everything and learning how to say no when you’ve taken on too much is so crucial. I’m still learning how to say no to things because unfortunately, we humans still can’t be in multiple places at once.”

As Jen tells us, creating opportunities on our own takes a strong-minded individual, but knowing when there is too much on our plate is one of the most important secrets to success. Beyond that, there will always be things that are out of our control. Whether it’s travel accommodations, scheduling conflicts, or simply whether people like something or not—there is always the chance that something doesn’t work out. The way we handle that as industry professionals will make or break our futures, and for Jen that chance is what keeps her going day after day.

“In music and entertainment you can only control yourself. You can’t control anyone else’s actions or reactions. You can’t control the weather, you can’t control the airlines, you can’t control how the fans are going to respond to something, etc. No matter how much hard work and passion you put into something, there’s always going to be a part of it that’s left to chance and I love that. It’s so exciting, yet it’s also something that you have to learn to embrace. Starting out as an assistant, I was terrified of my first boss. I was terrified of ever missing a text or a call to the point where I would wake up at 3:00 AM, check his email and write out responses that I thought would be good, send it to him, get back up at 6:00 AM when he woke up. That was a little bit ridiculous, but everything is a learning experience. Finding that balance of what’s too ridiculous and what will help you succeed is important. I like to say yes to every opportunity that comes my way.”

The people in Jen’s life are also her major inspirations. Giorgio Moroder, three time Academy Award and four time Grammy-winning, yet still touring musician, is at the top of that list. Working with someone whose music inspired her in the first place is a surreal feeling, but also an endless source of inspiration and motivation.

“He’s always working on music. He knows so much about pop culture and what’s currently going on politically and socially in every single country…it’s just amazing. He knows everything about everything, he’s still passionate about what he does, and still touring. If he can get himself up to play a 3:00 AM set and stay up working until 4:00 AM on music the next day, then what would I ever have to complain about? I’m lucky to work in his presence, ya know?”

One of the things Jen would love to see in the dance music industry’s future is the involvement of more women.

“As a part of Nap Girls (a non-profit whose mission is to connect and empower women and gender non-conforming individuals by nurturing creative and professional growth), I think there needs to be more women in the industry. That’s also a matter of women realizing that they can do it and being taught that the music industry isn’t just a boys club. I studied sports management and started taking some informational interviews early on in college. I would meet with women, high-powered executives, and they would tell me that they would tell their daughters not to pursue sports because it’s a ‘boy’s club.’ I think that’s the wrong mentality. I would tell a younger girl to ‘do whatever the f*ck they want.’ You need to just make your way and show everyone who is boss.”

By starting small with realistic short-term goals, the major accomplishments we seek may not be as far off as we think. Whether it’s selling 50 tickets to a show in your first job (or in Jen’s case, to prove she should be hired for a job), taking the first step towards a career as a woman in a male-dominated industry, or lifting others up in support, the first step opens the door to new opportunities. With this mentality, Jen hopes to have a positive impact on the world through her work, as well as supporting the Josh E. Levine Foundation. Josh Levine was a student at The University of Michigan who died weeks after graduation from co-ingesting alcohol and stimulants during a night of partying. He was one of Jen’s closest friends in college. His mother created this foundation to provide education about the dangerous combination of stimulants and alcohol, and to change the culture of binge drinking among young people. As someone who chooses not to indulge in alcohol or other substances in a field of work where the champagne is often popped, Jen finds that people’s awareness of what can happen when certain things are mixed is of the utmost importance.

“You’re never going to stop people from making their own decisions, but I would love to get to a point where I could help raise money and awareness for the Josh E. Levine Foundation and prevent another tragedy like Josh’s death from ever happening again. That is definitely one of my short-term goals.

I never judge anyone for drinking or partying. I just think that as motivated people we are all so capable of taking things too far, working too hard for days, and then doing whatever you can on your one night off. While I stopped drinking due to an injury (unrelated to Josh’s incident), I quickly realized that by being sober, I was always 100% in control of my actions. People ask me all the time how I can be in this industry without drinking, but for me I do it because I love it. If I ever get to a point where I need to get drunk to enjoy my job, it’s time for a career change (seriously though…good music + dancing = endorphins). I love seeing all my friends grow in this industry. There are people I worked with in college and we are still working together today. Not drinking definitely does not equal not partying. I am guilty of seeing one too many sunrises in L.A. – getting caught up in the good music, good vibes, and good company around me.”

While Jen brings a unique perspective to the party culture of this scene, it’s important to take into consideration. Having the time of your life at a concert, specifically dance music, is absolutely possible without drinking or using drugs. The music, dancing, and connection alone free us from our burdens and make us feel alive.

Jen would like to leave us with one final piece of advice (taken from her Facebook status):

“I truly believe that what is meant to happen, will. There is no such thing as good luck, bad luck, or merely being in the right place at the right time. Your decisions may impact a means to an end, and what and how you learn along the way. But if you take each situation with stride, cherish the good, and learn from the bad…it will all work out how it should.”