Apple has opened themselves up to relentless criticism over the last couple years, if not for their lack of innovation, then for the removal of hardware that we’re not yet ready to part with.

Now, days before the expected announcement of a new MacBook Pro, images have leaked regarding one catching new feature: the Magic Toolbar. 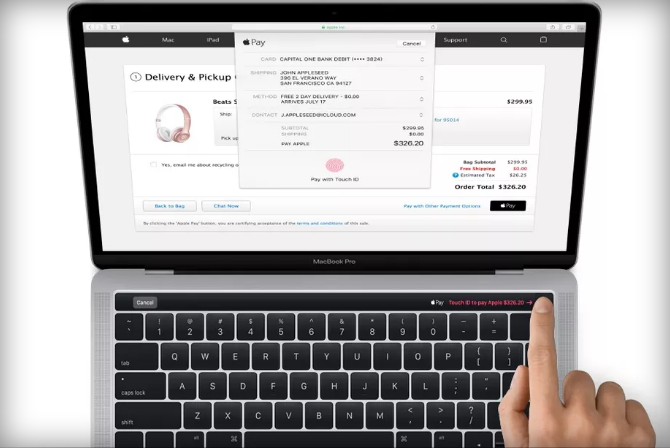 We can’t say for sure that it’ll be called the Magic Toolbar, but Brian Conroy has sighted a trademark filing for the name and traced it back to Apple. Seeing as they also have hardware names like the Magic Mouse, Magic Keyboard, and Magic Trackpad, the new addition makes perfect sense.

Regardless of its name, the new touch panel at the top of the Pro’s keyboard is getting a lot of attention. There appears to be a fingerprint scanner on the right side of it, and in the leaked images it serves as a convenient way to complete an Apple Pay purchase in seconds.

When not in use, the panel will appear a natural black just like the other keys, but will be capable of displaying color, buttons, symbols, and a host of other intuitive features yet to be seen.

Apart from the touch panel, the new MacBook Pro will have flatter keys, a thinner bezel surrounding the screen, and likely some increased performance. Stay tuned for Apple’s event on Thursday to learn more.