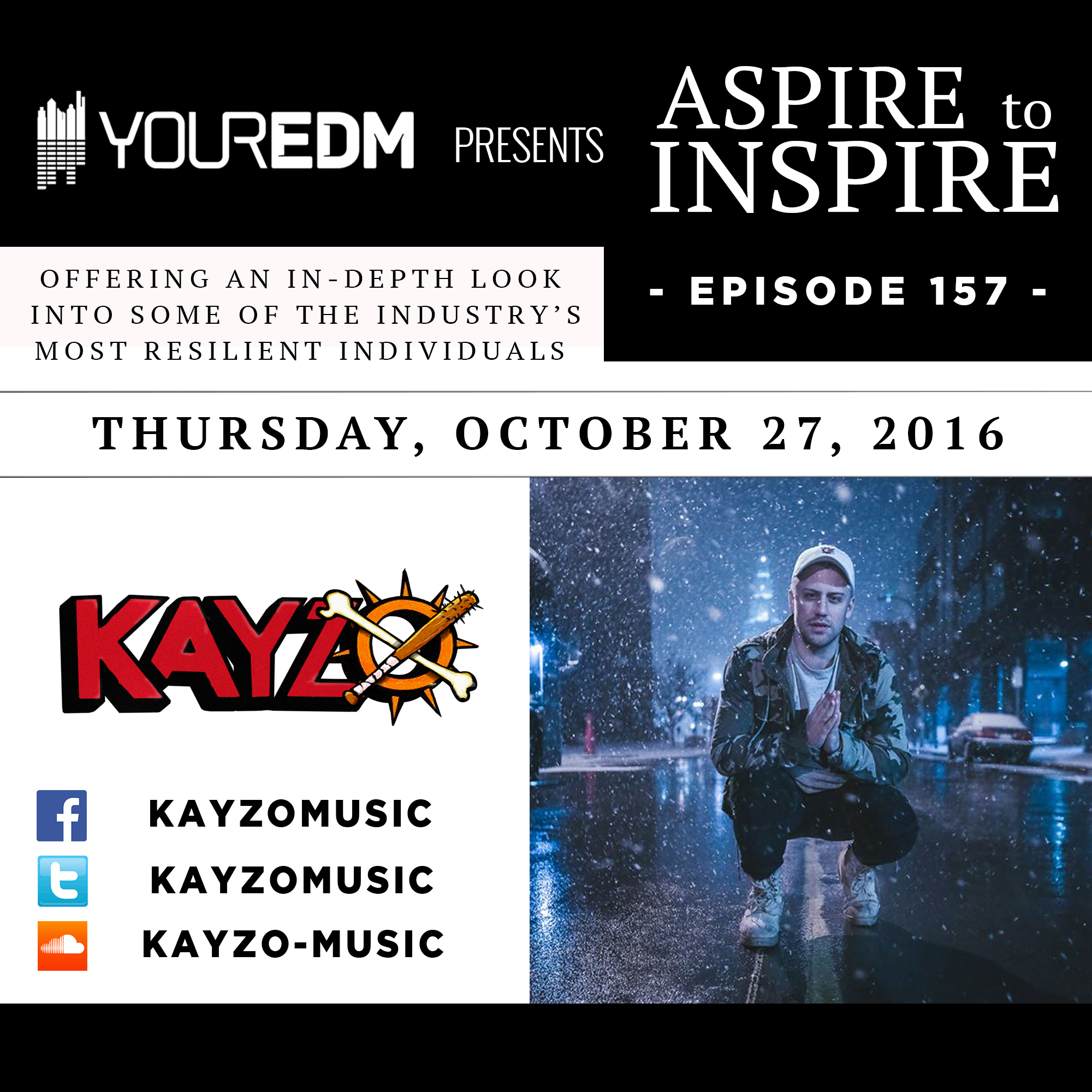 Music has a funny way of sneaking into our lives. Whether we are actually focusing on it or not, music is constantly surrounding us on the radio in the car, as we walk through shopping malls, while watching our favorite sport on TV or at the arena. For Hayden Capuozzo, better known by his artist name, KAYZO, an early career in athletics was the catalyst for the bass-heavy DJ/Producer we know and love today.

Hayden found himself in ice skates at the age of three. Back then hockey was the biggest part of his life and this did not go unnoticed. An exceptional talent for the game landed him a spot on a team that took him far away from his Texas home, all the way to Salt Lake City, Utah. It didn’t take long for music to settle into his life as a motivator— little did he know how permanent it would become.

“I was always the kid in the corner with headphones on before games. I would get super focused through music. It was my outlet from the stresses of big games. I was first introduced to electronic music when I was 14. I moved away from home for a select team that was based out of Salt Lake City, Utah. The team ended up having players from all around the world. My first taste of electronic music came from having the kids from Sweden and Finland play it throughout our locker room speakers. At that time, I was really big on hip hop and pop punk, so when I got my first real listen to this type of music, I was immediately intrigued and wanted to know more about it. That was the start to a true passion for electronic music. From then on I got super deep into it and began to research different artists and started to develop a taste for specific genres of dance music.”

Years later in 2012, Hayden found himself on the cusp of graduation from Icon Collective, a highly acclaimed music production school in Burbank, California. Having only nine months of producing experience, he decided to enter Insomniac’s Discovery Project contest for Escape later that year.

“I had only been producing all together for 9 months so for me this was nothing more than practice. I had no real ambitions to actually win. Two weeks later I received a call saying I had won the contest and my song was chosen for the official festival recap video. It was a HUGE moment for me as I was coming to the end of my studies at Icon and was about to be let loose into the music business world. To me, this was real motivation and a major realization that my first 9 months of making music and all the hard work I had put into it so far was worth something. It gave me the confidence to move past school with realistic goals of making it in this industry.”

Many of us have heard the saying about doing what you love and you’ll never “work” a day in your life, but the incorporation of our passions into our profession can be tricky. Looking back over the success and experience Hayden has had so far, there are a few things he wishes he could tell his younger self.

“I would want to go back and tell Hayden the athlete to not be so hard himself. I think the biggest flaw I carried throughout my youth was putting too much pressure on myself and taking things too seriously at times. The higher level of hockey I played, the more stress I would put on myself. I forgot to have fun. I forgot that I grew up playing this sport because I loved it, and at the end of the day you should love what you do and have fun.”

The same can be said for a life in music. As Hayden began building his career, he was able to take the lessons learned as an athlete and apply them to his work ethic as an artist. By holding himself to a higher creative standard that still allows him to enjoy the good that comes with it, the passion he has for electronic music constantly grows.

This of course does not change the risk involved. There are many people in this world who wish they took opportunities to make a name for themselves in music, but the financial risk was too high. In major cities where the music business thrives like New York, Los Angeles, Nashville, etc., the cost of living can make the necessary exposure seem impossible.

“It’s extremely expensive to live in LA, and there is a time when many young artists will look into their bank account and realize they can’t even afford a real meal, let alone rent. It was really tough at one point before signing to Circle Talent Agency. I didn’t know if I would be able to really support myself as just a musician. I figured the only way to fix that was to work as hard as I could and focus on nothing else. Instead of stressing and living in the fear of failure, I decided to take that energy and use it in a positive way.”

Although it may be a more immediately frightening obstacle to tackle, money certainly isn’t the only hardship that so many artists like Hayden face. There is a significant trade off in the time between artists trying to make it and artists who have seen their careers take off. Before Hayden began touring and traveling for shows, he had a number of people who kept in touch with him and remained close. As time went on and KAYZO became bigger and bigger, there was less time for catching up with friends and visiting with family.

“I think now more than ever “KAYZO” has become my whole entire life. I’m touring nonstop and spend most of my time either in hotels or airports alone. It’s funny, though. At one point before I was traveling to play shows, I had a ton of friends that I’d see or communicate with often. I would have time to go home and visit my family in Texas. All the while my goal was to make this music thing work and be happy. Now that things are working, I find that my main friend circle has sized down to about 3-5 true friends. I spend a ton of time alone working. Even at shows with thousands of fans surrounding me showing me love, I can still feel like the loneliest person in the room. It can become depressing at times for sure.”

Aside from the pressures of touring and time spent away from loved ones, the rapid pace of the electronic music industry can weigh a lot on the mind of an artist. With music being so overly accessible these days, the need to stay with the pack can be overwhelming. As Hayden describes it, staying relevant has at times become more important than the product [music] itself.

“I would like to see things slow down, to be honest. I’d like to see more artists take time to plan music releases. At times it can seem like everything passing my SoundCloud is old news a day later. Yeah, it shows there are a TON of talented artists out there, but it has put that pressure on a lot of us to release music for the sake of just having consistent content.”

Presenting himself in the most authentic way he possibly can has always been important to Hayden— especially in an age where social media presence, likes, and followers are unfortunately of the utmost importance to many.

“I just want to keep doing what I’m doing. I wake up everyday and feel like I’m living an honest life. To the way I dress, the music I make, and how I interact with anyone and everyone. I treat fans no different than how I treat my fellow artists. No one is better than the person next to them. Seems to be too much entitlement these days.”

We could all certainly learn a lesson from the example Hayden sets. If we make the effort to be true to ourselves and our creative styles, and treat others with respect, regardless of status, we would see a dramatic change for the better.