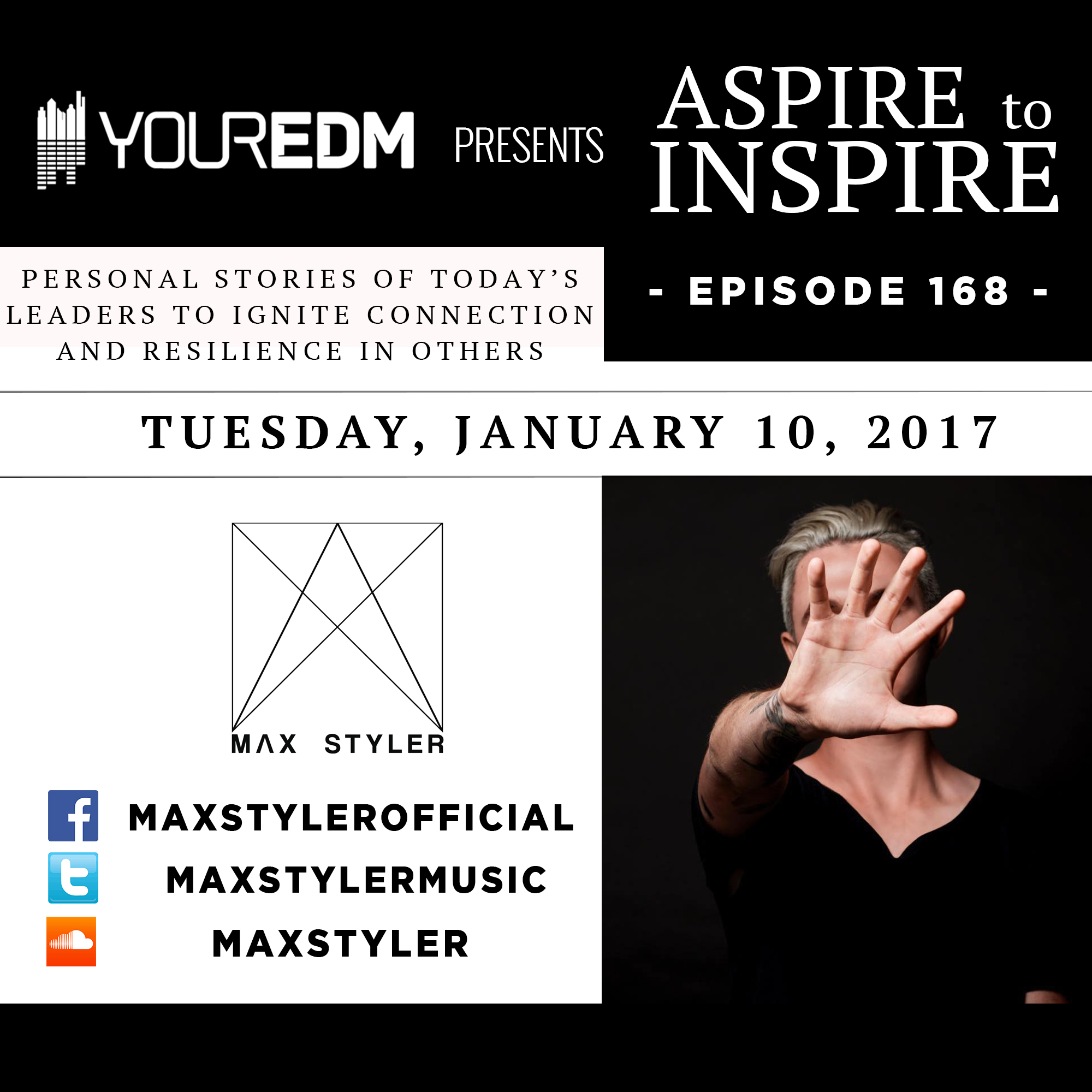 At only 20 years old, Max Styler is one of the rising talents in the electronic music world. Not only has the prodigious DJ/producer already released a full-length album, he is also signed to Steve Aoki’s prestigious Dim Mak label. While Max has already experienced tremendous success at a very young age, his life has not been without its challenges. However, Max’s strategy is very simple – he doesn’t let his fears consume him and has his sights set on attaining his goals. With the positive support from his family, Max has been able to successfully pursue his dreams. Although he originally wanted to be a rock star, Max is quite happy with his current position.

“I try to not let fear ever stop me from pushing forward. I tackle what I have to do, in spite of being fearful at times. If you put your end goal in front of your fears, you can push through challenging obstacles. When I was younger, one of my most exciting childhood dreams was to be in a rock band. I had this image of being the lead guitarist of said band and tour the world. My journey with music has evolved since then and now instead of touring the world with a guitar, I’m touring the world with a USB drive and a pair of headphones.”

Max grew up and when not traveling resides in the quiet California town of San Luis Obispo, located on the central coast about a three-hour drive north of Los Angeles. He says it is the perfect place for creative people. He also cites his family as his biggest inspiration and some of his biggest supporters. In fact, Max was born with a foot condition that should have prevented him from walking. However, his family never gave up and found the right doctor.

“Not a lot of people know this, but I was actually born with a foot condition that was supposed to prevent me from ever walking. My family, however, found a doctor in San Diego who was able to operate and fix my feet. It’s scary to think that I wasn’t supposed to be able to stand on my two feet. I would be in a very different place right now in my life if it weren’t for that doctor and my family’s perseverance. My parents have been my biggest inspirations throughout my life. Both of them have worked incredibly hard to achieve their goals and I think that growing up in a hard working environment like that rubs off on you. I’m inspired by my parents’ willingness to accept my untraditional path. They recognize my passion and respected my desire to enter into the music business, despite the reputation of this lifestyle. The greatest thing about my career choice is that I have already achieved my goal of making music the center of my life. I hope to make a strong impact on the world with the music that I will make in the years to come.”

Although Max is still very early on in his career, he already has a sizable body of work, and for a while he was even unhappy with the music he was releasing. We’ve all heard about the tropes of making songs that sound more suitable for a DJ set, as opposed to stand-alone singles. Max realized that he wanted to make music that conveyed emotion and he threw conventions to the wind. Now Max is more satisfied and more productive than ever with his music.

“In the latter part of 2015 I found myself making music that was forced and had to follow too many guidelines for my music to just be played by other DJs. A song needed a 30 second intro of just a drumbeat, it needed huge build-ups and long outros, etc. Honestly, I was getting a little tired of making the same songs that followed a very similar layout. Thankfully, I finally broke through that boundary in 2016 after having a long writer’s block. I then started releasing music that I really believed in more than ever. It was an awakening for me and I’ve really been on a creative high ever since then. It blows me away sometimes to realize that my music is connecting with people all around the world that I have never met and may never meet in my entire life. My fans help me achieve my goals/dreams and what I love to do, and for that, I love them more than they know.”

It truly is amazing what one can achieve when they set their mind to it. Max Styler is a living testimony. Blessed with maturity beyond his years, Max firmly has his eyes set on where he will be headed musically in 2017 and beyond. Max Styler is only getting started. As he has evolved in his short time in the industry, he is sure to do so in the future and only influence more listeners.

Additionally, he hopes to impact the world not just through his music, but via advocacy as well. With a passion for reversing climate change, Max has already set out to do his part in sustaining the earth’s resources and longevity. We hope that his closing thoughts inspire you to get involved with causes you are passionate about as well…

“In my opinion, climate change is a very real problem the world is facing, but unfortunately our leaders are still continuing down a path of destruction because there is too much money to be made in the fossil fuel industry. I hope that in my life time there is a major breakthrough in society’s modern day norms of destroying the one planet we have and taking into count the bigger picture we are facing as a whole. We are the primary drivers of change on Earth. As far as changing this and reversing climate change, I plan to donate as often as I can to charities fighting the cause and also cut back on my own carbon emissions at home. Whether it be the food we eat, turning the lights off when you leave a room, driving an electric car, consuming less water, everything helps. I could go on talking for hours about this, so here is a link for anyone who happens to read through my interview and is interested in what I am talking about. https://www.beforetheflood.com/act/.”