Longtime member and resident vocalist for the immensely popular EDM/hip hop group K Theory Malcolm Anthony announced on Tuesday that he had officially quit, a statement that the attorney for remaining K Theory member Dylan Lewman denied. “I’m finally free,” he wrote in a tweet, referencing the “years of creative differences” that ultimately led to his departure from the project.

Let's get this new chapter started!

In an interview conducted through email and messaging, Anthony revealed the timeline of K Theory from its start in 2011 to the present, in addition to several significant pieces of evidence regarding the purchase of beats from third-party websites that were then labelled as their own work.

After K Theory was founded by Lewman and Dustin Musser in 2011, Anthony was brought on as the group’s rapper. He became the face of their iconic live performances, and said that it was he who spearheaded the creative direction of the group’s sound.

But contrary to the perception from the group’s fan base, this sound was not founded on original productions, Anthony said. He purchased pre-made beats from a website called Soundclick.com, then proceeded to add his own vocals and alterations to make the tracks fit a more EDM-oriented format, he said. “Even our first 10 records we did together were produced by an old friend of mine named David Spears,” Anthony said.

Anthony provided links to two of K Theory’s releases and their pre-made counterparts. The first, “Got Me,” was released in April of 2016. The beat was originally created by an entity called Lexi Banks Music Group, linked here. The second song, “Choices,” was also created from a pre-made beat and then released in May of 2016, linked here.

Underneath the K Theory versions of the pre-made songs, attached below, is an email receipt from the purchase of another Lexi Banks beat. 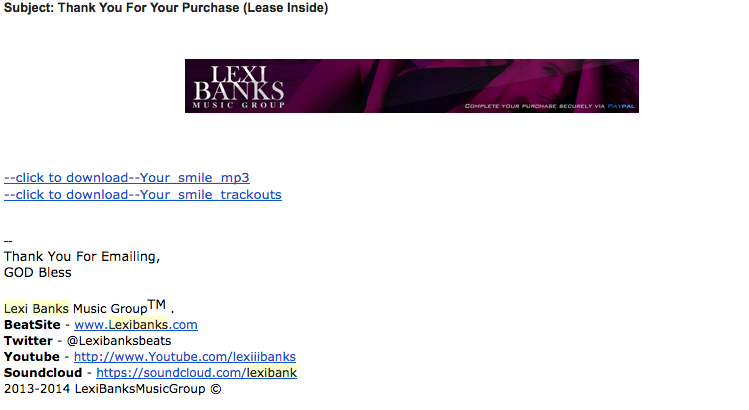 Even their most recent release, “Turn It,” was made by someone named Heuse from New Delhi, India, Anthony said. As of Friday morning, however, Heuse has denied these claims.

“I’m not saying I had nothing to do with this because I did,” Anthony continued. “I allowed K Theory to pretend to be some producing giant when really it was just me picking dope beats from online, flipping them a little to make them EDM friendly and dumping the K Theory logo on it.”

Anthony went on to provide a complete list of every K Theory-released track that he said was either bought or created with unoriginal material, many of which turned out to be the most popular and recognizable songs from the group’s discography. The list, in its entirety, can be found below.

In 2014, the members of K Theory founded New Trinity Music Group, a record label aimed at highlighting the best work from a pool of their friends, collaborators and monitored up and comers. After developing differences in their personal and professional relationships, Anthony said that Lewman became the sole signatory of a distribution agreement without Anthony’s knowledge. Once Lewman kicked Musser – “who did all the production for any record that was actually K Theory”- out of the project six to eight months ago, Anthony said, Lewman gained full legal ownership of the project.

Even though he separated from K Theory because of creative differences, Anthony said that he was left in the dark about the distribution agreement until Monday of this week, when he stumbled upon the information while attempting to set up his own label with the same distributor. Now, Anthony said he will be taking the news to a small claims court, where he hopes to transfer his catalog of music to his new imprint and break unwanted ties with Lewman.

“He still owes me thousands in royalties and refuses to pay or contact me,” Anthony said. “He lied to me and my friends about our contracts in which give him ownership over our masters. I’ve started a small claims and we’ll handle it in court.”

When reached to for comment, Michelle Kennedy, attorney for Lewman, issued a statement on Lewman’s behalf.

“K Theory Music LLC (K Theory) is solely owned by Dylan Lewman. Malcolm Anthony was never a founding member or co-owner of the company. He was only a contracted band member until K Theory terminated his contract yesterday evening. Malcolm has been paid in full for his services for K Theory as of December 31, 2016. Dylan has no comment on the remaining allegations at this time, but he takes such accusations seriously and he is prepared to take any appropriate actions that may be necessary to defend his rights and image. K Theory looks forward to releasing new music in 2017.”

Despite his approaching legal battle and alleged lack of royalty payments, Anthony said that his future in the music business is bright.

“As for me. I will continue to pursue my Malcolm Anthony project. Releasing music under my own imprint Manahan Village,” he said. “We signed a distribution deal with Empire yesterday and I’m really excited for this launch.”

Rather than be bogged down by the commotion, Anthony said he is treating the situation as a learning experience.

“It sucks that my relationship with K Theory had to end this way, but it taught me a very valuable lesson. Not everyone is your friend, even in EDM.”