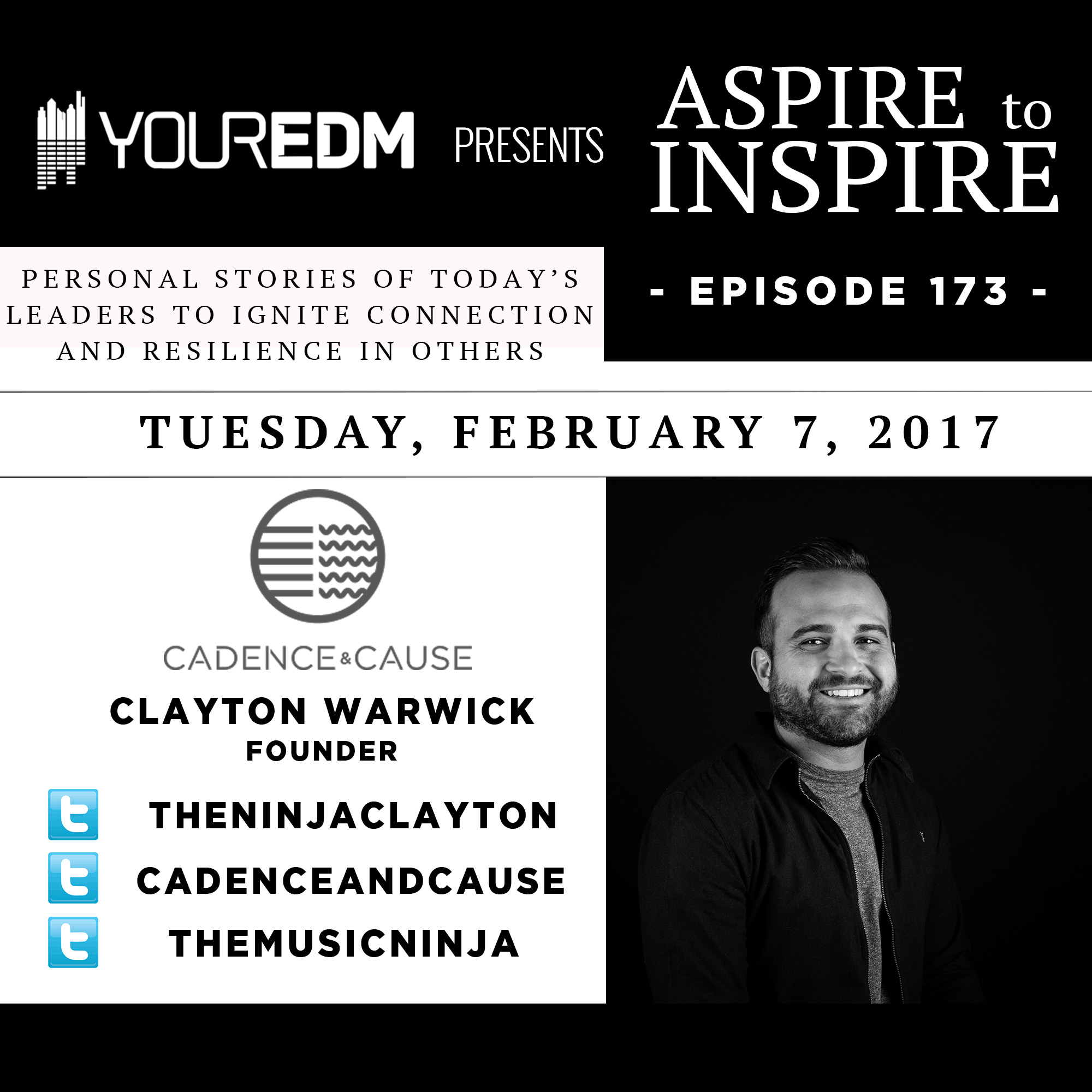 Building something from the ground up often deters a lot of people from chasing what they really want to do. The safer and more stable route is most often taken because the risk of losing it all can be scary.

For Clayton Warwick, Founder of charitable platform, Cadence and Cause, Co-Founder + Artist Relations Manager of music publication, The Music Ninja, and Artist Manager for Bobby Nourmand, the risk has absolutely been worth the reward, time and time again.

Clayton grew up in Colorado and was a music fanatic from a very young age. During high school he developed a love for the music industry as well, and then experiencing Warped Tour several years later ignited the flame for his now 10+ year journey working in music.

“I fell in love with the music industry when I was in high school, but it wasn’t until Warped Tour of ’06 where I really became enveloped by it. I went with my best friend’s band to help them out. I was just selling merch for them, but the pageantry of the tour really got a hold of me. All of those moving pieces falling perfectly in place. They all came together and provided people with such an amazing, joyful escape.”

Although he did not study music throughout his college years at Metropolitan State University in Denver, Colorado, Clayton’s passion for it grew. He studied marketing and went on to land a few positions at advertising agencies, which he enjoyed. But just as any person with aspirations, Clayton’s draw to the music industry pulled him towards a very different opportunity.

“At that time, Hype Machine was just starting to pick up steam, and working in agencies you have a lot of early adapters as far as new technologies and music-centric things, so someone introduced me to it. Through it, I discovered The Music Ninja and found that it represented me as a music consumer because it covered various genres from indie rock to folk to hip-hop and any type of sub genre of dance music that you could imagine.

They had an open call for new writers and I tried out. I submitted a sample piece and they brought me on board. At first it was just a hobby, but once I got about six months into it and saw what the blogging world was like, that was when I connected the dots and saw it as something that I could transition into professionally.”

Sometimes all it takes is that first step, that one chance to stray from the usual nine-to-five we are expected to fall into, that leads to a new life and profession. Once we get passed it, it can seem like the jump wasn’t so bad after all.

Looking back, Clayton only wishes that he had gone for the opportunity sooner.

“If I could tell my younger self anything, I would have said to keep playing music, not to stop, and also to start working on what you’re passionate about as early as humanly possible because it wasn’t until I was 25 or 26 that I realized I could do and create things in my own time. Following my passion ultimately led to working in the field that I loved. I wish I would have started when I was 19 or 20 and have that many more years doing something I truly enjoy.”

What is it that keeps us from making that jump? Of course there is the idea that it may not be as financially stable as other jobs, but the competition is a major factor as well. Like many others, Clayton initially felt as though working in the music industry was an intimidating and cutthroat environment. Countless people have tried and failed, even the most passionate have come home defeated. But sometimes it works out, and does so in such a way that we chuckle at our previous conceptions.

“I’ve worked with some of the nicest people in this industry and made life-long bonds. I think that cutthroat stipulation makes me laugh now because I thoroughly enjoyed a good majority of the people I’ve worked with in music.

As far as obstacles go, however, there are so many to count. I have challenges all across the board. But to keep it simple, whenever you’re doing something on your own, it’s high risk and high reward. You’re putting your heart and soul into something and there are certain situations where there have been investment dollars and you’re really worried about making it. You’re worried about it being successful, and when you’re doing something that is truly yours and yours alone, you realize it lives and dies by what you do. If what your doing isn’t successful, it’s nobody’s fault but your own. One of the biggest obstacles for me was overcoming failure and realizing that even though it’s just me (of course, aside from The Music Ninja, where I have a team), you feel like the world is riding on your shoulders and that’s okay. I learned how to weigh the successes a little heavier and give myself a bit more credit and be a little easier on myself when failures come around. They inevitably will, especially if you’re chasing your passion and doing your own thing.”

Learning how to turn failures around into successes, even if just in your memory of the experience, is a major factor in how you approach things in the future. Turning them into not only learning experiences, but also fuel for the next idea, is a sign of maturity and resilience we could all take a note or two from.

Had Clayton not pushed forward and stayed true to his ideas, we may not have the inspirational project known as Cadence and Cause today.

“People kept hitting us up for giveaways and I saw the magnitude of things that are given away for free for the sake of social media and promotion. It’s astounding. Something clicked and I thought well this has a lot of value well beyond just promotion. I just connected the dots and asked myself ‘what if some of these things were used to raise money for charities that need it?’”

Cadence and Cause has generated countless memorable moments for fans, as well as donations to those in need by using music, merch, memorabilia, and experiences with top artists and festivals to give fans a chance to meet and connect with their favorite artists, while also raising money for charities picked by the artist involved. While many winners and donations have been chosen, there is one moment that sticks out in Clayton’s memory.

“One of the first really significant campaigns we did, we had the Pegboard Nerds at Global Dance Festival in Colorado at Red Rocks. Someone had entered for a chance to win this ultimate sweepstakes, which included dinner with the guys backstage, all access, photo session, hangout, and all that jazz. The Pegboard Nerds surprised them and brought them on stage in front of 8,000 screaming fans. The look on these two people’s faces as they ran their homemade Nerd Nation flag across the front of Red Rocks blew me away. But beyond that, we raised money to help provide hearing care for children in third world countries. I believe it was around 300 children that we provided with care. Seeing what was once just an idea of mine now connecting these two kids to Pegboard Nerds in a way that they’ll never forget and giving people in another country something that they wouldn’t have had, was absolutely mind blowing.”

Having spent as much time in the music industry as Clayton has, he would truly like to see more people take the time to help each other out. He has had many mentors throughout his career who helped him learn as much as he could and prepare him for the positions he holds today and hopes that others can have that same experience and aren’t afraid to ask questions.

“The industry is changing constantly, so no author can keep up with how fast it evolves. You have to rely on people who are in it and doing it and working on it. I’ve always tried to carve out some time to help anyone who needs it, whether it’s with writing or explaining my process on something. I’d like to see more of that in this industry and help others who are trying to come up and are very passionate about it.”

As cutthroat and intimidating as the music industry may seem, there are always those who are willing to lend a helping hand and show you the way. If you are willing to ask questions and get involved in something you truly love, who knows, maybe one day you’ll be the founder of your own organization too.