Deadmau5 Calls Out The Chainsmokers And The Internet Loves It

There’s nothing like waking up to the fresh scent of beef wafting upstairs from the kitchen. On today’s menu, Deadmau5 called out The Chainsmokers in response to a tweet sent out by The New York Times regarding a new podcast episode about the fast and uncomfortable rise of the duo’s popularity over the last three years.

In the Popcast episode, titled “How Do You Solve A Problem Like The Chainsmokers?” Caryn Ganz, pop music editor of The New York Times, Julianne Escobedo Shepherd, culture editor of Jezebel and Larry Fitzmaurice, senior culture editor at Vice, discuss the “softening of the Chainsmokers’ sound.” Deadmau5’s response was aimed at the title itself, which he answered candidly and without filtering.

In his own tweet, Deadmau5 implied that the pair have tailored their style to fit the formula often rewarded by the Grammy Awards, and even claimed that they use a ghost producer.

View the tweet below, and check further down for a few hilarious reactions sent in by fans of the mau5. 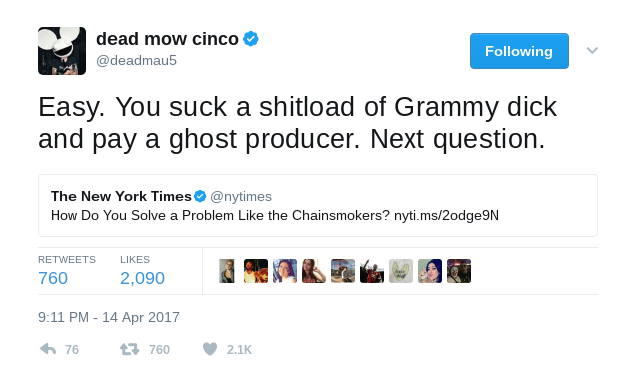 Mysteryland 2017 Has Been Canceled, Official Statement to Follow [DETAILS]

Mysteryland 2017 Has Been Canceled, Official Statement to Follow [DETAILS]