Yesterday, Diplo’s “Bank Roll” resurfaced on Soundcloud, with Justin Bieber notably missing from the track. The Soundcloud description offered a brief explanation, stating, “other artists made soundcloud take down the Justin Beiber version because they had exclusives with him” (sic).

However, the metadata tells a different story, as that description wasn’t the original one on the track. The original reads, “DJ Khaled and Guetta made me take down […]” rather than “other artists made soundcloud take down […]”. 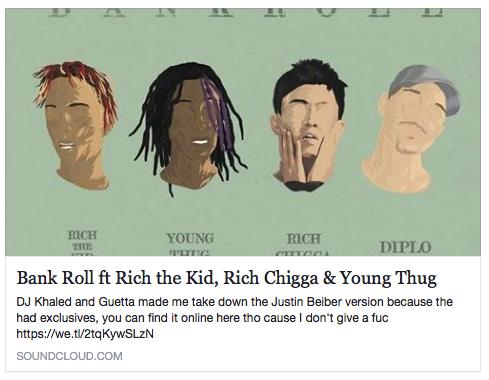 This tells a much different story and, honestly, is more in tune with Diplo’s usual self than the description currently shown on the track. Label exclusives are a terrible thing that create chasms within artist groups and cause mishaps like this to happen. Thankfully, they’re not that common (or at least not known to the general public), but this one happened to hit just above the radar threshold.

Khaled released his collaboration with Justin, “I’m the One,” on April 17. David Guetta will release “2 U” with him tomorrow, June 9.