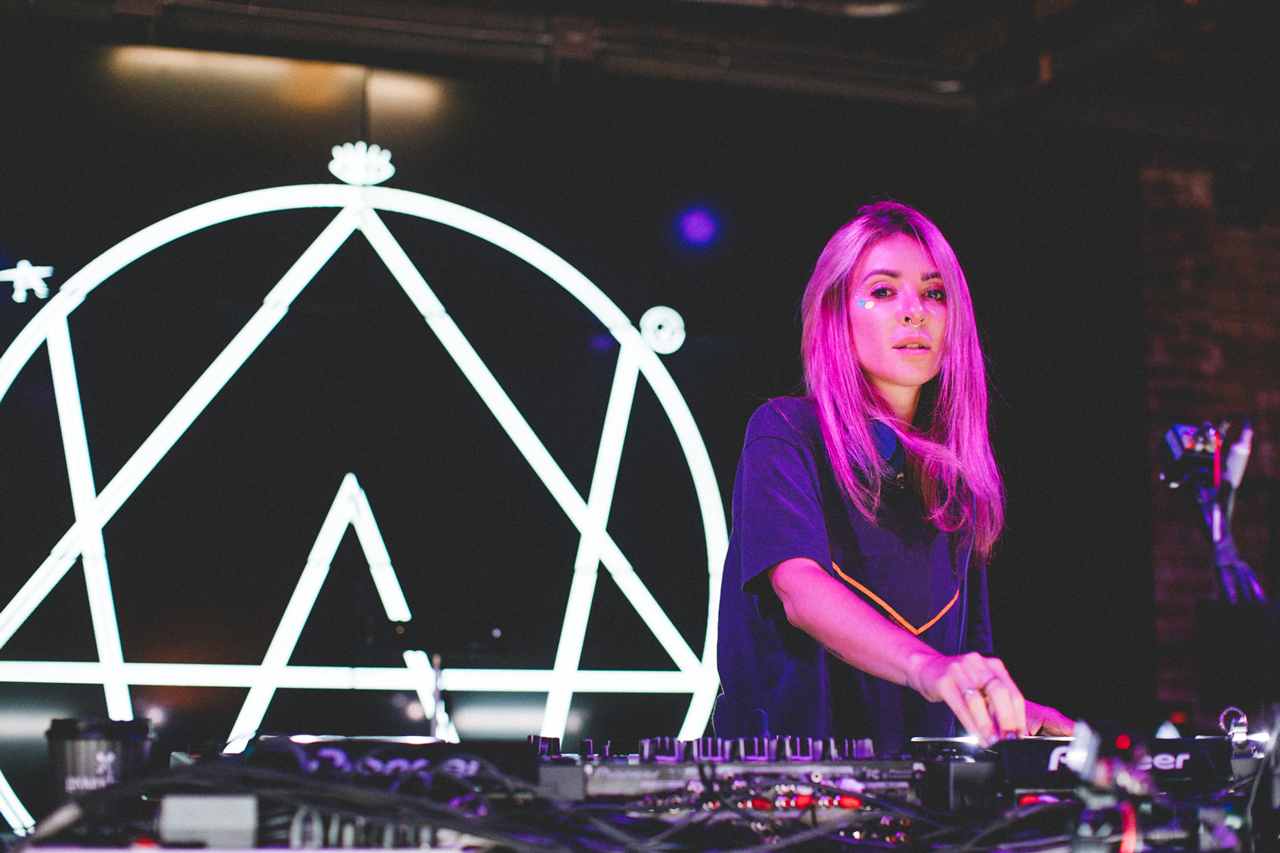 This past Tuesday, Your EDM was invited out to an exclusive event to preview Alison Wonderland‘s new visuals before they were debuted at Lollapalooza this weekend.

Alison’s visuals have always been a reflection of her personality, often quite literally – using GoPros, he visuals often depict some version of herself, layered with crazy effects and templates to create new scenes and interesting patterns for ravers. Now, she’s taking that same idea and evolving it even further with the help of Microsoft.

Part of Microsoft’s ongoing series, Music x Technology, the collaboration with Alison Wonderland was particularly exciting as “she was eager to explore how Microsoft technology could create a bigger and bolder stage show for her fans,” said Amy Sorokas, Strategic Partnerships Director of Microsoft Brand Studios. “We are always looking to highlight forward-thinking artists, who are as excited as we are to push the boundaries of the music experience.”

Alison Wonderland stated “All I’ve ever wanted was for people to leave my shows feeling like they have truly experienced something. I feel like the project with Microsoft, which I’ve been working very hard on, has really helped bring my vision to life. I want people to forget about their phones and enjoy the ‘now’.”

To create the visuals, Alison and her team utilize the Microsoft Kinect and Surface Book to render visuals in real time with 3D mapping. In the demonstration on Tuesday, one Kinect was placed in front of and behind her, created a depth field for the visuals. Then, her VJ was able to choose from a variety of templates to affix onto Alison and create real time movements on screen. It’s truly the next evolution in Alison’s own imagination.

Before the demo, we were able to sit down and speak with Alison about “Fuck Me Up On A Spiritual Level,” her new album, and more. Watch the video below for a better idea of what goes on behind the scenes, and read the interview below. Alison will debut a taste of her visuals at Lollapalooza in Chicago this Saturday, though he says that’s only the tip of the iceberg. The real fun will begin on her FMUOASL tour.

What’s life been like since your last North American tour?

It’s been amazing. I did not ever see my life turning out like this because of what starting off in my bedroom. I was trying to stay sane – DJing at night, and I’ve been writing music for a long time, for bands and playing cello —

Yeah, yeah. I’m a classically trained cellist. And so, I was just kind of making electronic music because it was making me happy and it didn’t really make me feel any sort of way except, like, complete. It’s such a cliche answer but it’s actually what happened. And you know, for the longest time, no one was writing back to any of my emails and then, all of a sudden, I’m in American playing shows and that–

The first time I did my North American tour was after I had done Coachella, which was my first proper American show. I wasn’t sure what the response would be and it was amazing to be able to play an album to any type of crowd and have them sing it back to you. That was crazy. To be honest, that kind of response kept me going and kept me wanting to write more music, kept me wanting to play better sets… I kept challenging myself because I wanted to make the people that came to my shows feel something.

So yeah, life’s been crazy, and I’m about to finish my next album so that’s also been insane. Honestly it’s been a bit of a blur. I’m literally just doing me and the fact that people responded to it was crazy.

Do you have a favorite song that you feel always connects with the crowd?

I think a lot of my music all equally mean as much to me. But I guess “U Don’t Know” really connects with the crowd because I’ve explained it. It’s one of those songs where I’ve taken the time to tell people what it was about; obviously I’m quite open about mental illness. I wrote it about my own struggle with depression and every time I play that, I tell people to let themselves go and realize that it’s okay to be in touch with how you actually feel and to reach out to people. I guess that’s the one that really resonates the most with people because I’ve been the most open about its meaning.

But if I were to be open about half the shit I make I feel like people would resonate with other songs, too.

Is there one coming on the new album that you think could potentially be like that?

I don’t know. There’s crazy meaning behind every song on this new album. I guess I’m more comfortable with myself and putting it out there this time around, and I’m happy to explain the meaning to all of the songs this time. It’s a scary thing putting out a record because you have this moment where you realize that your diary is now public, and people are about to hear your innermost struggles and loves and…

I know your friend Lido, when he did his album release here in LA, he took the time and explained every single song. I had heard the album a couple days before that and I was listening to it. So to have him explain it all after I had already listened to it was eye opening.

I’ve got a funny story about that, actually. Before he even released the album, he was in his studio and he called me up, he’s like, “Do you wanna come around have a listen at what I’m doing?” I’m like, “Okay.”

And he sat me down and actually spoke me through every song before he played it. I was in tears throughout it; I know him so well on a personal level, I really empathized with what he was going through. And him explaining it to me made me listen twice as hard. I was just so moved by it. You can always tell when something is from a real place.

“Fuck me up on a spiritual level” is a movement — the merch, the tour, the feeling it represents — Do you remember the exact moment when that phrase came into your head?

Of course, 100%. The first time that phrase came into my head I was playing a show — people think that the first time was at EDC Orlando but it was actually at Voodoo in New Orleans. I’m really adamant about feeling a real connection with the crowd when I play. I have to feel it. If I haven’t felt some sort of connection with the crowd after I get off stage, I don’t feel satisfied with the show. I need to feel something very real there; it’s almost like a primal thing for me.

And I was just up there, and I don’t know… the first track came on and I just wasn’t feeling it. Sometimes when you’re so far away from an audience on stage it’s hard to look anyone in the eyes or have any sort of connection. I don’t know if this is going to make sense to anyone, I was up there just litearlly not feeling it. And I was just like, “I need to get fucked up right now! I need someone to fuck me up!” I need to get that point where I can just fucking let go and do my thing on the decks and vibe with the crowd.

So I get on the mic and I say to the crowd, “I just want you guys to fuck me up! … On a spiritual level!” I didn’t know how else to say it, those words just came out of my mouth and the whole crowd just responded. And then we were all on the same wavelength. That’s how it all started.

Then at EDC Orlando, I think because I was so far away, it just entered my mind again and we all, again, responded to each other.

I don’t know if anyone who’s reading this has ever been on a stage at a festival that’s so far away from the crowd that you need to feel it. It’s a crazy disconnect if you can’t.

Honestly, I have time for anyone that’s gonna give my music or my shows the time of day. I respect anyone who gives me respect. There’s no hierarchy at a show, there shouldn’t be. I really genuinely believe that. Earlier in this interview I said I’m a massive fan of going to shows, I love artists, I’m a fan girl of people. I want to feel like what they’re doing is legitimate. For me, connecting with fans at my shows, it gets personal for me. It adds another level to what I do.

Final question, I’m here to see your new visual set up for the tour. What kind of work has gone into that, what artists have you worked with, what engineers, to kind of bring your vision to life?

You’re only seeing the visual aspect of it today – there is so much more to it that we haven’t even shown anyone yet. This is just one part of what you’re going to see. I wanted to create something visually that was more interactive, that I could use in between what I usually do with my visuals, that being the GoPros that are over my hands and projected behind me.

We’re working with Virgil [Abloh], who does Kanye West’s stage design, which we have yet to show anyone. And the visuals we’re working with Microsoft. So I was approached by them to work on a new project and I couldn’t say no. Technology is moving so quickly that it’s important for me to remain open minded and move with it, especially in electronic music. For electronic musicians, you don’t have much on stage. So to have visuals pushing the sonics is a super dope thing.