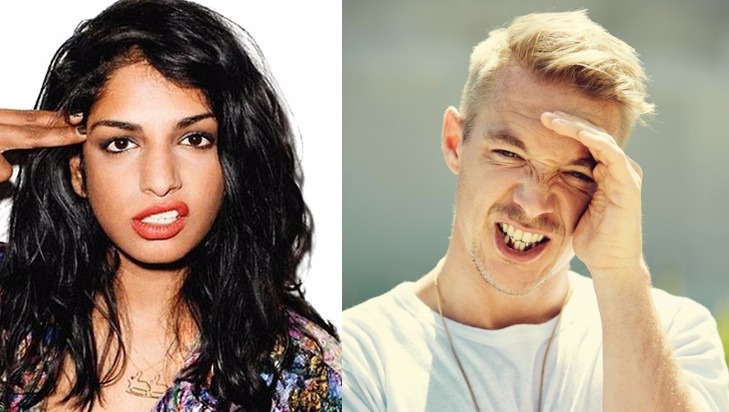 M.I.A. Speaks Out Against “Paper Planes” Collaborator Diplo, Says She Actually Discovered Him

M.I.A. wants to clear up one thing — Diplo didn’t discover her. According to her side of the story, she actually discovered him.

The two are not seeing eye-to-eye about their first meeting, which sparked the making of  “Paper Planes,” one of the most iconic songs of all time (and many other heaters). In a fumed social media post the singer goes into details of their professional and personal relationship, and it gets a quite ugly. M.I.A. claims Diplo’s own label Mad Decent was spreading racist memes, he was cheating on her, and he even had a dartboard of her face on his rider.

But, she says she gave in: “To this day so many people have made careers off me and the same people distort history destroy the story because of my politics,” M.I.A. says. “I let [Diplo] cash in on the sound because I had no choice. I felt it was important to defend freedom of speech, even for American people and couldn’t play the game.”

She claims this lengthy post is just 1% of the story, and the main takeaway is this: “It’s important you don’t see me as a lil thing Diplo discovered because I’m a brown woman, and this is the first story of a brown female musician who smashed it for the first time. That didn’t happen because I accidentally walked passed Diplo.”

Diplo quickly responded: “not sure where your grudge comes from I’m thankful for you believing in me. I wouldn’t have taken music seriously if it wasn’t for you.”

I just want to clear this up Here's a lil story of how this happened. I discovered diplo because Steve Mackey played me a song by him released on big dada! I found out on a "flyer" he was djing and spent 16 pounds and bought my own way into fabric club in London . No one put me on the list! Nobody paid for it! I approached him and gave him my record! There was no label no A N R no channels. a handful of people believed in me , then when I got a deal , they turned on me. This was why i forged my own path and style and genre. I didn't want anyone to say they made me! To this day so many people have made careers off me and the same people distort history destroy the story because of my politics , which he played a part in cementing. He said "politics is a terrible thing for music"in 2010 in the NYT article . During this time when 400 000 Tamil were getting bombed to death , he used to have a dart board of my face on his rider . Jus sayin . "He text me "you're walking backwards into a brick wall" when the NYT article came out. While I was defending privacy laws with a newborn baby like it's me against the world. No one came to my shows during this time because of that article and racist memes mad decent were spreading through hipsters. I let him cash in on the sound because I had no choice. I felt it was important to defend freedom of speech, even for American people and couldn't play the game. Everyone involved in major lazer now came together through me. I made boyz in Jamaica and Trinidad. I took switch there carried beers up the mountain everyday . Wes wasn't there because he was cheating on me in Brazil at the time. he turned up a year later and networked in JA saying he produced BOYZ coz the song blew in Jamaica. Walshy was the directors roommate and Chris was my day to day in Trinidad. it's important you don't see me as a Iil thing diplo discovered because I'm a brown woman , and this is the first story of a brown female musician who smashed it for the first time . That didn't happen because I accidentally walked passed diplo. Ta! This is literally 1% of the story!