An unprecedented international collaboration between 13 of the world’s leading transformational festivals, Oregon Eclipse was easily the standout event of the year, if not the decade. Now dubbed Global Eclipse Gathering (GEG), this newly created consortium of producers and event creators share a common vision in bringing people together to witness amazing natural phenomena, and with resounding success, Oregon Eclipse was their first official production.

It’s been a long journey to get to this point, the initial concept for Oregon Eclipse being crafted more than 10 years ago by Bosque HrBek and Kevin KoChen in 2006. After years of searching, the event found a home at Big Summit Prairie in 2013, and work could finally begin to bring their vision to fruition. From water wells to subterranean infrastructure, Symbiosis invested heavily in the land’s permanent fixtures, all the while respecting the sacred land of first nations. This respect became a cornerstone of the entire gathering, resulting in receiving permission from these first nations to host the event and ultimately following their leadership for the eclipse ceremony itself. 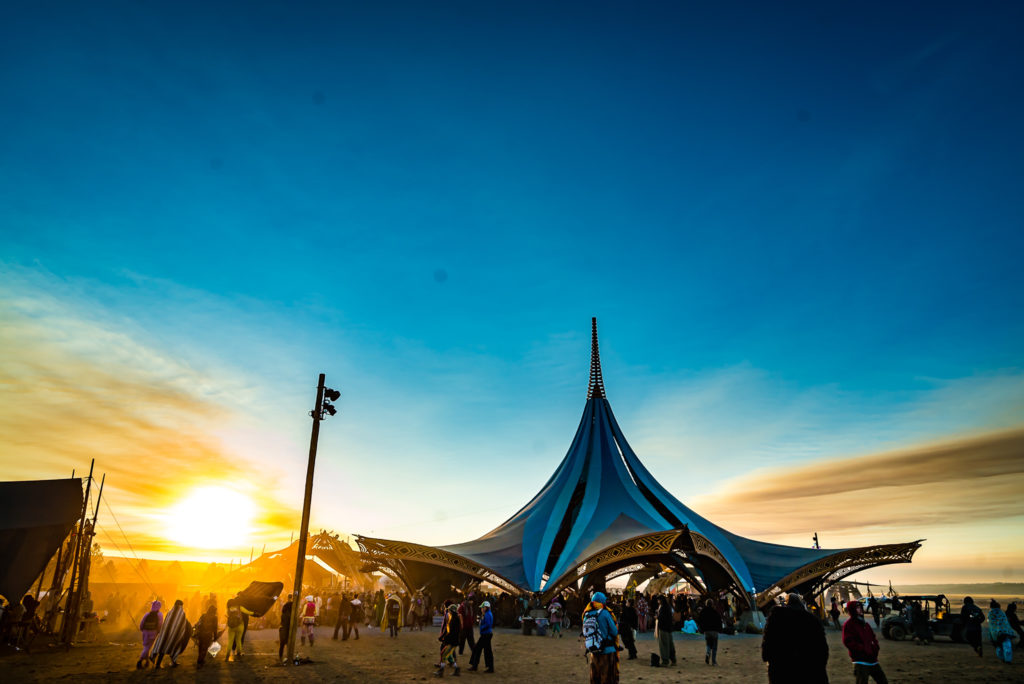 Speaking of the land, there simply could not have been a better venue than the Ochoco National Forest’s Big Summit Prairie: a 55,000-acre private ranch nestled in the majesty of Oregon’s gorgeous landscape with a 52-acre lake and a 16-mile buffer from the nearest neighbor. Add 30,000 attendees, and you’ve got one thunderous celebration of life and unity.

An impeccable venue with space enough for the 30,000 attendees plus staff, the grounds were absolutely huge, and the campgrounds became a veritable city not unlike Burning Man. Depending on radical self-reliance, pack-it-in-pack-it-out tenets, and overwhelming participation, the gathering was untouched by cellular service and outside communication. While that might sound a bit scary, it was easily one of the most appreciable aspects of the event. Without distractions from the outside world, all attention was focused on the stimulus present, servicing a rich feedback loop from one interaction to the next. 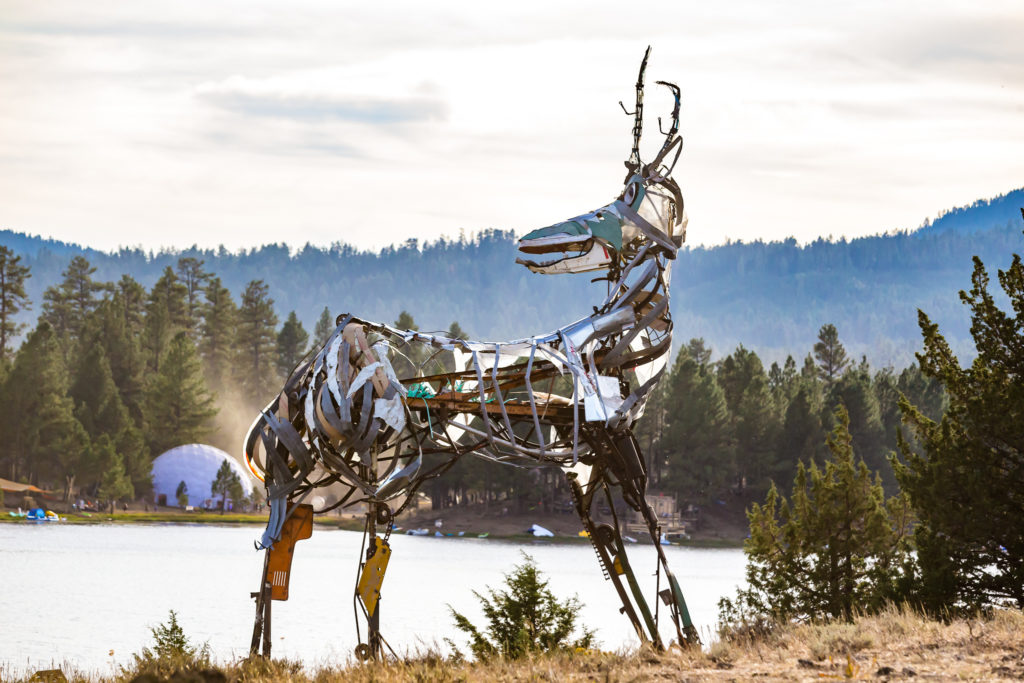 Everything from the musical talent, to the smorgasbord of workshops, installations and interactive environments were meticulously curated and methodically placed according to the event’s rich concept.

For example, the main event had to have a location on the venue and deserved a structure to honor the eclipse. Instead of constructing something to close off viewers from the heavens, organizers erected an open-air Solar Temple, inviting a large gathering within a space sided by towering platforms, offering an unobstructed view of the celestial display. The wood used in the Solar Temple’s construction was all reclaimed from the venue’s own downed trees, and the structure is now a permanent installation on Big Summit Prairie. 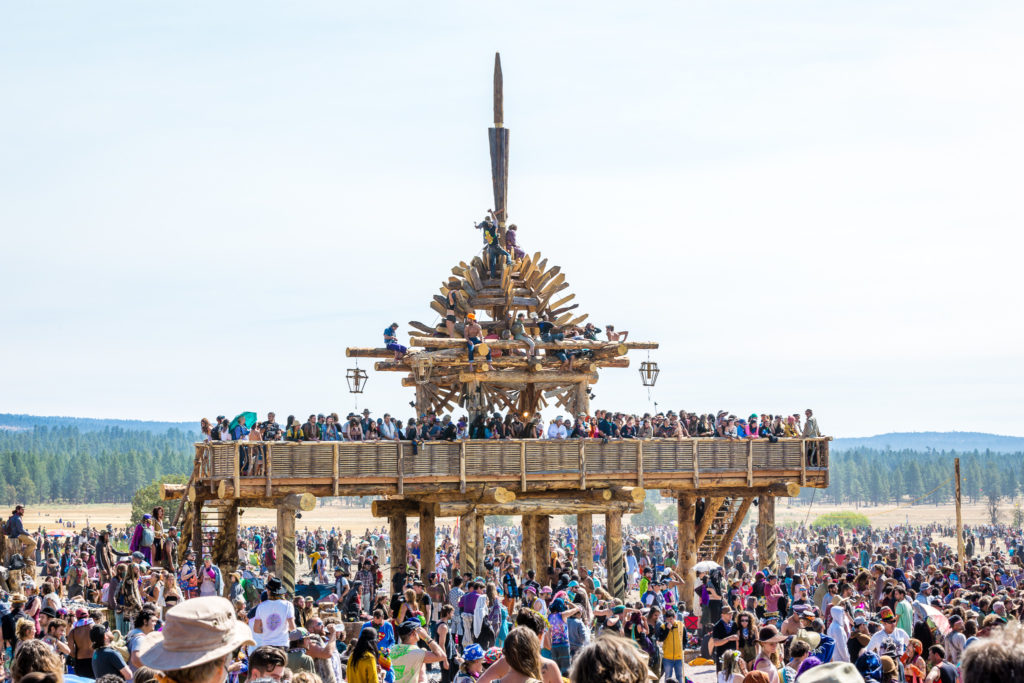 The Eclipse, Sun, Earth, Moon, Sky, Big Top, and Silk Road stages were all aptly themed, hosting music from cultures around the world, from conscious bass, psytrance, classic house, live ensembles, overhead Earth harps, impromptu om circles, and more. The musical curation was second to none, though the scale of the event’s offerings certainly shadowed the world-class music. Families were welcome with open arms, and just as those of age could find their own captivating engagements, so too did children have safe spaces and activities to explore.

And as previously stated, participation is what truly elevated the event from a mere festival to a gathering for the ages. Even the event’s staff couldn’t have imagined how their stages would evolve through attendees’ active participation. At one point, the Silk Road legitimately became a shaded merchant alley as people brought their wares to display, trade, and sell as the music continued. Daily beachside boogies, naked mud parties, edible gardenscapes, sound immersion, tea parties, public bathhouses and more were all made possible through participants. Hell, a freaking DeLorean cruised on top of the lake! 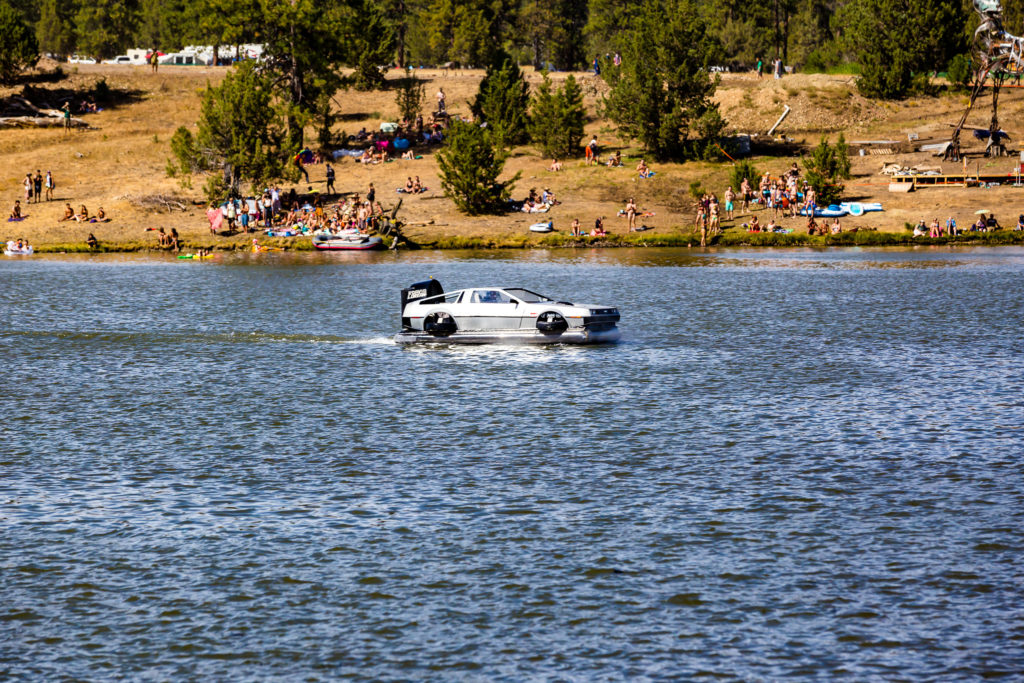 And the eclipse itself… Oh, was it everything and more. Despite fears of haze due to the surrounding forest fires, Monday the 21st was angelically clear. Tens of thousands made the journey to the Solar Temple atop the lake to watch the celestial event, and it did not disappoint. One Nation tribes led a ceremony to prepare for the eclipse, dousing the crowd with words of intention to encourage experiencing the full gravity of the occurrence. Temperature dropped markedly, animals roamed in confusion, and light took on the strangest shade of neither dusk nor dawn before a wall of shadow consumed the landscape, leaving a hollow circlet of sun to reign above. Surrounded by loved ones, the howls of thousands, and the unwavering presence of something greater than ourselves, we wept. Nothing can prepare you for the Moon overtaking the Sun and leaving a sliver of light to crown the sky. Nothing can imitate the full body experience of temperature dropping so quickly, of day turning to night in seconds, of seeing the Sun and stars in the same frame.

All happenings were halted during the eclipse, focusing the gathering’s collective attention on the celestial alignment. However, after totality had come and gone, you better believe the party was on. Shpongle took over the Eclipse stage immediately following the impressive display, topped off with Alex and Allyson Grey live painting the eclipse on stage. Perhaps the headiest display of all time, but an unprecedented collaboration of legends to say the least. 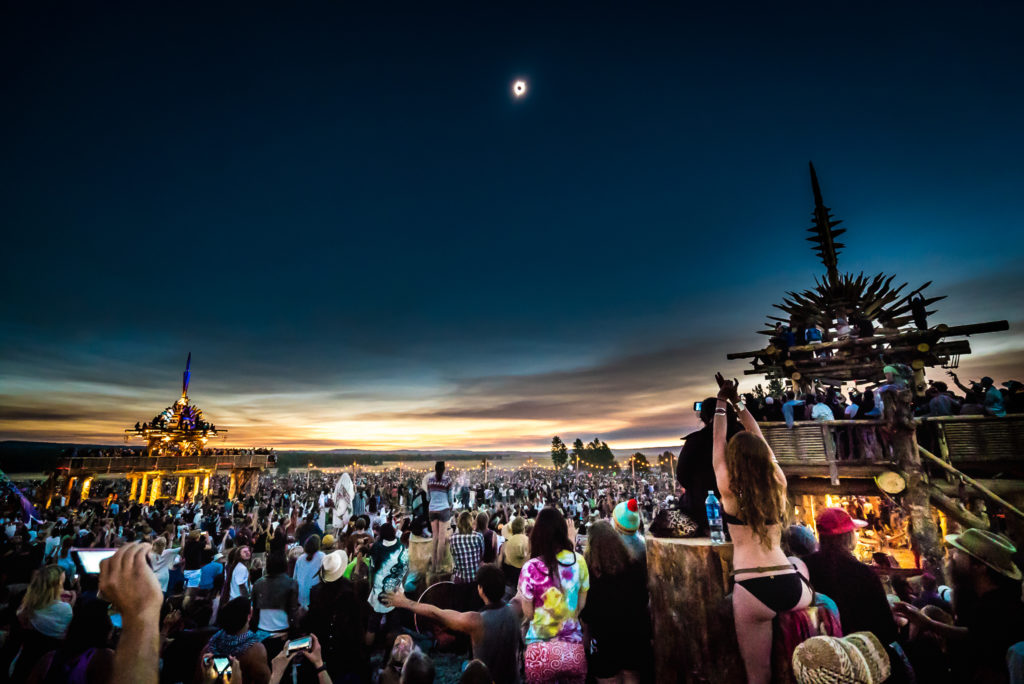 As with any event, there were a few gripes to be had, but the only true issues of the entire gathering were the water refill stations and the ingress operations. For such a vital resource, there was a painful lack of signage denoting the water refill locations, and by “lack” I mean none at all. Word of mouth or accidentally stumbling upon one became the best chance for locating one of these mythical spigots.

Additionally, stories of 8 hour wait times were not unheard of for entering the festival, and I’d been recounted a few horror stories well above even that amount. For a once-in-a-lifetime event such as this, in a new venue with a two-way road as the only entrance… Understandable, though that doesn’t make it easily stomached. Exiting the festival was much easier, though that depended greatly on the chosen date of departure. The rigors of getting to the event were serious to say the least, but once finally posted up at Big Summit Prairie, no one was complaining.

Security gates were not obtrusive at all, which made for easy travels and zero waiting when heading to a show or workshop. In retrospect, this was perhaps the most important and overlooked aspect of this event: space. The festival grounds were an absolute dream of space to do whatever your heart desired. Sure, the Eclipse stage saw its fair share of crowds for acts like Bassnectar, Shpongle, The Glitch Mob, CocoRosie and others, but there was always room to groove. The other stages were perfectly sized with intelligent placement to allow dancing and congregating without congesting prime real estate, and when walking about from one location to another, there was zero difficulty to speak of. Just about the only lines were for the bathrooms, which were all compostable bio-filter units from Ecozoic placed conveniently in key locations. Event planning is one of those things that, when done well, melts into the background to be forgotten. I highly doubt anyone was considering how they would have changed the layout or improved upon the experience. 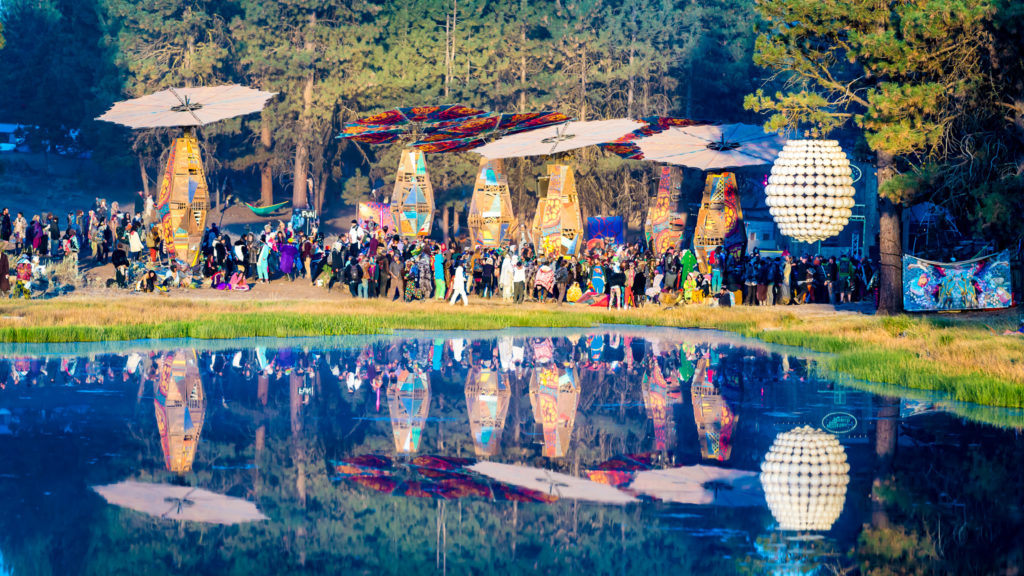 All in all, Oregon Eclipse was like nothing else I’ve ever experienced in all my years of life. The expansive array of environments and opportunities to explore, the population of global community, the thirst for participation, art and music from every corner of the Earth, and the elevated purpose to celebrate something so much larger than ourselves… I truly left feeling replenished and revived as a human, and I’m confident all those who participated will tell you the same.

If you missed out, don’t fret. Global Eclipse Gathering is already planning the Patagonia Eclipse in 2020. We’ll see you there.