Your EDM Interview: Rebel ACA and the French Monkey Wrench Weird It Up Before the Release of ‘Sunday’s Cool’ [Video]

When UK funk/hip hop duo Rebel ACA and the French Monkey Wrench finally release their debut LP Sunday’s Cool on June 22, it’ll likely be a pretty big deal. Not only has their label Buttercuts Recordings recently released the new Dr. Octagon stuff, but this unconventional two-man funk group have built an interesting narrative (to say the least) about their origins. They’ve also released two videos which, stylistically, seem diametrically opposed to each other.

Preferring to wear masks rather than reveal their true identities a’la Banksy or Daft Punk, “The Wolf” and “The Bear” are just about as strange to interview as their personae and back story would lead one to expect. They switch between first and third person, get dreamy a lot, have a clever explanation for almost everything, and do not distinguish as to who’s talking. That said, they are still marvelously entertaining, just like their unique blend of hip hop, funk and indie vocals. This is where all those genres meet, as some strange apex point of Beck, Gorillaz and DJ Shadow. Strap in: this is Rebel ACA and the French Monkey Wrench.

You guys have a great story in terms of how you came together, but musically how did it happen?

Effectively we would meet up to write music – originally on Sundays, hence Sunday School – “Sunday’s Cool” for our album as it was the only day we both had free. Always at French’s flat where he has an absurd amount of musical instruments packed into a tiny space, hence the “sleeping under a harpsichord” story being real (click here for that story on Soundcloud).

French has a deep love of that 70’s French soundtrack sound and Rebel has a love of hip hop and we would find a middle ground where Rebel, mostly far too hung over from some sort of chasing the night away on Saturday, would lie on French’s bed, as there was no chair for him, and try not to fall asleep as French would loop up a beat getting slowly excited. Rebel would occasionally have a crack playing some instrument, but mostly was there to guide French. Once French had Rebel awake, paying full attention, pen out and head nodding, he knew he was getting somewhere…

Why the personas? Is there an art element to it?

Call it anti-selfie. Call it shame. Call it we’re too ugly for you to want to see our faces. Call it we aren’t who we are, we are what the music says we are. Call it anonymity makes you use your ears not your eyes.

We have made music and an album or two before and not promoted it or released it because we just can’t cope with trying to say, “hey hey over here! Look at us, love us please.” It’s one of the biggest obstacles we had, that we have to give press shots, that we have to smile and wave.

In this visual and visceral world we all live in now, everyone records everything, and some are so comfortable with their image through their camera lens, but we aren’t. Not even a bit. And no problem if you are. Who really knows what is the right way to be. But we choose to get a couple of masks of a bear and a wolf, as if you knew us, that would make sense. And if you don’t, hopefully it is nonsense that also makes sense. 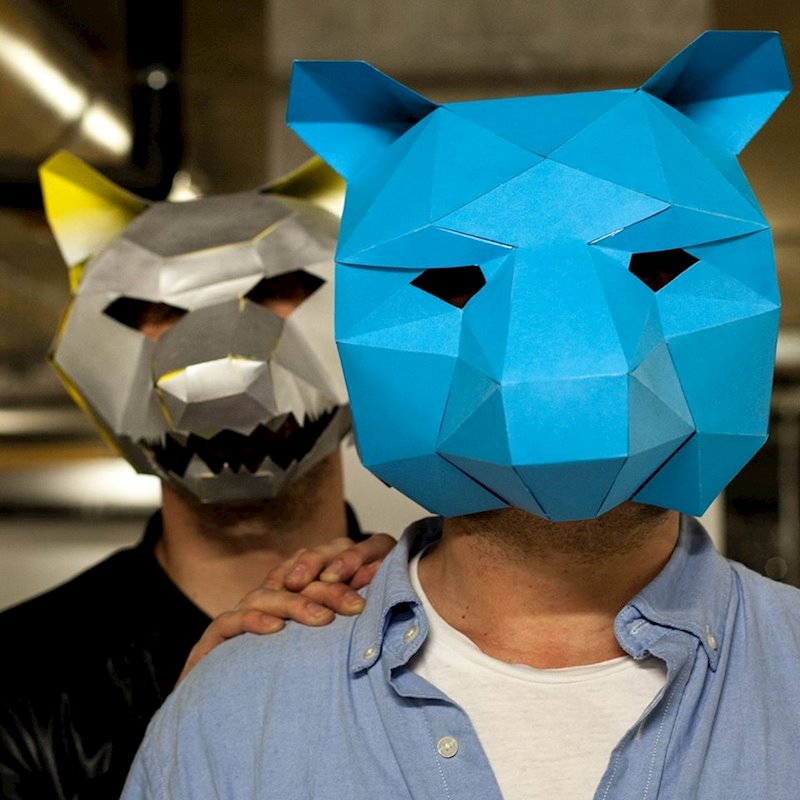 To that end, how did you develop the aesthetic you have currently?

Thanks to a few chats with an old friend who has done Buttercuts Records design since day dot in 2000 and what? Nils Davey graphic designer supremo. But the real point is that we could be anyone.

We don’t want our listeners to feel ostracized or influenced by who we are or what we look like, and to truly do our job of expression we need to be anyone. So whether we are good looking models, or old fat men, we are The Bear and The Wolf. And that’s what’s going on. We got all sorts of people to wear the masks for our artwork, from strippers to hard hitters.

What interests you about having a sort of different, artsy vibe?

Well that’s nice to hear, but it just is what it is. We are what we are. We’re just two very close friends, who are very different in almost every way, but somehow, for some reason the universe bought together and while neither of us thinks we are any good, the other likes what we do so we choose to try and do it together to cheer each other up

A lot of the music is based on jazz and funk, really a fun 60s vibe but also experimental. How did you smash all that funk in there and still make it rappable?

It’s exactly where our tastes meet. Both of us love that exact spot of music and we slowly over the years have worked out where exactly that spot is, while we got progressively better at our crafts as best we could.

Aside from funk and jazz, what are some of your major influences musically and artistically?

Tough question. We all stand so much on the shoulders of giants. How do explain the ground you stand on, when all we can see is the view? But sure, here goes. I guess we should try and focus on where we overlap as that is our combined influence.

French isn’t a hip hop nut, but he has huge respect for the production of those that drove the art form. He began the partnership with Rebel many moons ago as he wanted him to scratch on these beats he was writing. And he loves hip hop when it’s so clear sonically, but it needs to be playful too. It upsets him when it’s so aggressive. Also of course he likes a lot of French acts you would have never heard of but top of the pile Serge Gainsborough, and that ’70s soundtrack sound and vibe. To French, it’s not just about the song, it’s about the sound. You see him at his most excited when he finds a snare sound he really likes. He starts dancing ’round the room making noise, like, well like a French man eating his favorite cheese.

Rebel loves all that and is just a bit more into words rather than sounds. His original love was ’60s and ’70s rock and blues and then a tape from a mate of Wu Tang and Beastie Boys moved him to hip hop. His favorites are TaskForce, Chester P, Rodney P, Sage Francis, Sole, Big Pun, Big L and yes, he’s going to admit it – don’t know why more don’t – the unbelievable EMINEM. His other loves are Soul music, all of it basically. There has never been greater music that makes you feel like that, and it was great to hear Charles Barkley rip-rocking some of that flow recently.

And if they had to vote for their two favorite possible artists?

Leonard Cohen, who French introduced Rebel to and still claims is the greatest ever songwriter, a debate we often choose to have still to this day. Rebel thinks it’s a silly question, and surely Hendrix deserves a shout.

What are some main ideas you want to get across with Sunday’s Cool, either musically or with your lyrics?

We’re just trying to say something other than “I’m tough. I’m scary, we’re from the street, grrr be scared of me and my lyrical wizardry.” Don’t get us wrong, if rock is about making people feel rebellious, hip hop is about making you feel tough. There is nothing like hearing Biggie Smalls to tell you how small other peoples balls are. But Rebel isn’t tough, isn’t from the street, isn’t scary, except near glassware. Nor is French so well, tricky to rap tough, when you aren’t. Plus French won’t let Rebel swear, which is so annoying. So we’re just trying to talk about a subject, you know, our relationship with this world and the universe.

“Marble” is about our relationship with women. “Swingaboo” about immigration vs the robots taking over. “John Wayne” about our relationship with technology and the modern world. “Living in a Mad World” is about a young girl who is having a really tough time with a mad dad and social services, and just to try and make her feel good and important and valued. “African James Bond” about a best friend who got depressed. And on that cheery bombshell, next question!

How did you decide to go from a sort of Dadaist aesthetic on the “John Wayne” video to the film noir style in “Marble?”

“John Wayne” lent itself to just simple graphic representation, and Nils Davey made “John Wayne” as his first ever animation video thinking it would be easy of course, and we think it broke him! And then when we said “okay, loved it, can you make another a little bit quicker,” we agreed it needed to be dark and film noir. All shadows. He was like, “okay f*** animation. I’m gonna do something sick in the streets of LA with film.”

The “Sexy Plum” interludes seem to divide the album into three sections. Was this done thematically?

Yes for sure. Thanks for listening as a whole album! But yes, for exactly that reason. Who has the attention span these days for a whole album? So we put in some breaks so you can breathe and we both love interludes and instrumental breaks. It’s supposed to be like a dream sequence. A lullaby if you like, and not so subtly subconsciously suggesting, “maybe you should have a break to get in the mood for the next few songs?” But hell. Use it as a toilet break if you ever actually sit down to listen to the album in one go.

Who, if any, were the guest performers on this album?

Usually there are lots of guests. We are so blessed with the amazing musicians around us in London. But on this album there are very few features. French plays almost everything except a couple of bits of piano by Rebel. “Living In a Mad World” was remixed by Lil Rossco, Rebel’s Australian brother from another mother, and features Tracy and her Niece. The chap we wrote “African James Bond” about – co-wrote the lyrics to “John Wayne” sitting in Rebel’s garden. But that’s about it.

How many more videos will you have out before the album drops? Any hints on what kind of weirdness we can expect?

Do you plan to tour on Sunday’s Cool? Any plans to come to the states?

French went and selfishly had a baby girl a few months back, which Rebel is very unimpressed with and generally grumbling about. So currently Rebel is out doing the occasional show to cut his teeth and warm up. The truth is that releasing this album properly with the support of a label and promotion is so that we can perform. We want to embrace making music and performing music. They are entirely different skills, and Rebel really believes to be a true artist and love the art form you can’t just do one. You need to do both. So we would LOVE to come to the States and will be doing so, the moment French can dump his baby on his girlfriend and get his suitcase out.