by Your EDM Staff
in Tech

Earlier in the year Spotify filed its IPO to become a public company and as a part of their new-found fiduciary responsibility to shareholders, they’ve shared their first ever public earnings report. Here’s a few more things we learned about the report as well which you can read in full here. 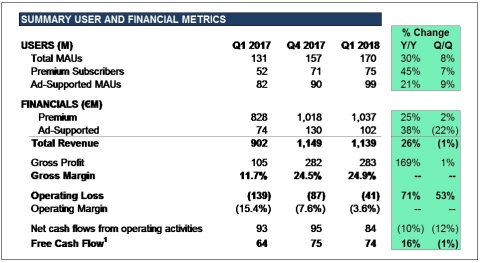 Spotify is now available in 65 countries and territories

Though Spotify lacks far-behind Apple Music in the international availability department, they’ve made positive strides opening up in Israel, Romania, South Africa (a continental first), and Vietnam in 2018 Q1.

Spotify is expanding on its Hulu bundle partnership

Last September, Spotify and Hulu teamed up to launch a joint-premium account bundle available to those on student plans. Last month, they expanded on it to include regular premium users to include an added Hulu Premium account for $12.99 a month. If you’re not a subscriber to either and this deal looks like something you’ll be interested in it’ll be available to new customers this summer.

Spotify will continue to expand on its podcast department

Per their IPO filings, Spotify stated that the would be expanding into video and podcasts in particular. Last quarter, they “entered into partnerships with several major podcast networks and aggregators which more than doubled the size of our catalog compared to Q4 2017.” Expect the catalog to keep growing through the rest of the year.

Per the report, here are their full 2018 goals which have remained unchanged through Q1.