Dua Lipa Claims To Be “First Ever Int’l Female Artist” To Play Tomorrowland, But She’s Not Even Close To Right

Festivals all over the world have been making a concerted effort to bring more female talent to their lineups in the past couple of years, resulting in the rise of some seriously powerful new artists. Even in a scene like electronic dance music, where women are categorically underrepresented, festivals like EDC, Tomorrowland, Ultra, and more have been booking more talented women.

However, it’s also the responsibility of women to hold other women accountable, and that’s just what’s happening now as Dua Lipa has made the verifiably false claim that she was the “first ever international female artist” to play Tomorrowland this past weekend.

According to someone on Twitter who was allegedly at the festival, she first said on stage she was the first “pop star” to play, which may or may not be true depending on how you classify The Chainsmokers or David Guetta. But to go from “first pop star” to “first ever international female artist” is quite the leap. 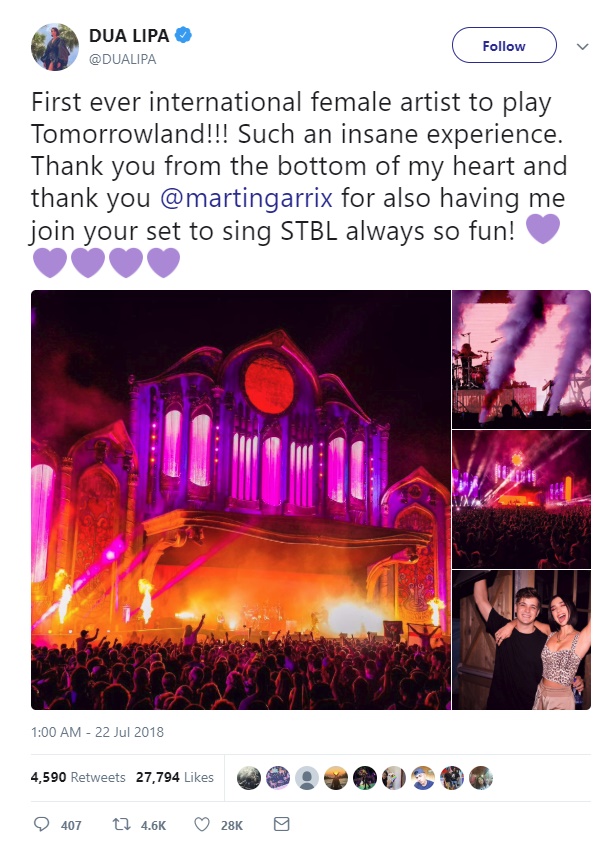 Plenty of people on Twitter responded, calling her out for her easily disprovable claim. The tweet has since been deleted, but Dua Lipa has still not commented on the matter (which was likely the fault of her social media manager, in any case).

that’s straight up not true… and extremely disrespectful to the women who did it before you. it would be nice if you could enjoy the moment without lying to make yourself feel more important

Ummm. You literally werent even the first female artist to play at tomorrowland that day 😂

In Dua Lipa’s defense, her Instagram post for Tomorrowland has a different caption, saying “singer” rather than “artist,” which is actually true. While other vocalists like VASSY, Emma Hewitt, Nadia Ali, or Alana Watson have performed at Tomorrowland, they were not billed artists.

New: deadmau5, Skream, Virtual Self, The Prodigy + More – Your EDM | Week In Music

New: deadmau5, Skream, Virtual Self, The Prodigy + More - Your EDM | Week In Music