Your EDM Interview: Get to Know Mob Tactics and Their Wacky Brand of ‘Dinosaur Rock’

The UK duo of Mob Tactics are a great example of two great DnB tastes that taste great together. While both Luke Bugden and Mark Sims were producing beats before they hooked up and started working together in 2010, that collab shot them to the upper echelons of drum and bass and neither the boys nor the scene have looked back since.

With a neurofunky (emphasis on the funky) style that’s diverse enough to have seen Mob Tactics (MT) release on the likes of Viper, Eatbrain and Playaz, Budgen and Sims are also known for the undeniable sense of fun in their work. Their latest EP on Eatbrain Dinosaur Rock is no exception, as is evidenced by the title and Godzilla-esque album art. That said, in drum and bass an artist cannot survive on cheek alone, and Mob Tactics have definitely proven time and again the real reason for their spot at the top. Dinosaur Rock is no exception.

While the funny vocal samples and jaunty beats and synths are there in spades on this release, Dinosaur Rock is also extremely sophisticated and interesting in its sound design, especially in the title track. Given all this and the fact that MT will not be slowing down any time soon, Your EDM sat down with Bugden and Sims, and they are just as fun and complex as their music indicates.

For those who are just learning about MT, give us a little background on how you two came to work together.

Luke: I was trekking through the Himalayas when I stumbled upon a little hut which turned out to be a male sauna. I entered the changing room and realized I had no towel. From across the room  a man with the most incredible chest hair caught my eye and uttered: “Hi, my name Is Mark, but you can call me Long Dong Silver…wanna borrow my towel?” The rest is history as they say.

Luke: Nah, we actually met through a mutual friend, Jamie from Kaiju, when I was working at Chemical Records. One look at his lovely little Bieber face and I knew we’d be besties.

How do you put together your productions, especially now that you’re not on the same continent? Is it completely collaborative, or does one of you mainly do, say, basslines and the other drums, etc?

Mark: We’ve always written when we’re both in the same room, it’s just always worked best for us like that. Even when we had one home set-up each and our main Mob Tactics HQ studio, we always found the magic occurred when we we’re both working together.

Luke: Yeah, we were unsure how it would work with me being away for long periods of time in the States, but it’s actually enhanced our workflow! We just have the one main studio that we built last year now, so there’s no home set-ups anymore. I get back every few months to the UK and we just go hell-for-leather in the studio for two weeks, a week off, then another two weeks writing, and I’d say we’ve easily written our best material to date this way. We manage to do the odd remix via Skype together and we do the Mobcast this way, but as for writing new material from scratch, we need to be in the same space and in each others face.

What kind of stuff were you each doing before working together?

Luke: We started working together mid-2010. Prior to linking up with Mark I’d been working on-and-off under another production name, Poison; I know, cringe! I was doing stuff with Dylan, Audio and a few other folks, but I had kind of eased back on pushing myself and getting into my studio enough, mainly due to already having a full-time job in the music industry that took up every last bit of time and energy I had, not to mention the long commute there and back each day. I’d come back from work so tired, fire up the PC and just stare blankly at the screen and weekends alone just weren’t enough time to take it seriously. But the chemistry between Mark and I just reignited my hunger for it, so I got sucked back in if you like; it’s a hard habit to break!

Mark: I had been producing under the name The Funktion, and had had a few releases here and there and I had just started working with RUN DNB which was the label Luke was running at Chemical. For the first year of Mob Tactics I was still doing stuff under that moniker, but I lost all interest in to be fair! (laughs) The stuff Luke and I were doing together was just more exciting to me and we really started to get focused, work hard to push our sound.

How did you start working with Eatbrain?

Mark: Jade was one of the first people who really picked up on us. He was supporting our stuff early on and there was a dialogue from pretty much the start. To be honest, I dont remember the exact chain of events that led to us signing material to Eatbrain, but I’m certainly glad we did!

Luke: Yeah, not only is Jade one of the nicest guys you could ever hope to meet, he also runs an awesome label and we’re so very proud to have had the opportunity to release with them. They’re so professional and accommodating and they really do care about the artist and pushing things in every way possible. Good people!

How did the concept of Dinosaur Rock come about?

Luke: It was never really a concept if we’re honest. It was just a cool name we had for the track that spawned it. We often name our tracks early on in the writing process as we feel it gives them a character and generally helps to stop you getting waylaid and losing the workflow and direction.

Mark: We have a massive list of track names and this was one we’d wanted to use for ages. Don’t ask us what it means, ‘cause we’ve no idea.

Was there a musical sound you were trying to achieve that related back to the theme of the EP?

Mark: Not really. Jade had expressed how much he loved “Dinosaur Rock” (the single) and we were already working on a bunch of new stuff at the time, so we just carried on writing stuff with an EP in mind, but not really a theme so much. We actually wrote “Brainwash” really close to the deadline for submission and we nearly didn’t include it as we thought it would be too “jump-up” if you like, but Jade really liked it! We were happy that it made it to the EP. 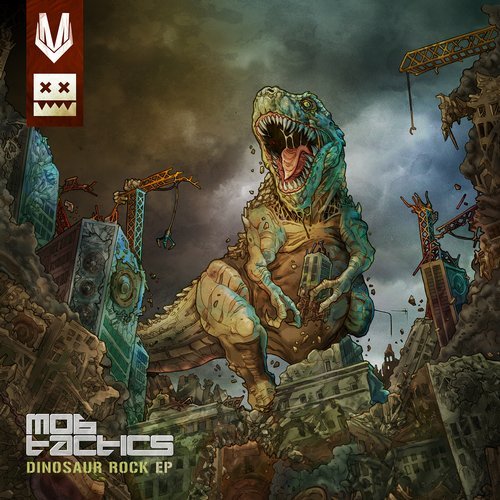 It’s been talked about a lot, and MT are now known for weaving a good bit of humor into your music in almost all ways possible: vocal samples, release themes, even the way the music flows. How do you keep coming up with the cheeky ideas? How do you think you manage to imbibe humor into the actual beats and song structure you use?

Luke: Well, the humor side of things is important to us. Part of the reason Mark and I write so well together is that we share the same sense of humor and we never take ourselves too seriously. Our studio sessions, at least until Mark fucks up the Gin & Tonics, are great fun. We’re constantly taking the piss out of each other and try to enjoy the process as much as possible.

Mark: Music should be fun, so we always try to come up with interesting track names and do edits that will bring about a smile to even the most jaded of drum and bass heads! (laughs) That said, it’s not that we don’t take the writing process seriously, we just try to enjoy it; doing this for a living is a privilege and we’re gonna make sure we try to enjoy ourselves every step of the way.

Speaking of song structure, the EP’s title track is completely different not only in terms of DnB but also in terms of MT. How did you come up with the composition and sound design for that track? What was the impetus and how did it get put together?

Luke: The track is definitely one of our more different tracks if you like. In terms of arrangement it’s pretty standard, but it definitely has a slightly weird rhythm overall, which is probably why it’s such a bitch to mix! (laughs) The main body of the track came together pretty fast, but the deeper down the rabbit hole we got with it, the more detailed it became, and, ultimately, the longer it took to finish.

Were there any new techniques or samples you guys found that were fun and contributed to the sound of Dinosaur Rock?

Mark: The bass is actually partly built with Luke’s voice trying to emulate dinosaur sounds which we then processed and built into our main bass. I was watching a dinosaur documentary and heard this guy talking and thought it sounded really cool so I laced it over the breakdown. Wasn’t sure if Luke was gonna love it or hate it, but he lost his shit! (laughs) Yeah, we’re really happy with this one.

Luke: Yeah, we spent a long time getting all those basses playing nicely together and the track was pretty much done when Mark found that vocal for the breakdown and I was just like, “oh hell yeah!” Was the icing on the cake if you like.

What’s up next for you in terms of releases that you can talk about?

Mark: We’ve just signed a few new singles, but you’ll just have to wait and see on that front!

Luke: Yep, first one is dropping soon though, so keep ’em peeled!

The Dinosaur Rock EP by Mob Tactics is out now on Eatbrain. It can be streamed on Soundcloud or purchased on Beatport.