Your EDM Interview: Cyantific Adds Some 80s Fun to The DnB ‘Bloodline’

Cyantific has always been pushing boundaries in drum and bass, and with the release of his newest album Bloodline, those boundaries could not have been stretched in a more beautiful way. With catchy and addictive 80s style synths, the scene went nuts when Bloodline dropped on July 20, and it was for good reason. Haunting melodies, fun, Tron-style synth beats and hard drum and bass all merged in this album, proving that Cyantific can pretty much play around with any other genre and push the limits of DnB and it will still end up both technically tight and highly danceable.

With Bloodline and almost all of his other releases, there seems to be a special, unmarkable element to his tracks which make them extra fun and extra clean. To use a tired phrase: a certain je ne sais quoi. When Your EDM sat down with Cyantific in search of this special something, it turns out even he doesn’t quite know what it is. From his perspective, he just likes to play around with different sounds and has a penchant for the 80s. While we learned a lot about this Viper darling’s style and process, we may never be able to pinpoint what exactly it is. It’s not technical, it’s not compositional, it’s just Cyantific.

You’ve been releasing a lot of stuff with Viper over the past few years. Why do you think they’re a good home for you and your sound?

I feel like Brendan (Futurebound) has been supporting my music long before I signed, so that is a massive factor. You want someone at the head of the label who is fully behind what you do. Musically I think it’s a great fit too. Brendan and I often talk about the need for more melody on the dancefloor, so we have a common goal.

It seems that Bloodline, along with your other album, has a very clear conceptual bent. Do you like for your tracks and releases to tell a story or have a certain theme?

Completely. I knew I was starting on the album 3 years ago, so everything I made since then has been written with that in mind. All the singles were up for consideration, so every sound in every tune had that theme running through it.

Despite the clear theme here, the tracks on Bloodline are all over the board style-wise, from darker, techy DnB to liquid to stuff that isn’t even bass music like “Labyrinth”. Why did you want to put so much diversity into the album?

I like albums that have a bit of diversity, I always have done. An hour of straight up DnB in the same vein would get a bit much for me as a listener, so I had to throw a couple of curve balls! I think it all ties together despite wandering off the path a bit. Plus when you’re writing you’re always experimenting and, sometimes those ideas are too good to throw away. 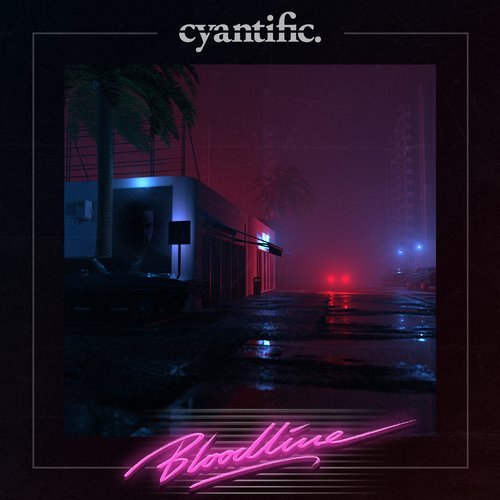 There seems to be a clear homage to the 80s on this album. What interests you about merging some of those original synth sounds with modern DnB and bass music techniques?

It’s the decade I was born in, and I grew up on the music from then. I think it was a really interesting time for music because of the level of experimentation going on. You listen back to even some of the big pop records and there’s some really weird shit in there, I love it! I tried marrying the sounds from the 80s with DnB back in 2003 and didn’t expect it to work, but it did, rather well. I kind of get a kick out of making a dancefloor tune with slightly camp 80s references in it because why not? DnB doesn’t need to be super serious all the time.

How did the collab with DC Breaks on “More Than Human” come about?

We’d been talking about making something for ages, I sent them a few ideas and they flung back something totally different using my parts. It was great hearing what they’d done. I went back in on it, and here we are.

Speaking of collabs, you had a lot of diversity in your vocalists this time around as well. What kind of sounds were you looking for on vox in those tracks and how did you choose the vocalists you did?

I definitely have a sound I like for vocalists. It’s got to fit in with that 80s sound for me. Raphaella for example just sounds 80s, I can’t really explain it too well; even the way she ad-libs. Dana J. Phoenix also knows how to deliver a really 80s vocal. She killed it!

While you have a lot of diversity in style, a defining factor for your work seems to be that it’s composed really tightly, almost like a classical song. Do you write the parts for the whole composition in that way or is it more screwed together in your opinion?

I’d love to give a really smart answer here, but I’m just playing around with stuff until it sounds right to me. I sometimes get help on arrangements from the label or other artists, but usually it’s just having a go and seeing how it fits together.

When you do experiment with sounds, how do those experiments work their way into your finished tracks? How do you get everything to have that polish that has become the Cyantific?

See I don’t see it like that, but Wilkinson said to me recently that he thinks I spend ages designing my sounds. I definitely know how I want things to sound, how I get there I couldn’t say. It’s just refining things over and over. I listened back to some of the early versions of the album tracks recently and the sounds I used almost seem to be place-holders until I get it right.

We’re halfway through festival season. What fests and shows do you have coming up in August and into fall?

I’ve got my album launch in London shortly, then I believe I’m back in America after that, then some more shows in Europe as we get into fall.

Anything you can say about next releases?

I’ve just completed a remix of Cyborg from the album, so keep ‘em peeled for that!

Bloodline is out now on Viper Recordings. It can be streamed on Soundcloud or or Spotify and purchased on Beatport.