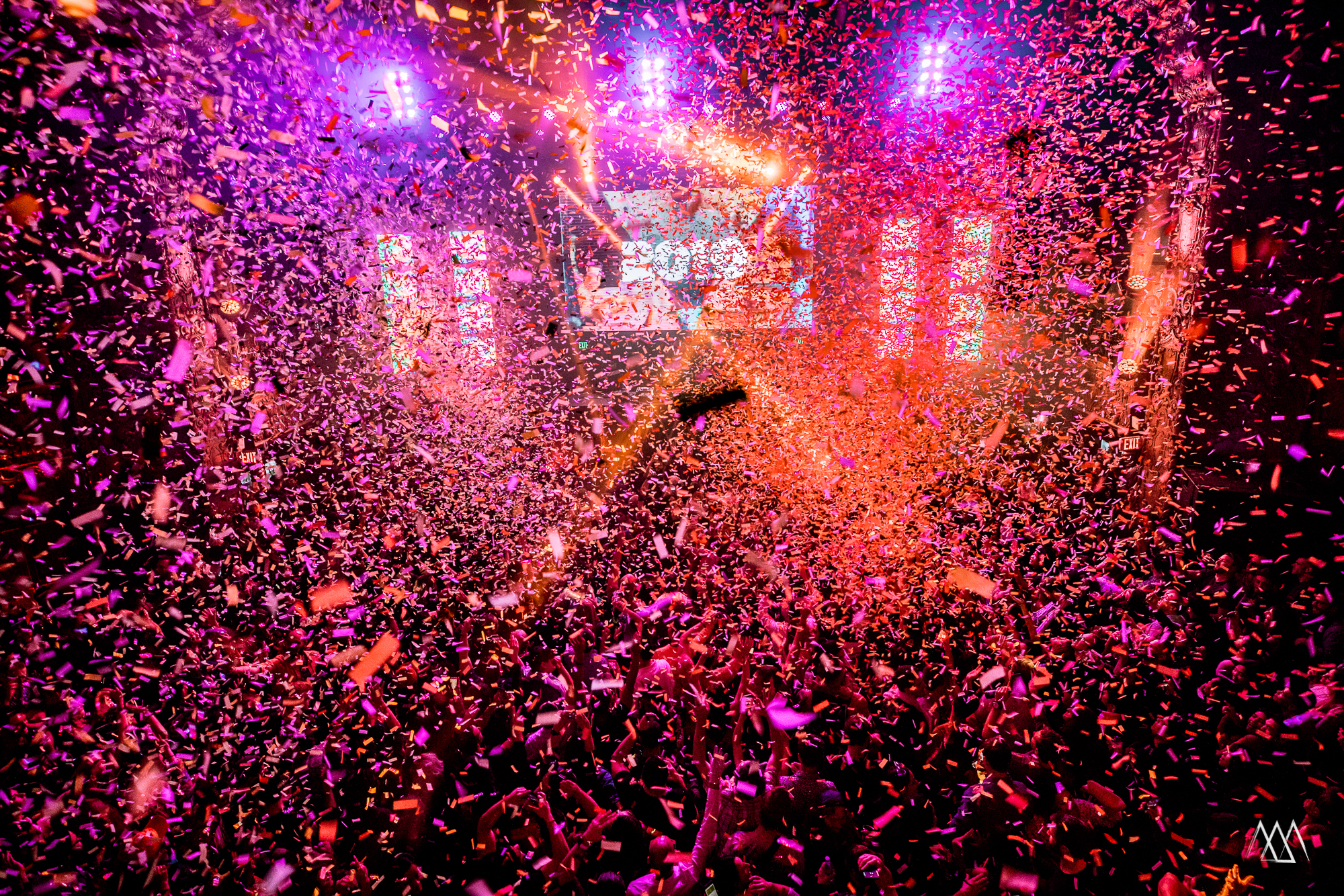 Minimal Effort has become something of  New Years Eve tradition for me. This year was my third year in a row attending the event put on by Underrated Presents. And out of the three years I attended, I would say it was easily my favorite. Unfortunately, I don’t know that everyone in attendance would agree with that statement.

Between this year’s treat of a well-executed Halloween event and the new open bar option for VIP, I had high hopes for Minimal’s NYE. Unfortunately, adding the new VIP packages and heavily promoting them seemed to be one new element too many for Minimal. I am not sure if there was a breakdown in communication with the security at the Belasco, but around 11:30 the GA line to enter was wrapped around one side of the block and the VIP line was spilling into the space of the venue next door.

Once inside, with five different stages and the always refreshing and visually stimulating vendor area at the center, Minimal Effort NYE was a blast! I started my night off in the dungeon of The Belasco with SuperFlu before quickly racing up to the ballroom to try and meet up with my friends to ring in NYE with Justin Jay. Unfortunately, I do not have the best sense of direction and ended up getting lost along the way (which isn’t a difficult situation to find yourself in the maze that is the Belasco) and I ended up at the main stage dancing 2018 out of my system to Sasha as the clock struck midnight. Personally, I actually enjoyed having this moment just to myself and felt like it kind of set the tone for the new year. I had a sense of well-being knowing I could take my life and happiness into my own hands and not sweat the small stuff such as getting lost in a maze of a venue. After Sasha, I split the next couple hours again going up and down the Belasco stairs so I could see both Hats & Klaps and one of my favorite Dirtybirds, Will Clarke, before ending the night with a bassy, grimy set by Skream. If there is one thing that Minimal Effort has managed to always get right it is always having a killer lineup that makes each year an irresistible techno retreat. But, having been to a handful of Minimal Effort events over the years, there are still some issues they need to iron out as they continue to grow and bring in larger and louder crowds.

This leads to the only other complaint I heard throughout the night: the open bar. While this seemed like a great idea when it was first announced, this new perk just didn’t quite live up to the hopes of those who spent the extra money. While I did not have access to the open bar, a couple of my friends purchased VIP tickets and their report of the new “Open Bar” was overwhelmingly unimpressed. Overzealous security, again, was the main source of complaint. Once in the bar area, you could not leave with any sort of liquid (including water) which meant anyone who had a mix of GA tickets and VIP tickets had to choose between being with their friends or staying where they could get a free drink. While I understand they don’t want one person in a group getting a VIP ticket and then supplying a large group of friends who purchased GA tickets with drinks throughout the night, the way it was handled made anyone I knew who had the VIP option not want to use it. Also, if an artist is DJing an event, I think we can all agree they should be able to access the VIP open bar. If not to get a free drink for their hard work, then as an extra perk for the fans in the VIP area who would have had a kick out of hanging out with them.

While neither the long line nor open bar missteps had much of an effect on my night, it was a sore spot amongst many who attended leading to several dissatisfied comments on the event’s social media. Overall, Minimal Effort NYE definitely has room to improve as far as organization and perhaps choice in staff and venue. But with the lineup these guys bring year after year, I honestly can’t imagine ringing New Years Eve at any other festival.

Note: I did not come up with the title to this review. I have to dedicate that to an amazing group of weirdos that have been my friends, family, and whose support was the only thing that kept me sane in 2018.