City Of Miami Scheduled To Discuss Ultra In Meeting On Thursday

Ultra Music Festival faced many challenges in 2019, not least of all the truncated preparation period afforded to them by being ousted from their Bayfront Park venue. The move to Virginia Key was approved in November 2018, giving the festival only four months to effectively plan and execute a festival for 50,000 people with loads of environmental red tape. It’s a miracle it happened at all, and speaks to the professionalism of the team at Ultra.

But not all that glitters is gold, and the festival must still defend its position at Virginia Key for the years to come. On April 7, the week after the festival, Miami-Dade Mayor Carlos Gimenez said, “I think putting 50,000 people in Virginia Key is not a good idea. There’s only one way in and one way out. I think they need to find a better place for it.”

A meeting with Mayor Francis Suarez, City Manager Emilio Gonzalez and other admins was expected to review “what worked and what didn’t during the 3-day event,” which is now scheduled for this Thursday.

On the meeting’s agenda, it simply says “a discussion regarding Ultra,” which is sponsored by Commissioner Joe Carollo. If you’ll recall, Carollo was the main opponent of the festival in the hearing last November; whether his thoughts have changed or not as a result of this year’s event is an unknown but important factor in this Thursday’s meeting.

Miami Herald reporter Joey Flechas will more than likely be there tweeting live from the meeting — follow him and Your EDM to stay up to date. 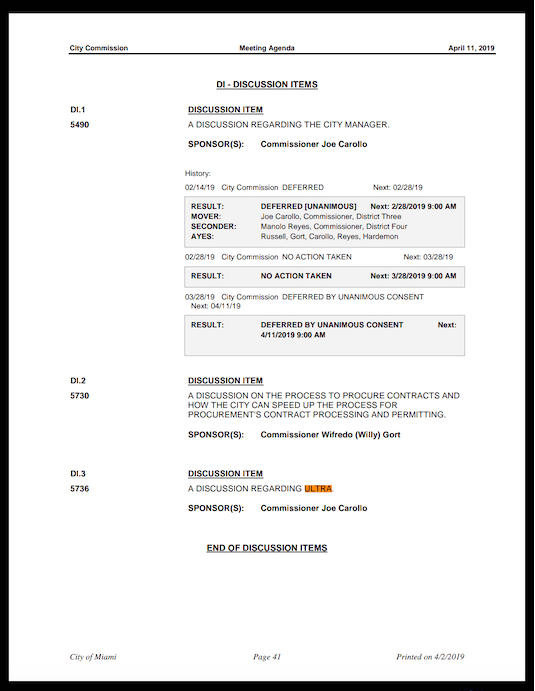