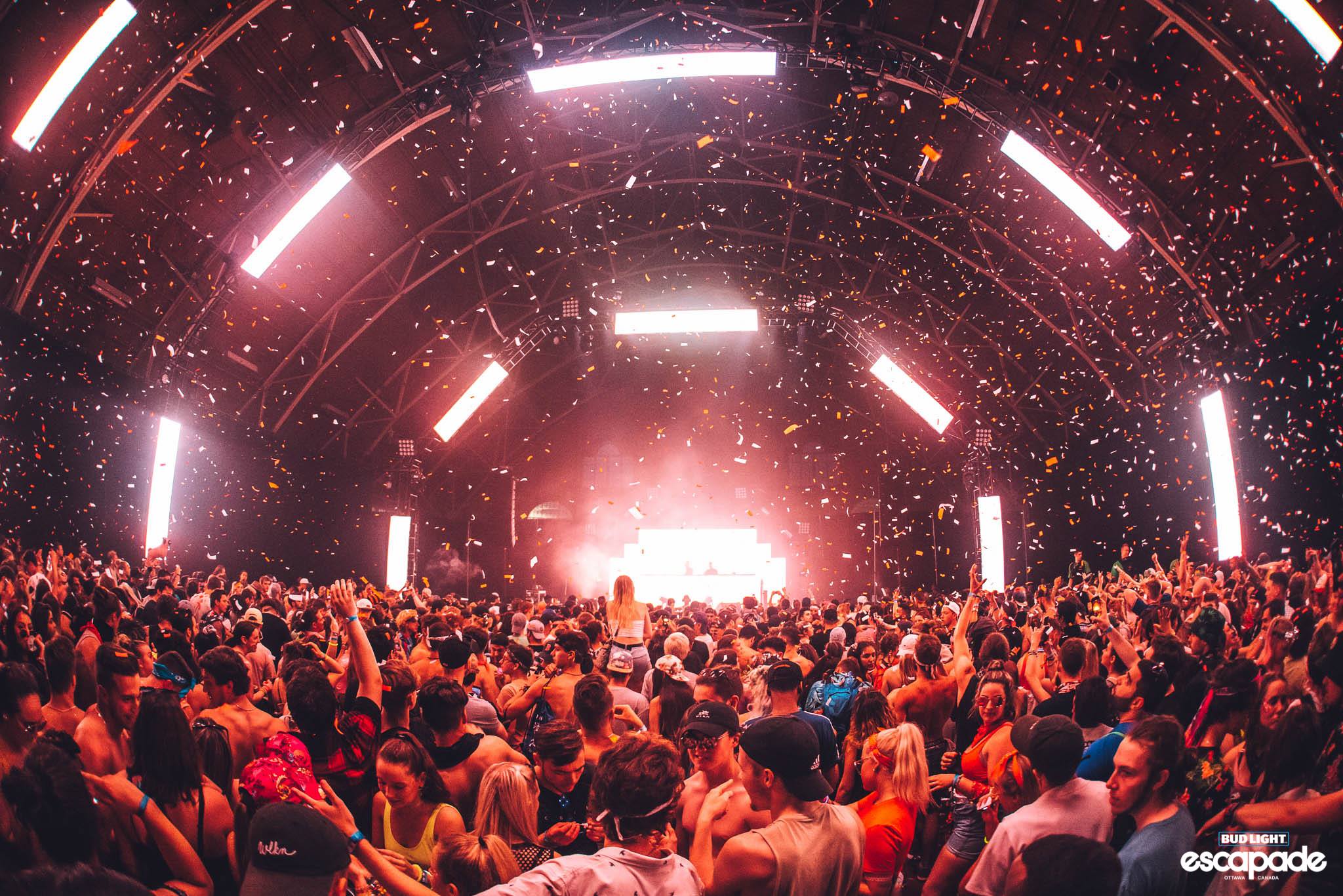 How Escapade Festival made Ottawa a worthy EDM destination

When someone says Ottawa, what follows is typically something along the lines of, “Where?” It’s true that Canada’s capital city (it’s in Ontario by the way) is a little behind the times when it comes to EDM when compared to neighbouring cities like Montreal or Toronto; but in fact, its electronic music scene is healthy and thriving and has been since the ’90s.

The now-defunct club Atomic was a regular stop for scene veterans like Sasha and Digweed and Richie Hawtin in the ’90s and Mercury Lounge is still kickin’ to this day. Nowadays, clubs like City at Night and Aléa regularly host top DJs across all genres and festivals like Escapade are making the city worth a weekender to the nation’s capital. With the 10th anniversary of Bud Light Escapade Festival unfolding in just a few days featuring a lineup stacked with names like Kayzo, DJ Snake, Zeds Dead, Tiësto, KSHMR, Tiga, Adventure Club, 1788-L and more, here are five more reasons — not that you need them — why Ottawa is worth the trip this weekend

Ottawa’s got DNA at the helm

After years (if not decades) of promoters trying to bring big names to a small city, DNA stepped in and changed everything. Their perseverance caught the eye of Beach Club in Montreal and festival giants Live Nation and made a festival size event like Escapade Possible in a city that most people have never heard of.

“Our success is probably attributed to a team whose belief is that Ottawa ISN’T a sleepy city. Our mentality has always been that if we provide the city with world-class events and artists that they will support us and as we can see, they have. From day one, we’ve had the mentality that ‘if you build it, they will come’.”

Undoubtedly, the organizers of Escapade are responsible for turning up the volume on Canada’s sleepy capital city. From the Ottawa Baseball Stadium to Rideau Carleton Raceway to Landsdowne Park, Escapade will host its 10th anniversary edition this upcoming weekend with upwards of 30,000 people and will see several upgrades this year, according to the organizers. “We have a major change this year at the site in that we are moving our arena stage to outdoors on the football field. This allows us to increase our capacity and lend the event a more festival feel by having two outdoor stages.

“Our VIP experience will also be enhanced with more washrooms, special fx, and more seating. Our vendor village will offer more food choices including healthy alternatives and vegan options on top of standard festival fare. We will also have massage stations and a partnership with Kandies world that will bring some products to the festival that we’ve never had before.”

Its scene may be small but hugely underestimated

Ottawa might have a small city vibe but that makes it an ace destination to party. Think cheaper hotels, shorter taxi rides, and smaller queues. With DJs coming in weekly, events are cozy and vibes are big. DNA, the organizers of Escapade, play a big part in that, too.

“We produce a number of EDM acts annually in Ottawa. Outside of Escapade, we produce another yearly festival in Gatineau (the Ottawa region) called Riverside. This two-day event has quickly grown over the past five years to having 10,000 attendees. This year we are on track to break that number. We’ve also been doing events at the EY Centre during the school year with acts like Deadmau5, DVBBS, Steve Angello, Above & Beyond, Jauz, Hardwell, Marshmello, and more. Lastly, Barrymores music hall does weekly EDM events at their venue which has seen some of the biggest acts play over the years.”

Yes, there are afterparties

Veteran clubs like Mercury Lounge, Babylon and Barrymores are still going strong with parties and afterparties but newcomers like City At Night and Aléa Nightclub are also on the not-to-miss-list when on a weekender to Ottawa. With an 11pm curfew at the festival grounds, Escapade has gone all out with afterparties for this particular weekend. See the full rundown below:

There is no time to waste being hungover

Without a doubt, Ottawa is a beautiful city – don’t sleep on it. Come a day early, stay a day later and don’t let your hangover get the best of you. The city is brimming with ultra cool restaurants (check Whalesbone, Union, and don’t miss The Manx for a killer hangover brunch) and bars serving local brews and super strong Caesars (the Canadian version of a Bloody Mary), not to mention a big number of moderately cheesy tourist attractions (I mean, what’s a trip to the capital without a selfie in front of Parliament). There is plenty more to do in your off time too, say the organizers.

“In the summer you have to check out the restaurants in the Byward Market, a bike ride or stroll by the Rideau Canal and no trip to Ottawa should be complete without a stop at the Parliament buildings. The Byward Market area is filled with bars and restaurants and Casino Du Lac Leamy is only 5 min away which is home to Aléa Nightclub and is considered by many to be one of the best clubs in the region. The new Landsdowne Park has tons to do as well including bars, restaurants, and weekly events including Beer Festival, Yoga, Escapade, City Folk and more. Visiting Ottawa in the summer or winter always has something for everyone.”

Escapade takes place in Ottawa on June 22nd and 23rd, which is just a few hours drive from Montreal and Toronto. Tickets are almost sold out but you can still pick up a one day pass for Saturday on their website here.