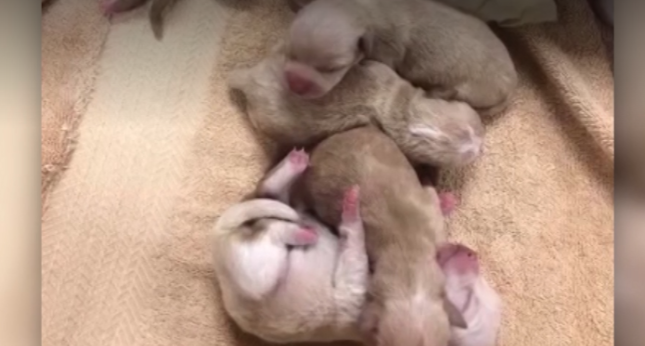 A woman has reportedly been sentenced to a year in jail after throwing away seven newborn puppies in Coachella, California. Yes — you read that correctly — she THREW AWAY SEVEN NEWBORN PUPPIES.

Deborah Sue Culwell was caught on camera throwing the 3-day old pups into a dumpster back in April. Thankfully, the cruel act caught up with her and she will spend an entire year behind bars for her actions. The woman will also serve seven years of probation, during which time she will not be allowed to own any animals.

Surveillance showed Culwell driving up in her Jeep and nonchalantly tossing a plastic bag into the dumpster, which held the litter. Thankfully, a man heard the cries of the pups and saved them from the trash.

Sadly, the runt of the litter passed away a week later — but the rest were nursed back to health. Following the woman’s arrest, another 38 dogs were rescued from Culwell’s home and prepared for adoption. Most were taken into care by area rescue groups.

An animal services spokesperson said at the time: “There is no excuse for dumping puppies. Especially in today’s age when we or other shelters would be willing to get these animals to foster parents or rescue partners. This was a shameful act.”

The puppies were dumped during Coachella Valley Music and Arts Festival. While Culwell had no link to the music festival, the story saw massive media attention given the circumstances.

A woman tossed these pups in a Dumpster in Coachella. News release posted on our Facebook pages. Pups OK. In foster care #RivCoNow pic.twitter.com/Jn2OMBSOZj