The Las Vegas Edition of the BigCityBeats WORLD CLUB DOME was set to take place June 5-7 in the Commerzbank-Arena Frankfurt. However, the event was cancelled on account of COVID-19. Nevertheless, BigCityBeats CEO Bernd Breiter and his team, racked their brains looking to create a concept that would still allow WorldClubbers the opportunity to experience the glamour of World Club Dome – Las Vegas, but in guaranteed safety. Their final result was to combine real life and virtual reality and create a one of a kind World Club Dome – Las Vegas Edition. Three days, the largest club in the world across all mediums, all channels, stimulating senses all through the prism of live events and the power of the internet. Live from Mannheim, live from the Frankfurt Stadium Pool, and broadcasting around the world.

On Saturday June 6, at exactly 12 noon, the huge live event will commence streaming; keen observers will have already realized that this is the exact time the gates of the Commerzbank-Arena in Frankfurt would have swung open. To begin the event, all BCB.FM superstar DJs will share a symbolic handshake. Then as the evening approaches, a moment that no-one around the world could imagine. A spectacular live show, which will include pillars of fire, mind-blowing lasers, CO2 cannons, plenty of pyrotechnics, and of course, the most ambitious and best music event in Europe.

While WorldClubbers will have to exercise patience until they can experience Las Vegas Edition 2021 in Frankfurt, the Mannheim Maimarktgelände is set to become one of the biggest dance floors in Germany: 600 “dancing cars,” a total of 1000 party goers, plus hundreds of thousands of people from around the world tuning into the live stream. Live on stage: Gestšrt aber GeiL and Le Shuuk. And connected live on big screen: EDM superstars from around the world. But that’s not all we have in store. Fans of the harder sound of dance music can prepare themselves for a Zombie Stage takeover of the WORLD CLUB DOME Drive-In. An additional highlight of the night will be further announcements of headline DJs for BigCityBeats WORLD CLUB DOME Winter Edition in Dusseldorf, January 2021.

Pre-registration for the Las Vegas Drive-In has already begun, with pre-sale to follow shortly. Find out more at worldclubdome.com. 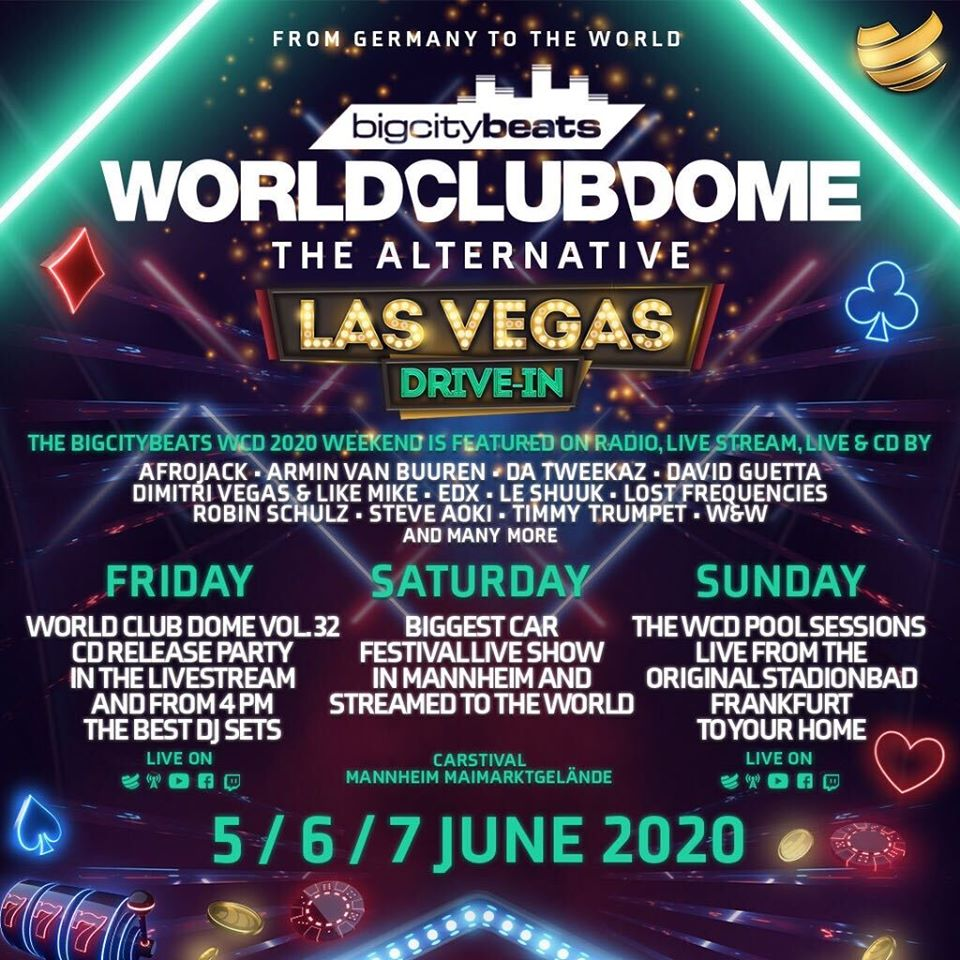