Memorial Day weekend has long stood as a beacon for techno fans and house heads across the globe. For nearly 20 years people have flocked to Detroit in droves just so they can be enveloped within the concrete playground that is Hart Plaza. However, like nearly every other event this year, things didn’t go as planned.

Being one of the last summer festivals to holdout on their postponement announcement, Movement Detroit finally gave word back in mid-March that they would be moving their event to the weekend of September 11th-13th. This news, while disappointing for many, came as no surprise due to the major uptick in Covid-19 here in the United States.

Nevertheless, Movement and Paxahu is keeping with tradition and are determined to have us grooving and shaking all weekend. That is why, starting tomorrow – what would’ve been the festival’s opening day – you can tune in for a condensed version of the original 2020 lineup from the safety of your own living room with #movementathome.

“We are committed to sharing with you the authentic Movement experience no matter where you are. It’s no replacement for an evening in the amphitheater, or a sweaty night in the underground, but that won’t stop us from letting loose like only Detroit can.” 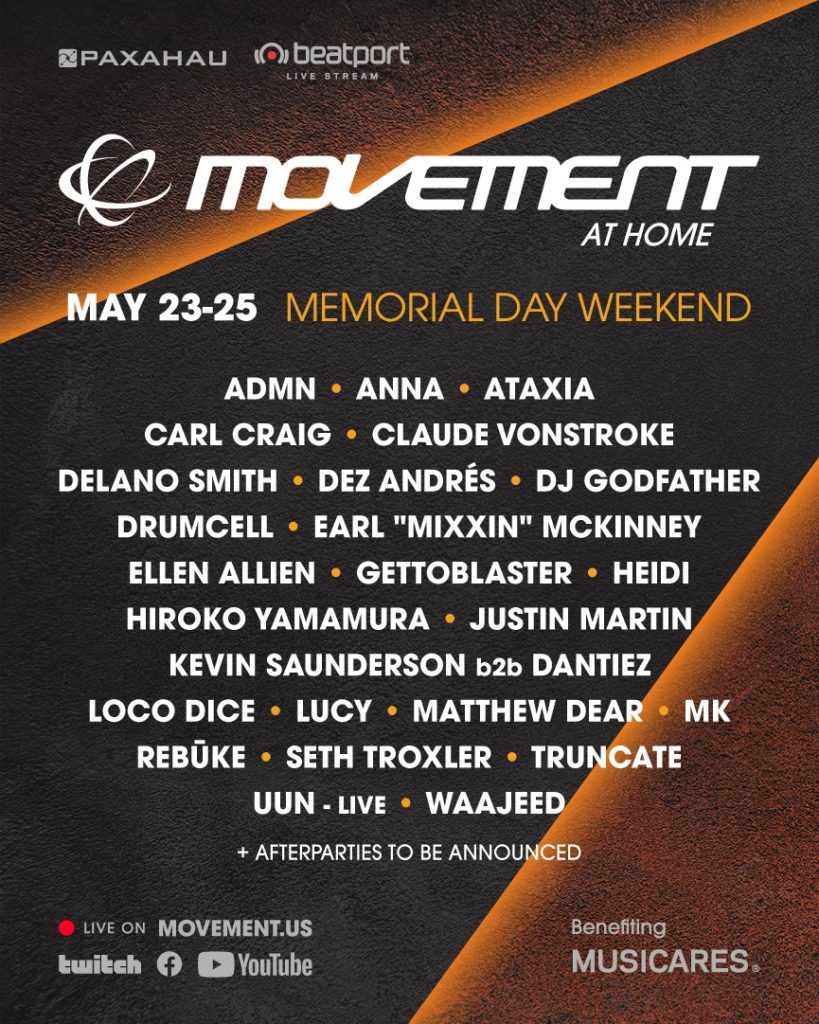 Music kicks off everyday at 2 pm EDT / 7 pm BST. However, it wouldn’t be Detroit without a stacked after hours lineup — luckily, Movement has you covered. You can check out each daily schedule and afters below.

My advice? Take your disco naps now cause it’s still a full weekend of uninterrupted grooves.

Saturday
No Way Back: Streaming From Beyond

No Way Back: Streaming From Beyond

For more than two decades, Movement and the city of Detroit have cultivated an unmistakable sense of community that even a global pandemic can’t shake. To keep the spirit of Detroit alive, attendees are encouraged to get involved over the course of the weekend. That means whether you’re broadcasting to the whole family, or a party of one, Movement and Paxahu want to see it! Your at-home discotheque, your favorite festival fit, and of course, your smiling faces! Use #MovementAtHome or tag @movementdetroit for a chance to be featured on their feeds.

Movement has even teamed up with Aptemal to host a fashion challenge during Movement At Home. The contest is pretty straightforward: just show them your best festival ensemble by posting a photo or video. Be sure to use the hashtag #MovementOOTD (a must), and tag @movementdetroit and @aptemal for your chance to win exclusive Movement and DHH merch packs! Contest ends May 25th at 10pm EDT.

You can tune into Movement At Home from Movement.US, Twitch, Youtube, Facebook, and Mixcloud. With all those options there really isn’t a real justification as to why you can’t join in with the rest of us this weekend in our own makeshift Hart Plazas.

It’s time to stomp your feet to the endless hours of music ahead of you, and probably make your downstairs neighbors a little unhappy in the process ;).