Shaq’s Fun House and Gronk Beach are taking things to the next level with a one-of-a-kind collaborative live stream event for charity. Hall of Fame legend and 4X NBA champion Shaquille O’Neal and 3X Super Bowl Champion Rob Gronkowski announced today that they are teaming up for Shaq’s Fun House vs Gronk Beach Presented by The General Insurance.

The live streamed party with a purpose will feature epic SHAQ vs GRONK challenges & superstar musical performances while raising money for the NAACP and Boys & Girls Clubs of America in an effort to help in the fight against social injustices. In addition, the official food delivery partner of the event, DoorDash, has pledged to donate one meal up to 1.25 million meals to people in need for each viewer in the livestream through their partnership with Feeding America. The one of a kind global livestream will take place on June 27th starting at 8pm EST. Fans can tune in free of charge at www.ShaqVsGronk.com and directly on Tik Tok.

“I always say there are two things that truly bring people together, Sports & Music. So I called up my brother GRONK and my partners at The General Insurance and together we created a party with a purpose that is giving back to the community” – Shaquille O’Neal

“Ever since my first dance battle with SHAQ I have been waiting to challenge him again. I’m so excited to compete against SHAQ in five epic challenges all to benefit great charities, plus bring the world together for some fun with some of our favorite artists.” – Rob Gronkowski

SHAQ & GRONK are set to compete head-to-head in interactive challenges including the following:

YAPPA, the official communication platform of the livestream, will power the live chat during the stream and also present a SHAQ v GRONK game of HORSE where fans have the chance to be a part of the stream by “Yapping” the type of shot they want SHAQ or GRONK to take.

Along with all of these one-on-one challenges, plenty of there will be plenty of musical performances and live interviews from artists including DaBaby, Snoop Dogg, Steve Aoki, Diplo, Carnage, and SHAQ making an appearance as DJ Diesel. Hosting this epic event will be journalist and broadcaster for Turner Sports, Taylor Rooks, alongside legendary comedian JB Smoove. In addition, fans from around the world will be able to show off their best at home dance moves alongside SHAQ & GRONK via The General’s Fan Cam – so get ready to DANCE! 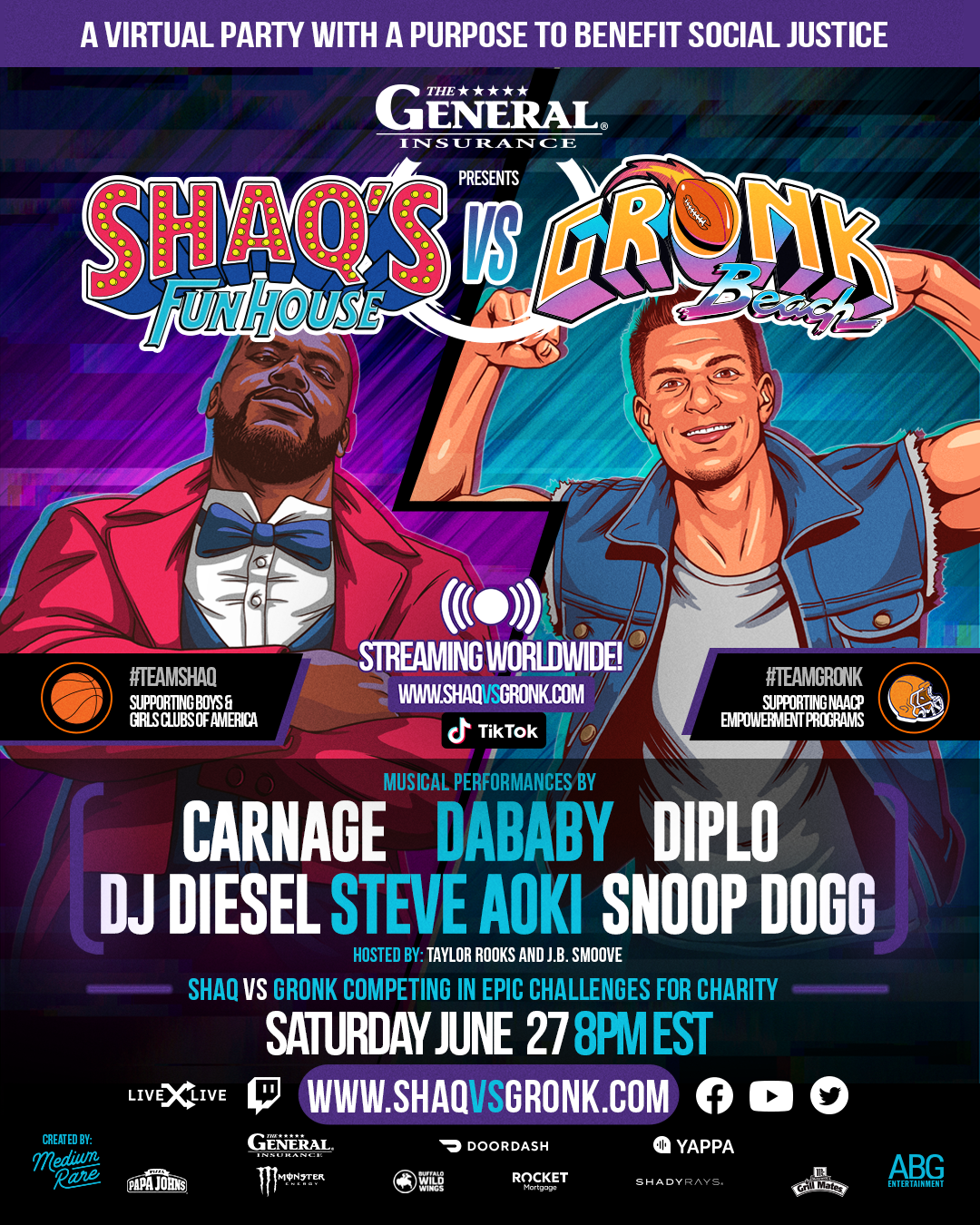 Woodstock 50 Seeking Tens of Millions from Lead Investor for “Sabotage”

Woodstock 50 Seeking Tens of Millions from Lead Investor for "Sabotage"