In an unprecedented move this week, Twitter has made the unilateral decision to outright ban EDM from its platform.

The move was announced in a press release sent out this morning, as well as a tweet from the official Twitter that mentions the decision was “not made without heavy consideration.”

Expounding on the decision in their press release, a spokesperson for Twitter cited the “large degree of infighting” within the community as one of the main reasons for the ban. 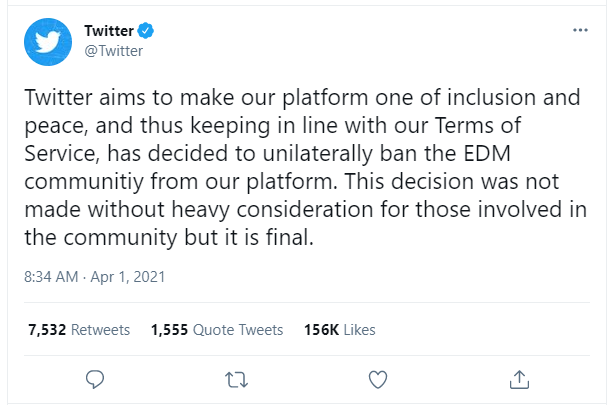 “We’ve seen the ongoing discussions between fandoms over which genre is better — trap or dubstep, house or techno, whether someone would go to the Pink Stage or the Green Stage, and honestly we’re just done with it,” the press release read. “Most of the time when we receive reports, they’re either valid or invalid. With reports stemming from the EDM Twitter community, a large portion are petty or vindictive and while we’d love to take every report seriously, we’re just tired.”

The decision marks the first time an entire interest group has been banned from the platform, and is sure to be fought against by fans of the genre on both sides of the aisle, metaphorically speaking. It’s just a shame that they aren’t allowed on the platform anymore to fight back.

It’s hard to speculate on whether one single event was the straw that broke the camel’s back, as the ongoing state of the Twitter community seems to be heavily referenced in Twitter’s press release. Likewise, with “unilateral decision” and “final” appearing in their official announcement, it seems unlikely that this outcome would be reversed anytime soon.

Your EDM reached out to Twitter for further comment. We received an autoreply that simply stated, “We said what we said.”

Your EDM Premiere: Smooth, DC Breaks and Coppa Take a ‘Chainsaw’ to the Dancefloor [Korsakov Music]

Your EDM Premiere: Smooth, DC Breaks and Coppa Take a 'Chainsaw' to the Dancefloor [Korsakov Music]