by Petey Mac
in Editorials

Really, Grammy’s? Don’t get me wrong, I love the exposure Electronic Dance Music has received from the Academy, with four categories nominating artists like Diplo and Skrillex, but putting Al Walser’s garage band jam among the huge hits like “Levels” and “Bangarang” is simply absurd. That’s like putting Rebecca Black in the Rock ‘n’ Roll hall of fame. It just shouldn’t happen. All jokes aside, it’s a slap in the face to the Best Dance Recording category as well as to the artists (Avicii, Calvin Harris, Skrillex, Swedish House Mafia). The amount of effort and work put into all of these tracks is the reason for their extraordinary success. Furthermore, it is through these songs that the genre has experienced so much recognition, especially across America, no matter how “mainstream” they may be to us critics.

So who’s Al Walser? Well, he’s an actual Grammy voting/nominating member, need I say more? Oh, I almost forgot, he’s got a ground breaking 568 followers on twitter. Still, he has yet to produce anything close to being respectable. The fact that he actually got a nomination over so many other talented artists like Tiesto or even Afrojack is beyond me and the Grammy’s too. You’re probably thinking ok, well if this is true, how did he get enough votes to even get considered?

After delving more into this scandal, I’ve gained a better understanding of how Grammy voting actually works. First off, there are roughly about 10,000 members who have voting rights on the board. Yet, the selective process is arranged very loosely. Essentially, if a person has “some” amount of credential and is willing to pay a fee, he or she can vote. That’s it.

So, after someone is admitted, they are invited to join Grammy365, the Facebook for Grammy board members. As you can assume, each member has “friends” on the site, theoretically allowing the member to connect with more people in the industry. However, this can also be a perfect opportunity to use the site as a means of promotion in order to gain recognition among Academy members, obtain votes, and in the end, win a nomination. A path that many, including myself, accuse Al Walser of taking.

Here’s a photograph of his activity on the site: 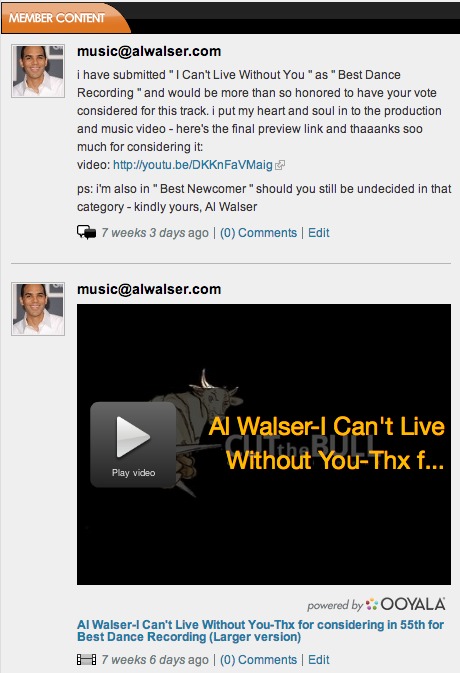 Much of his posts consist of him generously asking for “I Can’t Live Without You” to be simply considered. He constantly uploaded these blurbs to network as much as possible with anyone he could before the voting deadline. Unfortunately for us, since EDM just started to receive attention within the industry, there aren’t many people who know much more than names like “Levels” or Skrillex. Thus most members are inclined to vote for the artist they recognize most, like Calvin Harris or Avicii. Yet, if they have nearly no knowledge of the genre and one of their “friends” kindly asks them to vote for their a song, chances are they will vote for him, thinking him to be a favorite in the genre.

In addition this whole scandal, the official remix package of “I Can’t Live Without You” is now being sold on iTunes containing stems literally identical to Zedd’s remix stems of Spectrum! Zedd has already responded via twitter towards this monstrosity and it can only be a matter of time until lawsuits get into the picture.

Overall, this nomination proves to be a major embarrassment to the Grammy Academy, and music in general, as a no-name, substandard producer found a loophole through the system and landed a undeserving nomination among acclaimed artists. He’s even blatantly stealing from another musician and selling the work for personal gain. Hopefully, all of this will encourage the Academy to revamp their system and also include more EDM artists on the voting board, since Skrillex is the only nominee that’s a voting member, in order prevent another Al Walser from scamming his way to a nomination.

Here is the song that got Al Walser the nomination:

Here is an interview with Al Walser by House.net Editor-In-Chief Albert Berdellans.

Check out all of the Grammy nominees here