UPDATE: If you needed any more confirmation that Daft Punk produced Kanye West’s upcoming “Black Skinhead” well here you go. We give you the credits to the SNL episode where Kanye previewed his new song, and as you can see, it clearly mentions Thomas Bangalter and Guy-Manuel de Homem-Christo’s names. 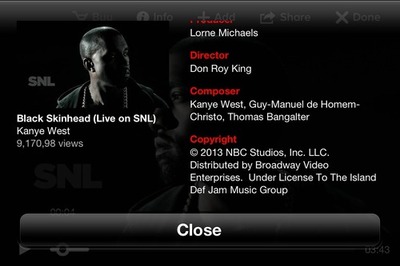 Last night on a saturday night live, Kanye West debuted 2 songs off his upcoming album, Yeezus. One of the tracks he premiered, “Black Skinhead“, is said to be the track that Daft Punk helped produce. Jonah Weiner, the writer behind the soon to be released Rolling Stone’s Daft Punk interview, tweeted about the the collaboration between Kanye and Daft as well as releasing a clip from the upcoming interview:

If this isn’t evidence enough, Daft Punk described in their Mixmag Global interview that their upcoming music with Kanye was “super primal and raw and super violent” which fits the “Black Skinhead” track perfect. We will keep you updated as we hear more but, for now, check out the SNL clip below and be the judge yourself!