Lorde: The Current Queen of Pop, Future Queen of EDM

by Your EDM Staff
in Artist Spotlight, Worth Sharing

Ella Yelich-O’Connor’s voice is one of the most breathtaking I’ve heard, dare I say it, ever; especially given the fact that she is only 16 years old. Recently FasterLouder caught up with the young, but incredibly poised, star for an inside look into her incredible rise to fame.

Lorde’s biggest hit so far has been ‘Royals‘, which has sparked a huge number of remixes, mashups and covers. I wanted to bring to light some of my favorites which are a little less than well known.

The first is from Huglife an artist who specializes in remixing and he absolutely killed it with this minimalist take on Royals.

The next one really highlights how diverse Ella’s sound can be. UntilTheRibbonBreaks displays the ambient approach in this beautifully composed remix.

The last one I want to share is a mashup from bvnny. The mash includes Lorde, Ellie Goulding, Mike Will Made It, Macklemore, Katy Perry and One Republic…Im winded just from typing all those huge names, but just wait till you hear how they blend seamlessly into one beautiful track.

Now let’s talk a little more about how she just may be on her way to taking over the electronic genre, besides spurring remix after remix. In the interview with FasterLouder she explained that her Manager, Scott Maclachlan, had told her that David Guetta wanted to include her on his next album. Her response? “No. Fuck no. He’s so gross” but don’t take this as slam against electronic music by any means. When asked who her dream producer would be she replied with “These days I’m leaning toward Diplo.” Um, can anyone say ‘Paper Planes’… If Ella and Diplo were to team up the result would be extraordinary and I for one can already begin to feel the goosebumps that the collaboration would cause. 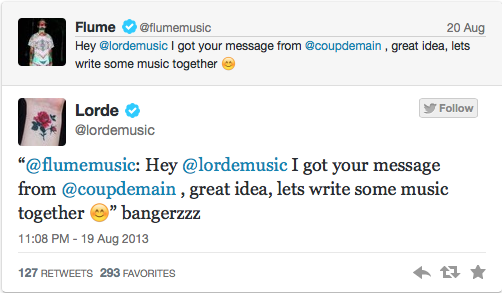 Although it appears her reply has since been deleted, credit to inthemix for finding it before it was.

After reading the interview I can honestly say I think I’m star-struck by Ella, with wisdom far beyond her years, she is walking proof that reading 1000 books before the age of 12 can only be good for you. And yes, she did just that. And yes, it’s the reason her writing is so profound compared to any other single in the Billboard top 100, or anywhere for that matter. I can’t urge you enough to read the interview and watch out for this girl. She’s already huge but she’s just getting started.