Song identifier app Shazam has teamed up with Juno Records, an online dance music retailer, to thicken its dance music database by over four million tracks, including thousands of vinyl-only releases. This partnership comes right in time for Miami Music Week and Ultra Music Festival, where Shazam users can identify songs and immediately purchase them through the Juno store online.

“Vinyl music is seeing a resurgence in the industry, with sales at their highest for 15 years,” said Shazam’s VP of music and content, Will Mills. He added, “Crucially, some of the most important and exciting new music is released on vinyl first before later hitting digital, so this gives Shazam’s 420 million global users an even better experience with the world’s newest and most innovative music, which is sometimes beyond the digital ecosystem.”

Started in 1997, the U.K.-based Juno Records sells dance music vinyl, CDs and digital downloads, as well as DJ and studio equipment. Each month, Juno updates its catalog with thousands of new digital tracks and hundreds of vinyl releases. “Many of the releases we stock and sell are often not available on commercial download stores for weeks after their release on Juno, so we believe that we can bring an extra dimension to Shazam’s already excellent service,” explained Richard Atherton, marketing director of Juno.

2014 is looking like a big year for Shazam with a new TV app and partnership with Warner Music Group already underway. Learn more about the joint force between Shazam and Juno and the rise of dance music vinyl sales below. 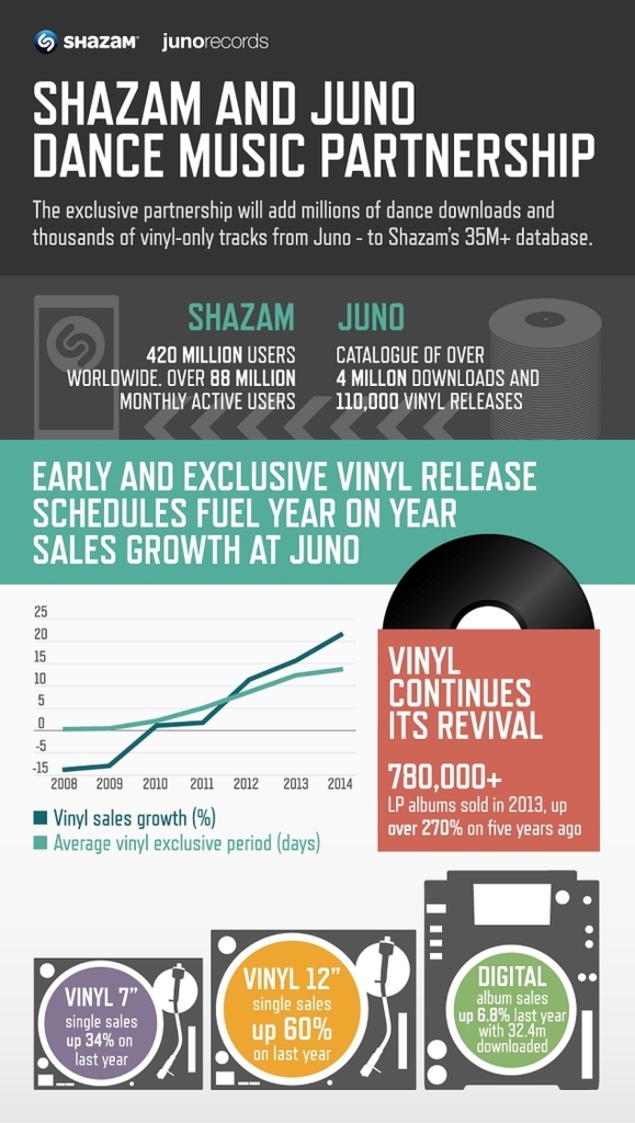 Gentlemen: Turns Out Fist Pumping May Be The Key To Finding That Special Someone

Gentlemen: Turns Out Fist Pumping May Be The Key To Finding That Special Someone