by Your EDM Staff
in Editorial

Dream Rockwell is the founder of Lucent Dossier Experience, a live performance Vegas-like art show spectacular, and one of the founders of The Do Lab, the talented production company behind Lightning in A Bottle in Southern California. With Canadian blood in her veins and a deep sense of nature rooted in her psyche, Dream’s spirit glistens within every one of her projects.

“Lucent Dossier Experience is, at its very core, a playground for the innovative genius child in all of us. It is a collective based on magic and inspiration, living by the ancient wisdom of choosing confidence over doubt, joy over pain and love over fear.” Imaginative, Mind-blowing, and oddly-unique. Word’s I find myself using time to time in an attempt to describe LDE to people who’ve never heard of them before they actually see the spectacle for themselves. The live set is something right out of a Cirque du Soleil Vegas show and fortunately for me, I was lucky enough to pick the brain of the head conductor, the puppet master of sorts, Dream Rockwell. Check out my Q&A lightning round with her below.

Describe your music in one sentence.

Sonic waves that bridge worlds from the ancient to the future, finding human connection woven within heavy electronic bass.

How did you all meet / How did you find yourself working in Cirque de Soleil-esque performances?

We all met in so many different ways. Roger Fojas, Dayna Riesgo and i worked together in another cirque troupe together called Dream Circus, interestingly enough. We’ve been together for 10 years. Linda Borini i saw in a picture and fell in love. Same with Alicia Schultze. Rajiv Jain and Metaphase came magically through another performer. Jen Shields and Christine Ivy we found at an audition, one of the few that we’ve had over the years. We knew the second they walked on the dance floor. Atla Gadret i met at a party and i just knew we were destined to create together. Sarah Llewellyn was sent to us by the elves and fairies so we could remember our roots. Sheldon Springs was given to us by the gods of dorky cool, fo-realz. We’re like a perfect alchemical blend. We all teach each other so much. We complete each other 😉

How did you come up with the name of Lucent Dossier Experience?

‘Lucent’ was Josh Flemming’s favorite word, it means glowing light and he’s a lighting genius and ‘Dossier’ was one of my favorite words (I also love tumbleweed… which could have been interesting, but we went with Dossier) Dossier means to collect or compile. And the Experience was the suggestion of one of our biggest fans who said that we really were more of an experience then just a show or music. We like that and we agree. 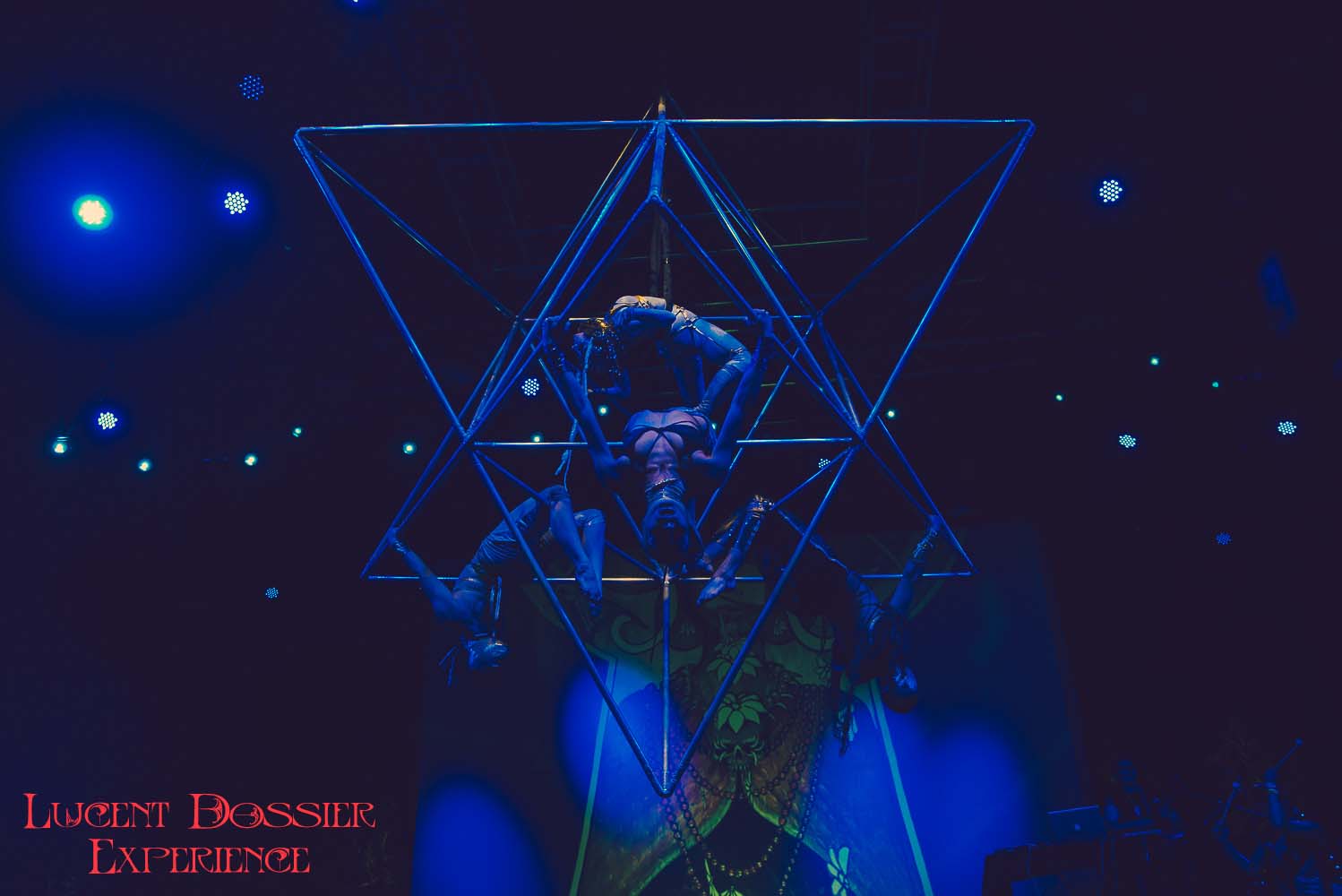 Tell us about some of your upcoming releases.

We are releasing our upcoming album Light of the World Tuesday, May 20th. This very much excites us. It’s over a year in the making.

Lucent Dossier Experience are taking their mystifying show on their first North American Headlining Tour titled “Light of the World” this Spring 2014. After headlining Coachella’s Gobi Stage, they are set to mesmerize each city with a unique visionary spectacle complete with captivating aerial arts, acrobatics and contortion alongside fashion-forward styling and high energy, eastern-inspired electronic bass music tied together in a seamless 90 minute show.

The “Light of the World” tour begins May 23 at Lightning in a Bottle Music Festival in Southern California and then heads to the east coast for 15+ dates ending in Austin, Texas on June 13. A West Coast & Canadian tour will follow this Summer including Shambala festival in August.

Who are some of your favorite artists right now?

Love Stellamara, she’s on heavy rotation on my personal play list. Michael Jackson never grows old. Crazy about the song HAPPY by C2C. Bob Moses really brings it. KRADDY is an amazing producer and played the best EDM set i heard at Coachella this year.

“I’m super inspired by Olof Bjorn Dreijer, the main producer and co composer from The Knife! His visions and the amazing soundscape with tribal percussion and vanguard sounds mixed with lots of electro house, 4 on the floor, festival fresh sounds and experimental tones! We all also love Bob Moses. That’s what I’m into lately.” – Atla Gadret

How many hours of practice do you put into all your sets?

We rehearse almost every day. Different aspects from aerial, to fire, to dance, to the music. Lots of hours on costuming. All of it requires a great deal of attention. We’re perfectionist. And also wildly wild in our approach.

Which festival are you looking forward to the most this year? Why?

Lightning In A Bottle, of course, first and foremost… always! That’s our true home base. Shambala because it’s in Canada, my home country and i’ve heard amazing things about that festival for years. So excited to go home to Canada. And Mysteryland because the producers of that festival are legendary.

Lightning In A Bottle, going on its 9th year, is fast approaching. Talk a little bit about how LiB first got its start.

When Lightning In A Bottle started there were just three of us, Josh and Jesse Flemming and myself. When we met, we shared a vision and we got so excited to have found each other. We master minded a good lot of what the festival would come to be over one dinner. We were so excited to create a wonderland for people to come into and be more of themselves. To find their true nature. To release their passion for life into the sunshine and the sounds. I’m incredibly happy with how the festival has progressed and grown. It isn’t without endless hours of continued TLC and planning. But it’s always worth every second of the hard work. 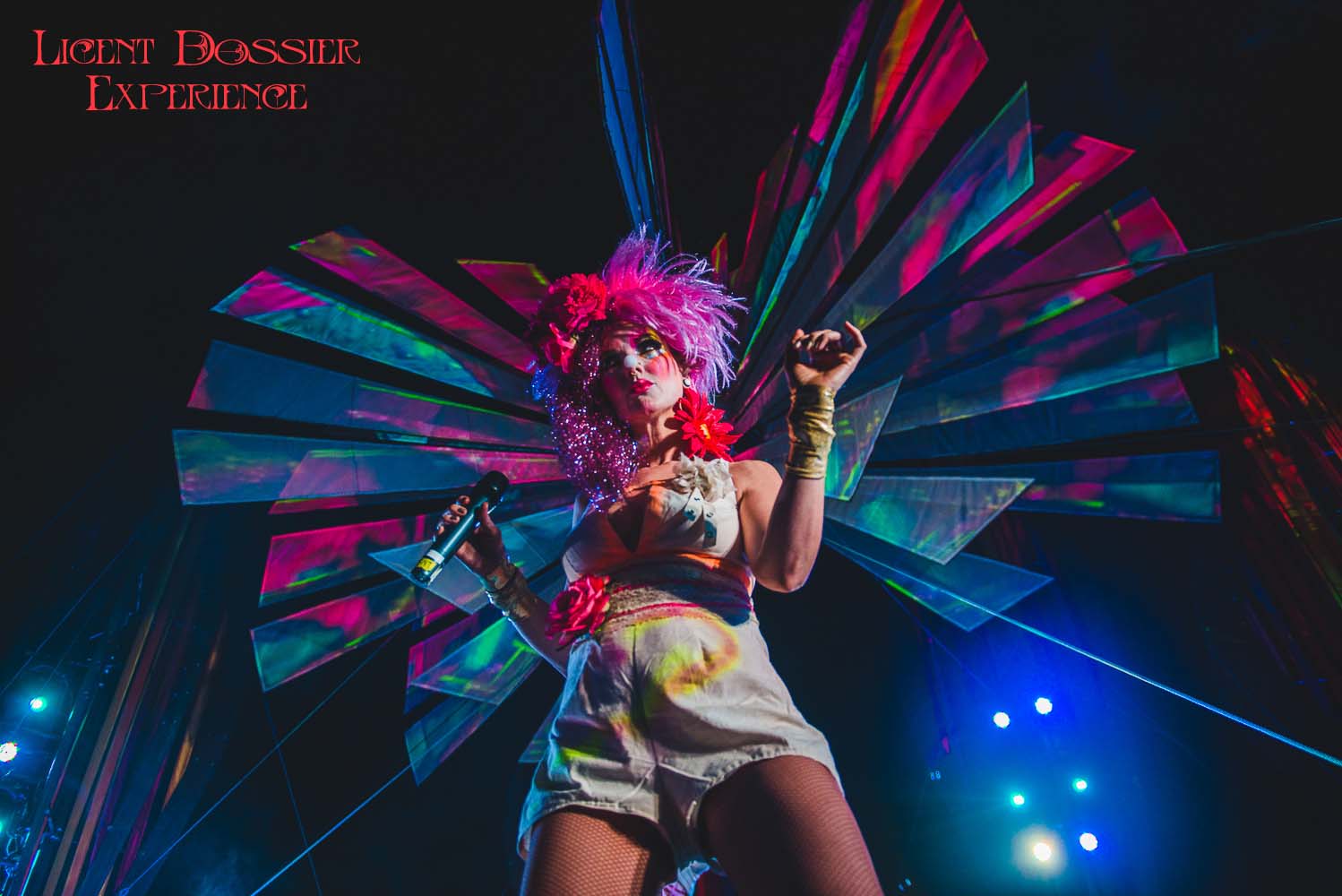 What are some of your favorite things about being such a unique artist in the scene today?

“We do what we want!!!” LOL. Sort of joking but we have carved a road that is ours and so we can sort of do what we want. It’s also pretty sweet to have fans who are so loyal and dedicated to us. Small but mighty. Love our fans. They are the most colorful rad people. They inspire us.

How do you feel about the state of dance music today? What would you like to see more/less of in the future?

Wow, that is a great question. The scene is moving so fast. I miss live instruments. I don’t like that to produce EDM you have to sit in front of the computer for so many long hours. Playing instruments is so much more fun and satisfying to the soul. I find it hard to keep up with all the new artists that arrive daily, and i’m in the middle of the scene and have been for years. But i love electronic music. I just do. Some of the frequencies that can be reached completely stir my soul. I find it very exciting. I’m here for the ride.

Do you have any words of advice for aspiring young artists trying to break into the scene right now?

It’s a lot more work then you might ever imagine it’s going to be. If you’re lazy you’ll do great making music in your bedroom to your walls. Those that succeed do so because they aren’t afraid of the hard work and long hours. And the work is mostly monkey business, it’s all the behind the scenes stuff. It’s 10% art and 90% monkey business. I hate to say it, but it is. So you have to love it. You have to choose to love all of it. It’s a choice. If you can love all the unglamorous stuff you’ll have a glamorous life.

Special thanks to my pals over at The Confluence and The Do LaB for making this happen! I hope to see everyone at this years Lightning in A Bottle next weekend in Southern California! Grab tickets while you still can HERE and also keep an eye out for our review post-festival.