Your EDM Exclusive Interview with Eptic

by Nick Watts
in Interview

Eptic (otherwise known as Michael Bella) is one of Dubstep’s bright young things. The Belgian producer, who is exclusively signed to Never Say Die blasted onto the bass scene two years ago, causing quite a stir with his unique, weighty sound. His last EP ‘Doom’ gathered great critical acclaim and rightly made serious impact on the Beatport charts. Currently, he has a new track ‘Space Cats’ that will be featured on Never Say Die and UKF’s ‘Vol.3’ compilation and he will be joining label-mate Zomboy on his Outbreak tour later this summer. This hugely popular artist also has a faithful set of followers, and has just celebrated hitting over 200,000 Facebook fans. We caught up with Eptic to get the lowdown on his music, cats and crazy fans.

Congrats on hitting 200k on Facebook! Out of the massive amount that follow you, have you come across a #1 fan that stands out from the rest?

Thanks, I’m still amazed by it! There are a few fans who have really amazed me, The one that still baffles me though is the guy who tattooed my lobster autograph on his side. (laughs)

Never Say Die gave us a sneak peek of ‘Space Cats’ out 23rd June on the NSD x UKF Vol.3. What was the idea behind the track when writing it?

For some reason I’ve always been fascinated about cats in space, half of all the drawings in my sketchbook are of felines exploring the never-ending abyss. (See below)  So, when I finished the tune I just switched my brain to total random mode and called it ‘Space Cats.’ There’s not really a big concept behind the track otherwise. 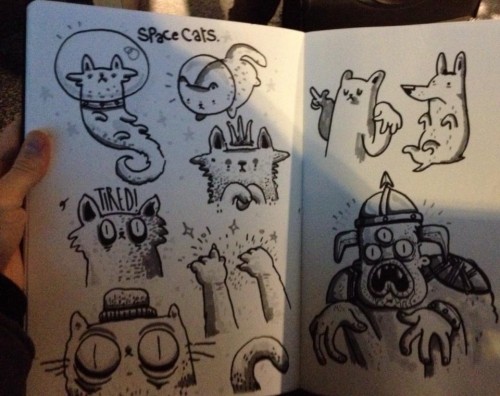 We see you post cat images a lot (our favourite was by Habstrakt), do you have a cat yourself? If so, got a picture?

Yeah I got one of the best cats around, his name is Pawl. I love him because you can do whatever with him, he just doesn’t care! Here’s a pic of him in a McDonalds bag. 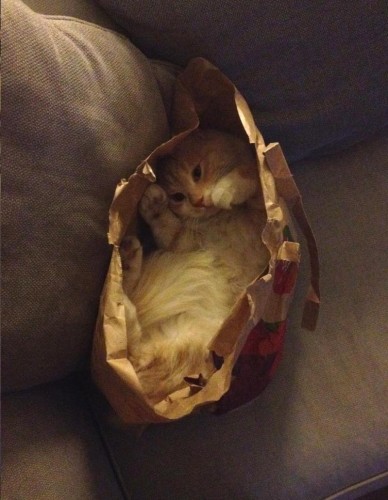 Can we expect an EP or any collabs after the compilation release?

I’m cooking up a lot of things at the moment. There’s a sexy collab with Datsik I’ve been working on for a while, which I’m really excited about! Collecting and finishing lots of stuff for another release as well, can’t leak the beans on that on yet though, just be sure to keep your eyes peeled!

You are about to embark on a hefty tour with Zomboy… What three tunes are a must in your set right now?

With TC and Cookie Monsta joining the tour as well do you think there could be a collab on the cards?

I really hope so, I’ve been switching out ideas with Cookie Monsta for a while so we should be able to come up with something awesome! I’d love to get going with TC as well, he’s always been a big inspiration to me! Never really had the balls to ask him haha 🙂

Thanks for speaking with us, can’t wait for to see what else you bring out this year! Listen to ‘Space Cats’ below.

Your EDM Exclusive Minimix: Lunde Bros will make you Jump Up [Free Download]

Your EDM Exclusive Minimix: Lunde Bros will make you Jump Up [Free Download]