by Your EDM Staff
in EDM News, Interview

After a long hiatus from DJing, Feed Me is back on the roads for his Psychedelic Journey tour, complete with his brand new Teeth design. I got to chat with the creative genius Jon Gooch himself on his most recent EP which was released last month, and picked his brain around his concept for the visuals surrounding his EP, tour and Teeth setup. If his tour stops at a city near you, be sure to check it out, and read the Chicago show review to get a taste of what you could be missing out on!

The four tracks in your latest EP, Feed Me’s Psychedelic Journey, represent consideration, recuperation, awakening and transcendence, which are the 4 stages you’ve felt while you were off tour. In addition to your inner state of being, what were some other influences for this EP?

It was written with the set in mind as well — I specifically wrote them as an audio-visual thing and I thought of how they would look and sound, what the moments would be, where the vision’s telling a story as well as the music. The EP was influenced by the chronology, the progression of the sound, the way it progresses over time.

For “Alarm Clock,” you wrote the lyrics and also provided the vocals. What’s the meaning behind the lyrics?

I found myself singing that on top of what I was writing without consciously meaning to, so it was quite organic. I didn’t really set out to deliberately do the vocals in the middle there. It’s kind of an odd structure as well — the track begins and ends with a much more dance-y section and there’s more of a breakaway in the middle. As far as the message of the song, I suppose it’s all focusing on things I think are important, which is looking after each other and that sense of unity. I’ll be singing it live in the show.

The graphic design for your album cover and posters are really distinct with a colorful retro feel. What was the idea behind the artwork?

I always wanted to have a theme for my artwork rather than produce a generic flyer. I was sitting with my manager and looking at old tour posters that we really liked, like Grateful Dead and Jimmy Hendrix, and they’re all silk-screened with simple, vibrant colors and a lot of hand-drawn topography; you could tell someone took a lot of thought to plan it out. So we thought it’d be nice to take a retro-classic look — a timeless feel. It was kind of separate from the actual concept of the show, since the poster is not necessarily psychedelic. Well, maybe it is if you look at it long enough. The retro theme was taken from an art history perspective, and that’s always been interesting to me. It was really fun to do and I enjoyed it a lot. 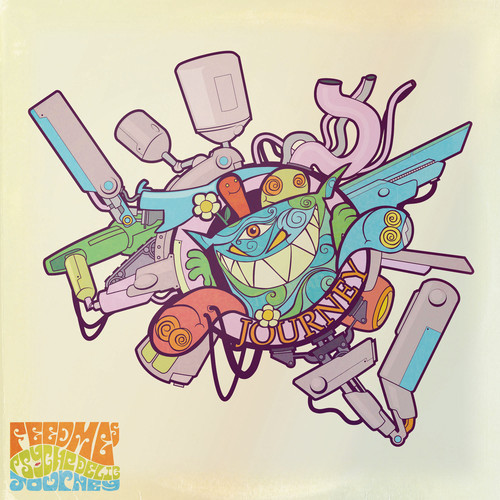 What are all the intricate gadget-like things that surround the Teeth in your EP cover art?

The idea was to actually pull the design of the actual teeth structure together with the classic design of the poster. The mechanism and machinery are surrounding the teeth, a representation of the arms and mechanics when I’m playing. I had a longstanding interest in anime and manga and science fiction, and I’ve always enjoyed drawing mechanical and functional, robotic-looking elements.

Regarding the visual performance for shows, you believe that the visuals should be telling a story, and as you mentioned, you usually have a visual in mind when creating your tracks. Your EP already tells a story, but your live show is much bigger than your EP. What kind of story do you want to tell with your Teeth visuals?

Any show should have an element of being a journey. You should feel like you’ve gone somewhere and didn’t just remain static and had a list of tracks thrown at you. I worked quite hard on the track list in the way that tracks kind of flow and have a sort of shape, which is the most important thing. There’s moments of calm where you can relax a bit and you don’t have to be dancing up and down, although some people do that anyway.

With the kaleidoscope of music I make, I think it’s important to have moments where you can chill out. Hopefully it’s a journey, where you can feel the peaks and troughs and hills and valleys, and you move through it. I don’t want people to think I’m just standing there blasting track after track without any kind of order, or without any relevance to what was before or after. 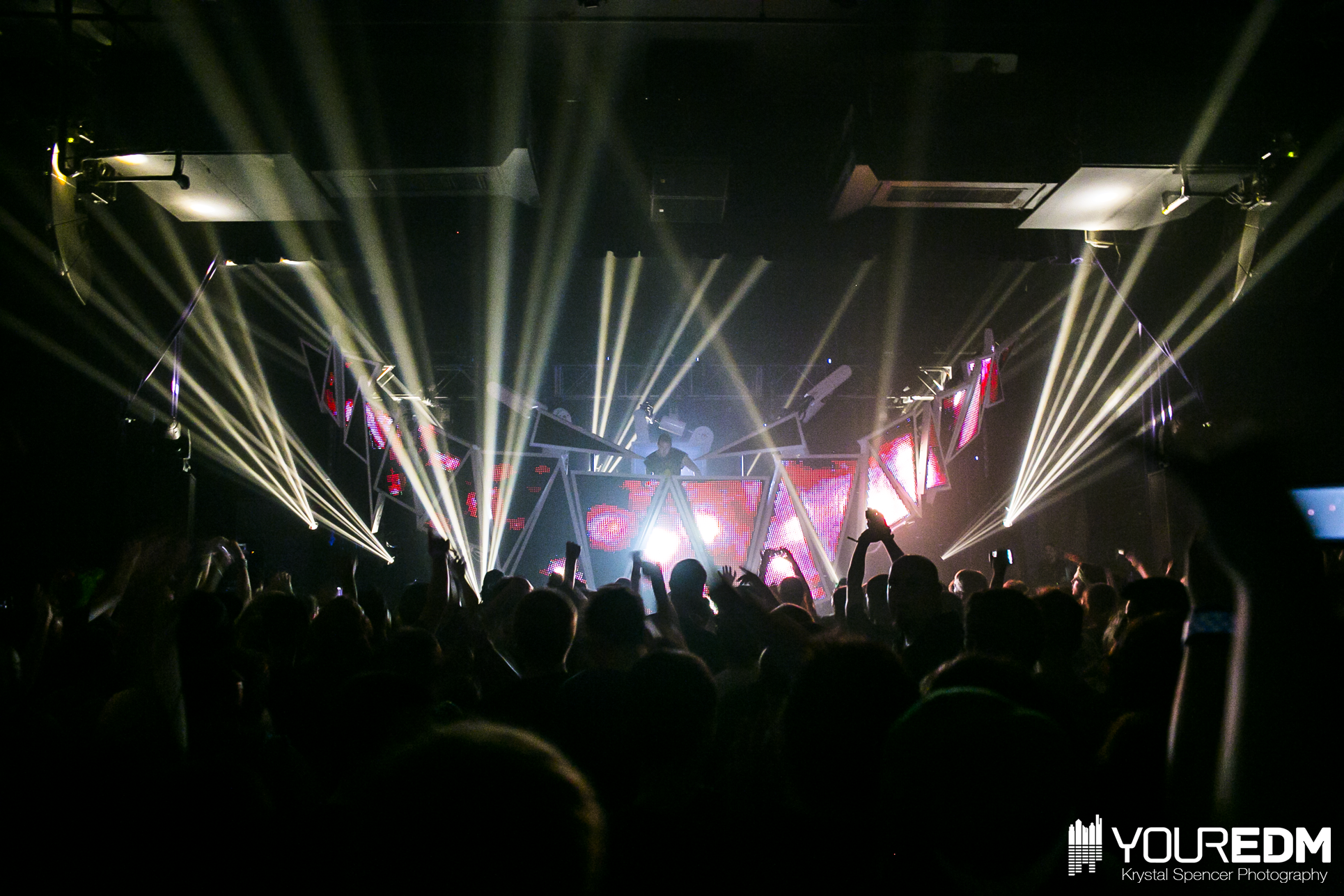 How are your visuals coordinated with the music?

We use custom software that was written specifically for the show. Each track has a visual assigned to it, to the point where if I change the tempo or loop part of the track, the visual will do the same thing. In essence, it’s almost like mixing with video as opposed to audio, from an art perspective. There’s also a separate channel where I can add more visuals or filter the visuals that are being displayed. It’s really fun to do and it’s a part of what I wanted to do. I wanted it to be visually apparent that I was doing things; I didn’t want to look redundant just standing there. I don’t know what I’d do with myself if I were on stage without anything to do.

You create different visual versions of tracks for each show. What prompts you to make these edits, and what kind of changes do you make?

We’re fortunate to have people filming my show and putting it online in little clips. So sometimes if I’m wondering what a certain visual looks like from a certain angle, my visual guy from Studio Rewind and I can normally find a visual reference. If we see that a color clashes with the next track, we can always go back in and edit that, or if there’s a piece of the track that’s too sparse or too dense, we can edit that as well. I always seem to add things in last minute before we leave for the tour, and the whole thing gets more polished as we go. Since I last did this, the show’s been completely rebuilt from the ground up so it’s been a learning process for everybody, from the construction to the visual aspect and also my performance. 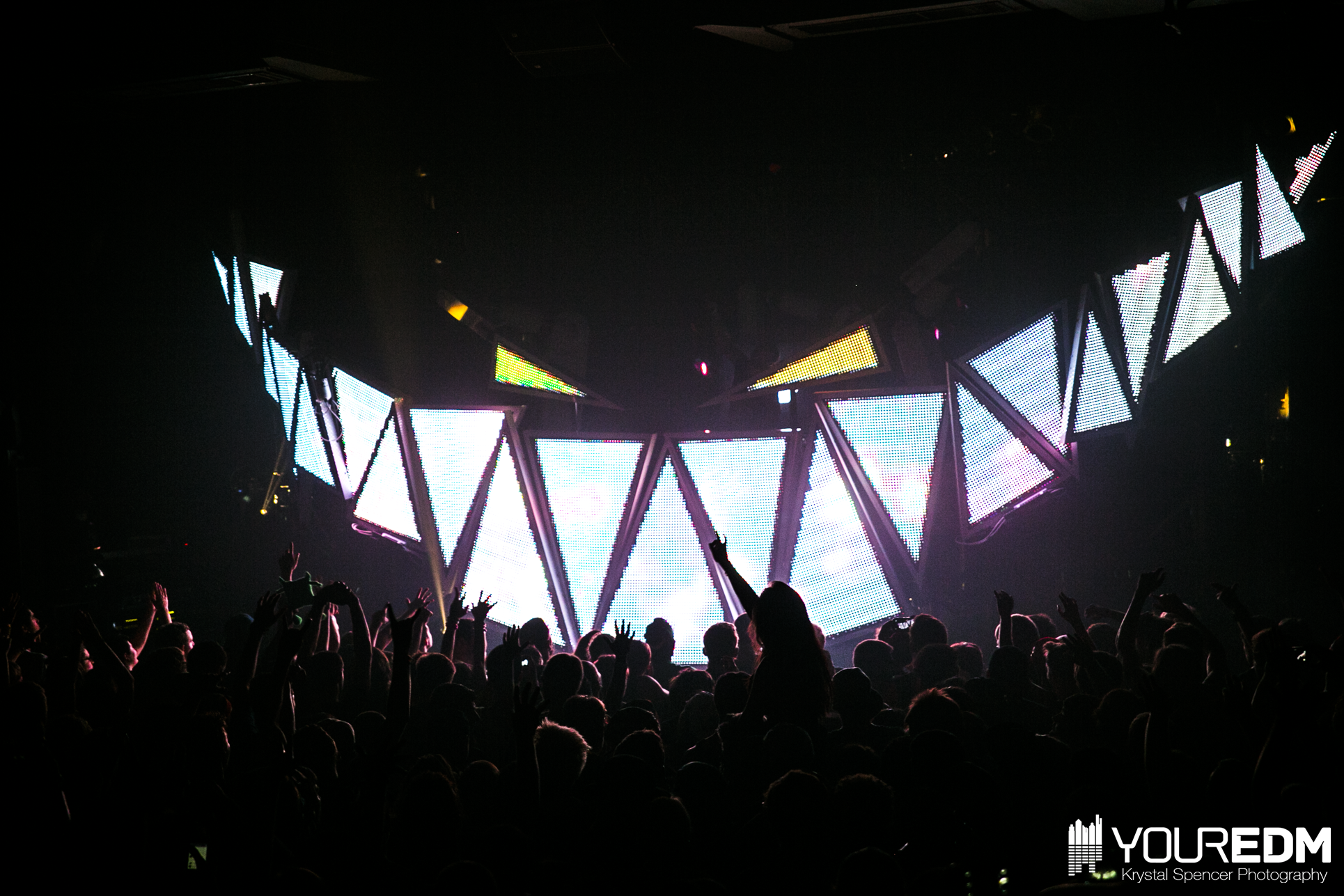 Feed Me’s Psychedelic Journey is the second album off of your own label, Sotto Voce. You created this label to release music under your Feed Me alias as well as for other aspiring artists. What do you look for in artists that would represent your label?

It’s more than just the sound. I’ve been fortunate to find people so far already who fit really well. When you live doing this all the time, you have to very good at multi-tasking. It’s not just a case of being able to knock out some very good tracks or being particularly gifted in one area because you have to be out on tour, be socially apt and be on the pulse. It’s looking for people who can really join on a crew level and actually keep up.

So far I’ve got an album from a Chicago artist called Zeros — he’s someone I’ve worked with on and off for a really long time, so he was an easy go-to, as I’ve always admired his music and he fit really well. He’s great at pushing the show beyond DJing and looking for new technology. Definitely an active mind, someone who’s really good to have around, very inspiring to listen to. And TIJANI, he’s been supporting us for the whole tour so far. He’s someone I’ve known from shows, really dynamic and hyper intelligent, huge personality. He’s so much fun to watch play.

There’s more to it than getting a demo. It’s more of a longer decision. But I have been getting some great stuff, with kids giving me their USB sticks. Hopefully in the next couple days we can go through a lot of it.

The recent mixes by TIJANI and Zeros definitely bring something fresh that we haven’t already heard before. And you also had a mix for Pete Tong, which included some tracks that haven’t been released yet. I’m guessing they’re from your next album, which is already in the works?

I have 2 or 3 singles almost done, and the album’s in progress. I’ve played a couple of those tracks in the live shows, which has been fun because it’s great to see tracks that have never been heard before get a really good reaction from the crowd. That’s always the most satisfying moment, when you’re playing something for the first time and the crowd’s all getting into it. My next track is actually with Kill the Noise. We’ve done a track where we went to a school in London and recorded a whole school of children singing a song we’ve written, and we got them to be in the music video as well, which is being animated at the moment.

We definitely look forward to what Feed Me will come up with next! If you want more of Feed Me in the meantime, check out his show review from his stop at Chicago’s Aragon Ballroom.