“High above the grassy parkland on Randall’s Island—site of this weekend’s Electric Zoo music festival—hangs a robotic camera so powerful it can read text on a note pad 80 feet below.”

The weekend for Electric Zoo is finally upon us. As such, it’s interesting to look at how promoters Mike Bindra and Laura de Palma are going to be handling their harsh anti-drug policies at the festival. The deaths of two attendees last year caused the festival to shut down a day early, and promoters and city officials are doing everything in their power to make sure there isn’t a repeat of such an incident this year — even if that means treating festival attendees like little children. 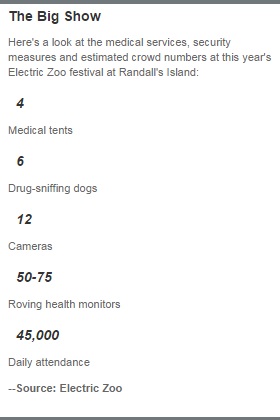 The amount of security this year is comparable to a tightly watched airport, rather than an open-air music festival. I understand the need, and the pressure, that Electric Zoo is facing from city officials and worried parents to make this a clean and safe experience, but I don’t believe that you need to treat attendees like children to do so.

Back at the entrance, attendees will need to view a two-minute Public Service Announcement before they activate their entry bracelets, which are dependent on a code revealed at the end of the video. The film depicts a man on the dance floor who suffers a dramatic adverse reaction after ingesting a white powder.

It’s utterly reminiscent of the DARE campaigns that we watched in elementary and middle school. And you know what’s funny? Most of my friends who watched those videos or participated in the programs now use drugs recreationally, or at festivals. Scare tactics have been proven to fail in the long term. Once again, I understand the pressure that festival promoters are under. They have no choice but to demonstrate that they are doing everything in their power to keep the problem under control. The easiest way to do that is to make sure that their efforts are seen — i.e., large medical tents, a roaming security team, aerial camera drones, and a large command center off-site.

However, amidst all of these “scare tactics,” they’re doing some things right.

Festival organizers are also considering the use of so-called drug amnesty bins. The bins would allow people to safely jettison contraband to avoid arrest. […] the decision to push back the festival’s start time from 11 a.m. to 1 p.m., minimizing their exposure to the sun. […] The event’s ranks of roaming security officers and teams of paramedics will be joined by 50 to 75 pre-med, nursing and emergency medical technician students who will be designated “zookeepers.” They will stand ready to help anyone showing signs of trouble, officials said.

So at least in the less obvious ways, Electric Zoo is stepping up and showing that they actually care about their attendees. Don’t get me wrong, I will be beyond happy if no deaths are reported this weekend. I can’t even begin to explain how happy. Yet, at what cost? I don’t mean to sound like a conspiracy theorist or someone who feels completely jilted by the festival organizers — I’m not even attending the festival, but I have friends who are — I just want everyone to have a good time and be safe. Our community is already under enough scrutiny as it is, we shouldn’t give anyone else another target for their magnifying glass. The festival begins at 1 p.m. today, and I implore all attendees to stay hydrated, have a good time, and prove that we don’t need to be treated like children in order to enjoy ourselves as adults.

You can find set times for the festival here.

Dave All The Rave – Language of Rave

Deadmau5 Pulls Off Techno Set At Ibiza, Promises We’ll Have Our Hands On It Soon

Deadmau5 Pulls Off Techno Set At Ibiza, Promises We'll Have Our Hands On It Soon